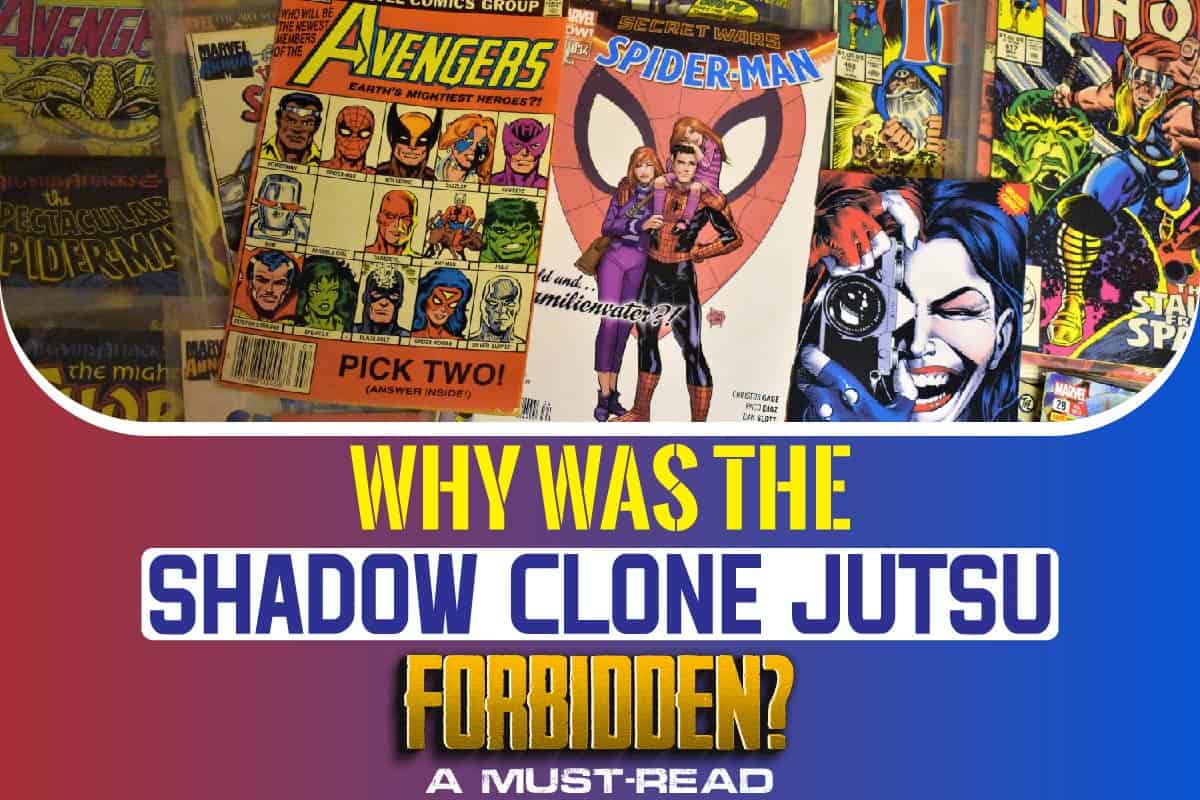 If you love Japanese comics, you would love Naruto. Naruto closely follows the story of an orphan – Uzumaki Naruto.

Naruto would go on to master many ninja techniques (or Jutsu). His favorite technique was the shadow clone Jutsu.

The shadow clone Jutsu was, however, a forbidden technique. Now, the million-dollar question is why?

So, why was shadow clone Justu forbidden?

Why was the shadow clone Jutsu forbidden?

The shadow clone technique was a forbidden Jutsu because it splits your chakra equally among all the clones.

You will find this strange if you don’t follow Buddhism or Japanese culture.

We will break this down in the next section. Continue reading to learn more.

What Is The Shadow Clone Jutsu?

The shadow clone Jutsu – also known as Kage Bunshin no Jutsu – is forbidden because it can cause harm or weaken the user.

Forbidden Jutsu is a technique that can weaken or cause great harm to the user.

The shadow clone Jutsu is a technique that creates clones of a person by splitting their chakra.

So what is a chakra?

Chakra refers to the various points of life or energy in a person’s body. It means wheel or disk. These wheels or disks spin energy that corresponds to different nerves and organs in the body.

Chakra is necessary for even the most basic Jutsu. Chakra has a limited amount in the average ninja. Therefore, to fight effectively, a ninja must know how to manage chakra in a fight.

Creating clones from one clone by splitting their chakra will reduce the number of chakra in one ninja. So the shadow clone technique for the average ninja takes a lot of strain on their chakra.

The ninja may end up losing all their chakra. As a result, the shadow clone Jutsu was forbidden.

If the shadow clone Jutsu can weaken a ninja, why was Naruto able to use it effectively?

Why Was Naruto Able To Use The Shadow Clone Jutsu?

Naruto hails from the Uzumaki tribe. The Uzumaki clan are descendants of Asura Otsutsuki, who have close ties with the Senju clan.

The Senju people are popular for their fuinjutsu. Fuinjutsu is also known as the sealing technique.

The Uzumaki were the most prolific at using this Jutsu. They were also known as the clan of longevity.

One can trace Naruto’s extraordinary ability to his Uzumaki roots. Naruto can use the shadow clone Jutsu and even multiple shadow clones with few adverse effects.

The longevity of the Uzumaki is a product of their strong life force and abundant chakra reserve.

Naruto inherited these abilities, including swift healing and recovery ability. As a result, he can split his chakra into multiple portions and still have enough reserve left.

So, apart from the shadow clone Jutsu, what other Jutsu are forbidden?

Some Other Forbidden Jutsu

There are diverse forbidden Jutsu that can cause harm to the user. However, different characters still use some of these techniques to gain tremendous power.

Let’s consider some of them.

This Jutsu is meant to take the life of both the user and the target at the same time.

Orochimaru taught Anko how to use this technique in the Naruto series. Anko has attempted to use the Jutsu on a few occasions but has never completed it.

This technique allows the user to blend substances with chakra for a particular purpose.

This technique is unique to Iwagakure, also called the Hidden Stone Village.

Deidara used this technique in the series. He often blended chakra with clay, through his mouth, in his hands, and on his chest.

A technique originated from the Hidden Waterfall Village. Kakuzu stole this Jutsu, and it is the reason for his grotesque appearance.

He is immortal, held by a black string, and can attach five hearts to himself.

The Japanese name translates to reincarnation. And it’s a technique that can resurrect the dead via exchange of life. The life at stake, in this case, is the user’s life.

Chiyo of the Hidden Sand village used this technique to bring Gaara back to life.

Cursed Seals of Heaven And Earth

This technique enables the user to gain dominion over his targets. It also enables the victims to boost or gain potent powers.

The most powerful of these include the seal of heaven used on Sasuke and Anko by Orochimaru and the seal of Earth used on Kimimaro.

Strength of A Hundred Seals

Medical ninjas were the foremost users of this technique. It allows them to concentrate their chakra at a point over many years.

Tsunade Senju mastered this chakra and passed it onto Haruno Sakura.

Release of this chakra increases healing ability and power output. It can also help them to recover immediately, even from life-threatening injuries.

Naruto Uzumaki developed this technique. It was an improvement to the Rasengan, which his father developed and passed down to Jiraiya.

The Rasenshuriken added wind release to the Rasengan. This technique is so powerful that it causes damage to the target at a cellular level.

The downside is that it also does similar damage to the user. Naruto was able to overcome this by learning how to throw the Rasenshuriken from a distance.

The second Hokage developed this technique. The people usually regarded Tobirama Senju as the genius Hokage.

This technique is usually combined with the Edo Tensei, another technique he developed.

It took advantage of the regenerative abilities of the Edo Tensei bodies. It turns their bodies into infinitely exploding bombs. When used on a living body, it takes their life.

Uchiha developed this technique. It allows the user to put the target in a never-ending genjutsu.

The target can break it upon self-realization. This technique can result in the permanent loss of sight in one eye.

This technique has similarities with the Izanami and can turn genjutsu into reality.

It has the same cost as the Izanami, the loss of sight in one eye permanently.

The dead user usually uses this technique to rewrite events.

This Jutsu is a sealing technique seen as one of the most powerful. Minato was the first ninja to use it when he sealed nine tails.

The Third Hokage, Sarutobi Hiruzen, also used this Jutsu to seal the first and second Hokage together with the arms of Orochimaru.

ISarutobi was called the professor because he mastered a lot of Jutsu.

Uzumaki surprisingly developed the reaper death Seal. This technique is a double-edged sword of sorts: executing the contract and taking the user’s soul.

This Jutsu is a very powerful technique that allows the user to bring the dead back to life.

It gives them a body that would always continue to regenerate, making them almost impossible to defeat.

The only way to defeat an Edo Tensei is if they give up or if they are sealed. The second Hokage developed this technique.

Kabuto used this technique effectively in the great ninja war in Naruto Shippuden. With technique alone, they were able to carry out an all-out war.

This technique is similar to the Edo Tensei in that it can also bring the dead back to life. However, unlike the Edo Tensei, the users have mortal bodies.

Only someone who possesses a Rinnegan can perform the Rinne Tensei. The Rinnegan is the most powerful ocular ability in the Naruto universe.

A Rinnegan can only manifest In someone that has both the genes of Asura and Indra. The people usually refer to a possessor of these abilities as the Sage of the Six Paths.

We saw Nagato first use this technique after his discussion with Naruto. Kakashi was amongst those brought back to life by this ability.

Naruto is a popular Japanese comic series. It follows the life of a boy who, against all odds, vows to get the recognition of his people.

It is generally a forbidden technique. A forbidden Jutsu is a technique that can potentially harm the user.

The shadow clone Jutsu is a forbidden Jutsu because it creates clones of the user by splitting their chakra. Chakra refers to energy points in a person’s body.

Generally, ninjas have limited chakra, so splitting them can strain the body, which can be fatal.

Naruto and the rest of the Uzumaki, though, are exceptions. They have large reserves of chakra.

There are a lot of other forbidden techniques in the Naruto Universe. Some examples include the twin snake sacrifice, the Earth fear grudge, the Rinne Tensei, and the Edo Tensei.

Other deadly Jutsu include the mutually multiplying explosive tag, the reaper death seal, and the Izanami and Izanagi.

This Jutsu can cause fatal damage to the user. Some ninjas with special abilities are exceptions.