How Long Do Beets Stay In Your Urine: Facts About Beeturia You Didn’t Know! 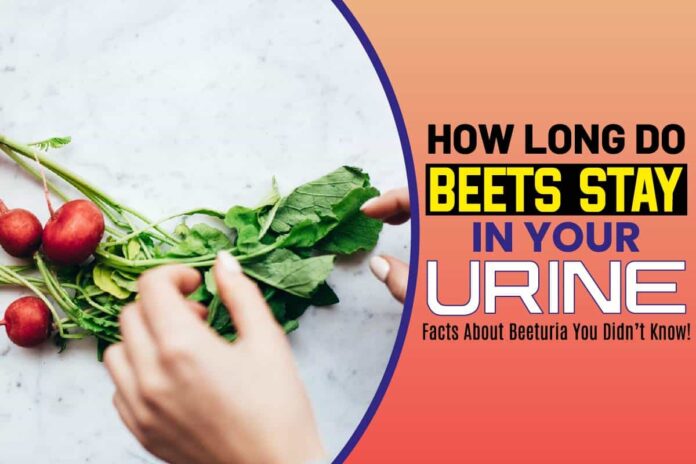 Beets are great root vegetables with a ton of health benefits, but most importantly, they’re delicious. Since you’re here, we’ll take it that you’ve had a few extra servings of beet hummus last night and had a good scare in the toilet this morning.

Relax. We’re here to tell you what red urine after having beet says about your health and also answer how long do beets stay in your urine.

Normally, beets will stay for two to four days in your urine. Before we give you a detailed answer, it looks like you have Beeturia- red urine that contains pigments of consumed beet. Scroll down to the Beet test part and see what it means for your digestive health!

Why Does Beetroot Make Your Pee Turn Red?

Not every day do you get to see red urine. But, what do we know – it’s 24/7 Halloween in the beet world! If you’re wondering what’s up with beets and, of course, your urine, make sure you keep reading till the end!

During our digestion process, our body breaks down all the food into the smallest possible units. This is how the pigments get exposed after we have beet juice and basically every other artificially dyed food.

Anyway, these pigments get dumped in our bladder alongside the usual liquid waste. This is how beetroots turn our urine red.

The Science Behind Beets: How Come Beets Are Red?

It’s not a question that will keep you up at night. But the knowledge is worth it, even more so when you want to be friends with someone like Dwight Schrute.

The hues of betalain make beets the rich red color they are. As of now, betalain pigments can be sorted into two categories:

When we slice beets or dragon fruits, we see a deep red/purple color. Yes, it’s the betalain pigment like we talked about. This specific red tint is called betacyanin, and beets can’t seem to have enough of it!

Jokes aside, the betacyanins found in the plant world can be further classified as betanin, neobetanin, isobetanin, and probetanin.

These yellow to orange pigments are also present in beets. However, the amount is so low that beets eventually take the color of betanin. And that’s why beets are red!

The usual color of our urine is a color called urochrome. It can be colorless or a pale to a deep shade of yellow. Well, that was before you went to town on beets.

In a few hours after eating beets, your body will defy all odds and produce urine that’s either pink or red. In the past, people who have had orange urine had a similar experience with carrots, but that story is for another day.

Beeturia is a condition when your body cannot break down the pigments (betanin) present in beets, and therefore, it passes them in the form of liquid waste. It’s actually not a rare phenomenon, and plenty of people will stuff themselves with beet just for the fun of it.

How Long Does Beeturia Last?

It takes about two to four days for an average person to get beets out of their system. But, don’t worry. It’s not that self-deprecating “a moment on the lips, forever on the hips” situation.

How long your body takes for all the red pigments to flush out depends on a few things. For one, if you have healthy bowel movements, you can expect the first round of crimson pee in a twelve to twenty-four-hour window.

What Is The Beet Test?

The beetroot test is a simple, at-home assessment of your digestive health. Since beets are quite pigmented, they will likely show in your urine. The test requires that you eat a raw beet and see how long it takes till your poop is red.

Health experts considering a 12 to 24-hour “transmit time” healthy. If it’s taking much longer than 24 hours, it means you’re constipated, or you’re not drinking enough water.

If it takes less than 12 hours to do a red poo, you might have an absorption issue. It could also mean that you’re stressed or drinking way too much coffee.

What Beeturia Says About Your Health?

The intensity of beeturia varies from person to person. Some people will have pink-colored urine, and some will have red. To describe why beeturia doesn’t happen to everyone who just had a glass of beet juice, we’ll have to backtrack for a moment.

So, remember betalains, the pigments responsible for the color in beets? They’re made of an amino acid called tyrosine. It’s a structural unit for many pigments, alkaloids, and quinones. Now, amino acids, or tyrosines, in this case, are organic proteins (Information we’ve slept through in our 8 am. science classes).

When your body soaks up most of this amino acid, it’s a sign that your body is not getting enough of it. Our digestion system tries to break down all the food we intake, retain the nutrients we need, and release everything else as a liquid or solid waste.

So, when you see beet-red urine, you could have some sort of iron deficiency going on. But, wait. There are more things that can be associated with beeturia. Here, have a look.

The Link Between Beeturia And Iron Absorption: When To See A Doctor?

According to a study, 66-88% of the people who have experienced Beeturia have untreated iron deficiency. In fact, about 12% of the population was affected by beeturia at some point in their lives.

If you haven’t been diagnosed with iron deficiency yet, now would be the perfect time to see your doctor. You can check for more symptoms of iron deficiency other than Beeturia from below.

Seeing two or three of these symptoms doesn’t necessarily mean you have iron deficiency anemia. However, if discoloration often happens after eating beets, go visit your doctor. She’ll know better! And, hey. Don’t be a bundle of nerves. Treatments of iron deficiency anemia can take effect in just one week!

Can Beetroot Damage Your Kidneys?

Beet juice is incredibly popular worldwide for its detoxifying properties. It’s known to reduce high blood pressure, protect your skin from signs of aging, and whatnot.

The benefits of beet also include improved digestive health and immunity. Last but not least, beets are low on calories, and therefore, a glass of beet juice might just help you lose weight after all.

However, beets have a good number of oxalates – a substance that promotes the formation of kidney stones in men and women. If you have a genetic history of kidney problems, decreasing your beetroot consumption will be great.

How Do Doctors Diagnose Beeturia?

At this point, you already know beeturia is more serious than it sounds. It may point towards an underlying health condition that needs to be checked immediately.

However, you can stay assured that your doctor won’t rely on a “DIY beet test” you took at home – especially by accident. What if another condition simply happened to take place at the same time? There’s only one way to see for sure if it’s Beeturia or something else.

Any one or two of these tests might be coming up when you talk to your doctor about red urine:

In most cases, the doctor will ask you to do a urine test, a stool analysis, or both tests at once. These tests require collecting a sample of your stool and urine and checking them at the lab afterward.

This test is for checking your stomach acid level. Although, most of the time, doctors will run a Complete Blood Count (CBC). It examines the number of red blood cells you have in your body.

A lower RBC count will confirm your iron deficiency anemia. However, if the reports are looking good, it’s truly beeturia- just your same old urine with betanin.

How Is Beeturia Treated?

Like we said before, beeturia itself is not a medical condition. It’s the possibility of an underlying illness that gets us worried.

Medical conditions like anemia, acidity and low metabolism contribute to red urine after eating beets. You must treat these conditions to get rid of Beeturia.

Doctors may recommend iron supplements, contraceptives, and antibiotics to replenish your iron level and RBC. Similarly, by increasing your betaine HCL intake and reducing H2 blockers, one can control their stomach acid level.

Overall, treatment will vary depending on your age, test reports, and previous medical records. The good news is — unless it’s a genetic condition, illnesses associated with Beeturia can be fully treated.

After eating beets, healthy people with pink or red-colored urine can simply drink up more water and flush out those pigments. So, red urine is nothing to worry about if you had beets two to four days ago. Because that’s how long beets stay in your system! Eat healthy, and thanks for reading!

Jakehttps://talkradionews.com
Jake is a passionate entrepreneur and writer who likes to spend a large chunk of his time researching, reading and writing. He aims to keep web surfers engaged with the latest news and articles on a wide range of topics. When he's not writing, he's busy catching a tan on the beach in Florida.
Previous articleWhy Was The Shadow Clone Jutsu Forbidden? A Must-Read
Next articleDo Hot Cheetos Give You Cancer? Read This Before Buying Your Next Snack

Can You Laminate Your Medicare Card? Here’s All You Need To Know About Medicare

Do Hot Cheetos Give You Cancer? Read This Before Buying Your Next Snack

Are Social Democracy And Democratic Socialism The Same? The Answer Might Surprise You!