Was Ulquiorra The Strongest Espada? Everything You Need To Know 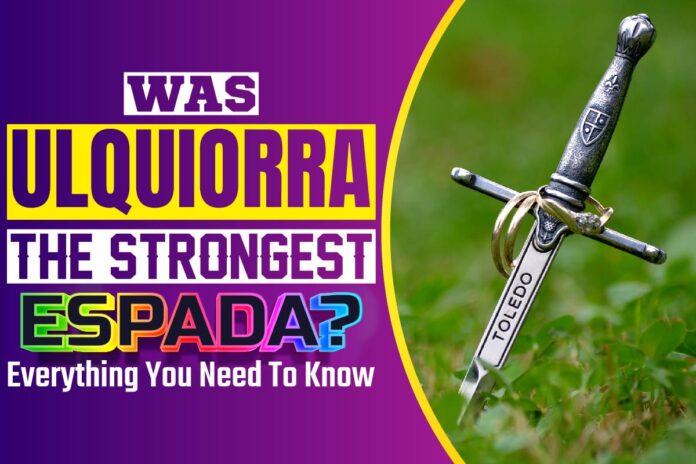 The answer to the question on everyone’s lips can’t be answered in a simple yes or no manner. It depends on a lot of factors.

Some people are stronger than Ulquiorra in the anime show Bleach, even though many people feel that he is the strongest.

Who Is An Espada?

The word Espada came about when two-faced captain Aizen betrayed the Soul society using his powerful Army of Espada, who happens to be the strongest in all of Arrancar.

With a mix of Shinigami and Hollow abilities, the Espada army is a diverse group that represents a different aspect of death: emptiness, loneliness, etc.

Their fierce powers, unique design, and personality is what makes Espada a fan-favorite villain.

Though, the Espada ranking system of 0-9 can be very misleading as some seem stronger than their position.

Aaroniero Arruruerie can grip dead hollows and collect their powers to evolve, and thanks to his procurement of Metastacia, he added Kaien Shiba’s abilities to his abilities.

Aaroniero is very skillful and cunning in his borrowed state as he displays his psychological advantage over Rukia by making her fight her former mentor’s image.

While sunlight revealed the true form of Aaroniero, you can quickly negate this weakness by selecting where and when to fight.

Furthermore, if Aaroniero had the opportunity to absorb the souls of his slain comrades, he would have been the strongest Espada of them all.

Like Aaroniero, we were not that fortunate to see Zommari in enough fights to know how strong he really is.

Even though he claims that he’s the fastest Sonido user amid all the Espadas, rivaling even the formidable Byakuya Kuchiki from Soul Society.

One of Zommari’s strengths is that he can quickly create clones that’ll help him assault his enemies on multiple fronts.

His release can control around 58 targets, turning friends into foes and making your body betray you. He had many opportunities to strike Byakuya if not for his pride, but he couldn’t take them.

Or is it the fact that his enemy’s Bankai perfectly counters his strength as it splits into many blades that cannot be controlled; Zommari should have posed a more significant threat to Ichigo’s comrades.

After Nnoitra was promoted from his previous position as the eighth Espada, he’s now become arguable the most ferocious of all Aizen’s Arrancar.

While he’s widely known for his fighting abilities (he almost beat the famous Kenpachi), he is also popular for shooting cero energy beams through his mouth.

Also, another great asset that Nnoitra has is his armor-like body which he uses to shrug off most attacks, and his massive Reiatsu.

Nnoitra is also one of the rare Espada that can regenerate, and in his release, he’s capable of spontaneously growing an extra pair of arms to conduct sneak attacks on his foes.

He’s also known for attacking injured foes, and this has made him a threat that you can’t afford to turn your back on.

Harribel isn’t a weak Espada, but her rank as the number three Espada seems a bit off as many people feel she doesn’t deserve it.

She was defeated by Hitsugaya, who is ranked lower in the Gotei 13 captain hierarchy. She later performed very well against Hitsugaya and the two Visored, as she used her water powers to fight against Hitsugaya’s ice mastery.

Furthermore, the well-respected and intelligent Harribel finally takes command of Hueco Mundo after Aizen was defeated. Also, she had the will to attack him after learning that he disregarded the lives of the Espadas.

Grimmjow is one of Ichigo’s formidable rivals; he is violent and ruthless. However, he goes out of his way to keep their rivalry aside to heal Ichigo and make sure they have a worthy fight.

His release is known to increase his already-powerful speed, resilience, and power; he also possesses the exceptional Desgarron ultimate attack while successfully sealing Ulquiorra via a Caja cube.

Some Bleach fans believe that Grimmjow intentionally allowed Ichigo to stab him during their final battle because they felt he could have ducked Ichigo’s last attack. However, that’s a debate we will talk about some other time.

Nelliel is Ichigo’s childhood companion, who eventually recovers her adult Nelliel state of mind and memories as the previous third-rank Espada.

She had a lengthy rivalry with Nnoitra and beat him on numerous occasions, and her symbolic Cero Doble ability allows her to reflect Ceros while she adds one of her own to the blast.

Unlike the rest of the Espadas, Nelliel has a fantastic sense of mercy and compassion.

Being on the side of Ichigo even after she regained her memories and her spiritual pressure, which was greater than that of Ulquiorra’s, to the extent that Renji momentarily confused the two.

In the beginning, Yammy was considered a weak Espada with a rank of ten that was overpowered by Ichigo’s Bankai. However, he gets an incredible power increase when he releases, and his power moves to zero.

Once Yammy transforms, he grows in size, looking like a Japanese Kaiju.

Back to back, he fights Rukia, Renji, and Chad before facing off with a weakened Ichigo then, Kenpachi and Byakuya, who are two of the most brutal captains before finally giving up.

Baraggan, who is the former leader of Hueco Mundo can instantly make anything he touches grow old. This enabled him to break the arm of Captain Sui-Fon by making it old and weak even though her lieutenant assisted her.

He also fought with the Visored Hachi whose barriers were crucial in blocking off Baraggan’s assault.

Barragan’s abilities are so great that they make most missiles powerless against him because he’ll age them into irrelevance.

Only Hachi’s cleverness was enough to allow the Shinigami to triumph against him narrowly.

On many people’s lips, the number one question is, why is Ulquiorra Cifer ranked so low compared to what he can really do?

The simple answer is that Aizen did the ranking based on everyone’s first release and Ulquiorra Cifer possesses a second release that Aizen hasn’t yet seen.

With only his first release, Ulquiorra destroyed the hollow Masked Ichigo. Ulquiorra has impressive speed and strength and is a unique Espada because of his regeneration powers that grant him supreme endurance.

He’s one of the smartest Espadas, and once his green lances explode, it’ll cover a vast radius.

Like his half Lilynette, Starrk has everything needed to succeed, like power, intelligence, and speed. He fires the fastest and strongest Ceros of all the Espada and can unleash his dual pistols on them as long as he’s in his released form.

Furthermore, he can call upon an army of mystical wolves who blow up after biting their mark. Surprisingly, Coyote is a relaxed and a kind Espada that doesn’t buy too much into Aizen’s ideology.

In the battle for supremacy, Coyote did battle with two formidable captains, Kyoraku and Ukitake, and two Visored, which he almost won.

In fact, he was an honorable fighter that granted his foes the chance to escape while they continued to backstab him.

With his incredible speed, rapid-fire Ceros, and unrivaled intelligence, Starrk has an accurate numbering that makes him the undisputed number one and strongest Espada currently.

What Happens To The Espada In Bleach?

The producers cut Bleach’s anime series short, though its manga continued compared to other anime series like Dragon Ball and Naruto.

At the end of the day, we found out that it wasn’t all the Espadas that had left. Usually, Espadas don’t have emotions. However, their exceptional personalities and odd moments of compassion will prove otherwise.

Furthermore, too many fans of the Bleach anime series signify the high point of the anime series, providing worthy opponents for the Gotei 13 captains and Ichigo.

We’ll know if Bleach will return to finish its show with time because there are many questions left unanswered.

Some Facts You Never Knew About Ulquiorra Cifer

There are many things many people don’t know about Ulquiorra Cifer, and I’ll take you through some of them to keep you informed.

One of the vital features of Ulquiorra Cifer is his ability to heal his damaged body in less time. Once injured, before the enemy realizes what is going on, he has healed himself.

For instance, if you recall, when Lorde Ichigo tore his arm, Ulquiorra quickly rebuilds it in record time to fight again.

Ulquiorra Cifer has a fantastic speed in combat that is unmatched in all of Bleach. For instance, if you remember when he dodges every petal from Byakuya Kuchiki’s bankai and Senbonzakura.

Just like other top-level Arrancar, Ulquiorra Cifer can also create a Cero hollow energy blast, and his version is very deadly.

This was why Aizen prohibited the first four Espadas from using their resurrection within the dome.

Jakehttps://talkradionews.com
Jake is a passionate entrepreneur and writer who likes to spend a large chunk of his time researching, reading and writing. He aims to keep web surfers engaged with the latest news and articles on a wide range of topics. When he's not writing, he's busy catching a tan on the beach in Florida.
Previous articleWhat Do Australians Think Of Americans? The Dynamism Of International Relations
Next articleCheck Out These Common Chinese American Names

Does AutoZone Do Oil Changes?

Are K Swiss Good Shoes? Should You Buy A Pair?

Why Did Friends End?