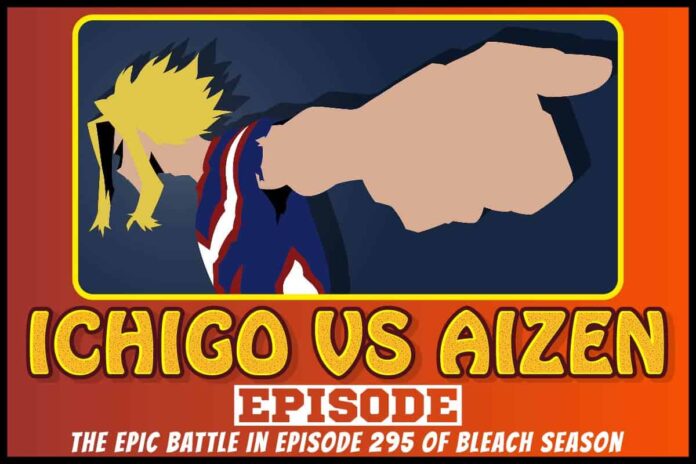 One of the reasons why Ichigo decided to return to fight Aizen. After an unsuccessful first attack, Ichigo had returned to hollowfies and to deliver his “Getsugatensho” against Aizen. The second attempt was very eventful, giving the followers lots of lifetime memories. This Asian animated movie series belongs to the animation genre initially aired in Japan and some other Asian countries before the English version was released to the rest of the world. Ichigo Kurosaki was acted by Johny Yong Bosch, while Kyle Hebert acted Aizen. Other famous characters include; Sajin Komamura, Shunsui Kyoraku, Marechiyo Omaeda, Shinji Hirako, Toshiro Hitsugaya, and Soifon which was performed by the famous actress Karen Strassman.

So Which Episode is the Ichigo vs. Aiden Fight?

The Aiden vs. Ichigo battle happened in episode 295 of the Bleach Season.

A Brief On Episode 295 Of The Bleach Season

Bleach season 295 had a runtime of 24 minutes in total. The season was released on April the 4th, 2013, in the United States of America. Three production companies handled the show, and are; Pierrot, NHK, and Shueisha. The Asian version of the show was released earlier. The soundtrack of the episode is “The Last Moment,” performed by SPYAIR.

The song was written by Momiken and composed by UZ. The episode was written by Tite Kubo- Manga. The battle between Ichigo and Aizen was interrupted by the appearance of the other lieutenants, and it could have been impossible for Ichigo alone to defeat Aizen. The war came to an end after several verbal and physical altercations between Aizen and all the lieutenants of the division.

Summary Of The Episode

Ichigo was able to break through the Garganta and arrives in Karakura town. He appeared behind Aizen and also used the opportunity to fire Getsuga Tensho’s powers at Aizen. The initial attack ended up hitting a barrier that appeared behind Aizen. Upon discovering Ichigo’s presence, Aizen greets Ichigo and also appears in front of Shinigami. The first attacks launched by Ichigo against Aizen missed him and hit some barriers instead.

Aizen immediately swings his Zanpakuto at Ichigo, who managed to dodge the attack. Aizen then told Ichigo that he had launched a good attack, but he didn’t pick the right target. Aizen also told Ichigo that a creature’s best blind spot is located at the back of its neck. He made it clear that he wouldn’t have gone into battle with Ichigo without proper protection.

Aizen tried to figure out Ichigo’s thoughts and guessed that if Ichigo had used his hollow mask, he would have won- Ichigo agreed with Aizen on this. Ichigo thought that he would have gone out of control once more if he had put his hollow mask on like what happened in the battle with Ulquiorra Cipher.

Aizen asked Ichigo to attack him, but with his hollow mask donned so he could prove to him that his thoughts were right. Ichigo obliged and immediately fired another Getsuga Tensho at Aizen, but Aizen dodged the attack again before appearing behind Ichigo.

Ichigo immediately moves away upon seeing Aizen behind him, then Aizen declares that Ichigo’s attacks on him are meaningless. Ichigo tries to understand what Aizen means by his attacks are meaningless, and Aizen makes him realize that his blades cannot reach him. Ichigo doesn’t believe and fires yet another Getsuga Tensho, but Aizen dodges it.

Aizen yet again appears behind Ichigo, who immediately moved away. Ichigo thought the timing for his attacks against Aizen was perfect and wondered if Aizen was protecting himself through the power of Zanpakuto. Aizen quickly made him realize that he wasn’t using Zanpakuto’s power but his natural instincts.

Aizen questions Ichigo why there is so much distance between them during the encounter, and he wonders whether Ichigo doesn’t want any part of him out of his vision. Ichigo replied to Aizen and told him that the distance between them holds no meaning. Aizen immediately appeared in front of Ichigo and touched his chest and even told Ichigo that he could touch his heart in an instance.

Ichigo immediately swings his Zanpakuto towards Aizen after he touches his chest, who dodged the blow and re-appear behind Ichigo. Aizen questions Ichigo why he wants to fight him, and he also tells Ichigo that he can’t defeat him if he continues fighting out of a sense of responsibility. He told Ichigo that fighting without hatred is like an eagle flying without wings.

3. Captain Komamura Appeared on the Scene

While the battle between Ichigo and Aizen continues, captain Sajin Komamura suddenly appears on the scene. He told Ichigo not to lose himself if he didn’t want to get killed. Komamura also told Ichigo the reason why the Hueco Mundo captains sent him to Aizen, but he wouldn’t let him see Aizen’s Shikai.

Most of the remaining Shinigami and Visored suddenly appeared behind Ichigo and told him they would protect him, but Ichigo to them the idea is crazy since they have all been injured. Shinji Hirako told Ichiko it would be a lot crazier to allow Ichigo to battle alone and that the battle belongs to every one of them. Captain Hitsugaya suddenly charges into battle and swings his Zanpakuto against Aizen, who blocks the attack with his Zanpakuto.

Aizen called captain Hitsugaya reckless for charging into the battle recklessly, but the captain replied to Aizen that the battle would not get anywhere if no one did something strange. Hitsugaya also commended Aizen for not using his Zanpakuto right from the beginning of the battle. Captain Kyoraku also swings his Zanpakuto at Aizen, but he quickly launches a barrier to block the attack.

Komamura tries to reassure Ichigo that all the statements Aizen made about him were wrong, and he commended him for holding forth in the battle before the appearances of other members of the clan. Komamura charges against Aizen once again, meanwhile Shinji promises to protect Ichigo, and in exchange, he wants Ichigo to protect things that he wants him protected. Shinji and other visors also left to battle Aizen.

While Ichigo stands, gazing at the battle, captain Sui-Feng tells him that the opening on Aizen wouldn’t last long, and Ichigo may lose his opportunity if he doesn’t take extra care. Sui-Feng made Ichigo realize that the battle is a fight for survival and to protect everyone from Aizen’s harm.

Sui-Feng warned Ichigo not to fall behind as she launched an attack at Aizen. Lieutenant Omaeda also runs after Sui-Feng to catch up with her at the battle. Ichigo also remembered the words of captain Kuchiki about protecting the Kamakura town. With this information in his mind, Ichigo eventually left the worries about the health of the Visored, and he believed that their combined strength would eventually help them win the battle.

Hitsugaya and Shunsui continued fighting Aizen, who mocked that their attacks could not hurt him in any way. Aizen particularly mocked Shunsui by telling him that he was doing well with his sneaks attacks. Hitsugaya also told Aizen that it is the duty of a captain to swing a blade down hence a “sword without hatred is like an eagle without wings” statement against Ichigo is wrong.

Hitsugaya also told Aizen that he doesn’t have what it takes to become a captain. Aizen replied by taunting Hitsugaya that he has the most hatred against him in the entire Gotei 13. Aizen also wondered if Hitsugaya had lost all those hatreds he had for him because lieutenant Hinamori had recovered enough to join the battle.

Kyoraku realized that Hitsugaya was beginning to be angered by the words of Aizen, and he tried to take advantage of the situation by launching his Zanpakuto at Aizen. Aizen evades Kyoraku’s attack and accuses him of being uncouth for attacking him in the middle of a conversation. Kyoraku responded, saying he was never good at listening, especially when a speaker is a man- she meant that listening could be too boring.

Hitsugaya activates his “Bankai” suddenly and angrily tells Aizen that he is correct. Hitsugaya further told Aizen that he had not come to fight but to destroy Aizen.

Though Gin had faked Aizen’s death to create a distraction for the lieutenants and this brought about a serious battle between them.

The Death Of Aizen

After a prolonged battle against the Soul Society and with the army of Arranca, Aizen was eventually defeated by Ichigo Kurosaki and was sealed away by Kisuke Uraha before he was imprisoned for his crimes.

Aizen was formerly a lieutenant of the fifth division under Shinji Hirako. The Gotei 13 had a difficult time dealing with Aizen’s death, but it was an inevitable situation that must come to pass to remove evil from among them.

Jakehttps://talkradionews.com
Jake is a passionate entrepreneur and writer who likes to spend a large chunk of his time researching, reading and writing. He aims to keep web surfers engaged with the latest news and articles on a wide range of topics. When he's not writing, he's busy catching a tan on the beach in Florida.
Previous articleIs Joico A Good Brand, Or Is It Overhyped?
Next articleIs Tommy Hilfiger A Good Brand, Or Does It Offer the Same Quality As Primark?

Is Chi Good For Your Hair? Everything You Need To Know

5 Tips for Staying Positive When Your Business is Struggling