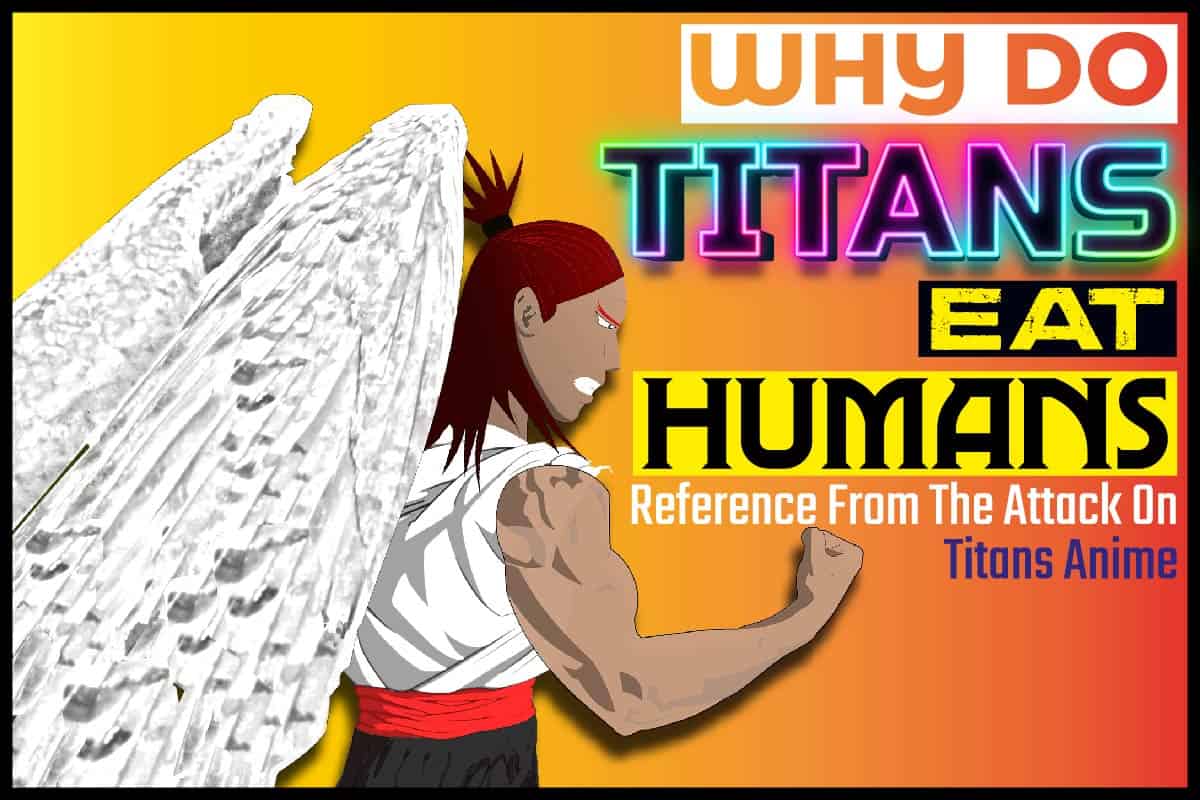 The attack on titans is an anime that has gained fame around the world. It explains the existence of titans and why they eat people. The giant humanoids act as the catalyst of the series. The series answers most of the people’s questions, including why titans eat people.

From the start of the Attack on Titan series, Titans have threatened to devour the whole of humankind. What most people took as a mystery is that the titans did not hunt and eat animals. Their only target was humans.

What is even more shocking is that they lacked the digestive tract. Titans got their energy from sunlight and not from eating humans. Therefore it led to the question, why did the titans eat humans?

Why Do Titans Eat Humans?

Most of the titans on the Attack on Titans series are pure titans. Despite lacking a digestive tract, these titans hunted and ate humans. Therefore it means that they did not eat humans for survival as they survived on sunlight energy. They ate humans because they subconsciously hoped that they would end up eating a titan shifter. The titan shifters had the power to transform back to humans, and that’s what the pure titans wanted.

Attack on Titans is a series where humans live inside cities surrounded by enormous walls to protect themselves from titans. The Titans were gigantic humanoid creatures who devour humans not for survival since they survived from sunlight energy. The pure titans ate humans, hoping that they would eat a titan shifter to gain the power to transform into humans.

The story revolves around Eren Jaeger, his childhood friend Armin Arhelt and his adoptive sister Mikasa Ackerman. Their life suddenly changes when a colossal titan attacks their home and kills Eren’s mother. Mikasa, Armin, and Eren vow to revenge the death of Eren’s mother. Therefore they end up joining the scout regiment that fought Titans outside the walls. Here is everything about the titans in the Attack on Titan series.

The Appearance Of The Titans

Titans had an appearance of nude humans, and some walked using two legs while others had four. They had similar features that you would expect to see in an average human. However, they had some deformities in body proportions. Some had enlarged heads and other small limbs.

Most of the Titans had vast mouths that they used to devour humans. Some of them had sharp teeth, while other had flat teeth. Almost all the Titans had a muscular body, and they all lacked reproductive organs.

Due to their lack of reproductive organs, the Titans were unable to mate like other humans. They did not have any interaction with any other organism except humans. The interaction that they had with humans was devouring them in search of a titan shifter. Their core mission was to hunt down humans and eat with hopes that they would eat a titan shifter and take their power. The Titan shifter possessed the power of transforming back to humans.

Creation Of The Titans

All Titans were originally humans from a race known as the Subjects of Ymir. The first Titan was Ymir Fritz, who fused with a strange spine-like creature in a tree. Ymir’s subjects are all distantly related to her, connecting them to the paths that allow transformation. Subjects of Ymir used to transform into Titans after being injected with Titan spinal fluid, which caused a near-instantaneous change.

Marley used to take advantage of this after the Great Titan War. He transformed undesirable Subjects of Ymir into Titans to use in battle or roam beyond the Walls on Paradis Island. Titans often resembled their original human bodies. However, women who got transformed into Titans lost most feminine body features.

The organic materials that comprised the Titans’ bodies appear to arise from nothing. Although, they were said to get delivered via invisible paths that transcend physical space. These paths linked all Ymir Subjects to a single “Coordinate,” the Founding Titan.

Subjects of Ymir could get personally transformed into Titans by the Founding Titan. It is how Karl Fritz created the Colossus Titans that made up the Walls. Due to his royal blood, Zeke Yeager could mimic this ability by screaming after administering spinal fluid to his victims.

Physiology Of The Titans

Titans’ bodies appeared to defy several known scientific laws, spontaneously generating both energy and mass. Their bodies were extremely light, giving them human-like maneuverability. Their high activity level and increased body temperature indicate a need for a massive energy intake to fuel them.

However, It appears that the Titans never needed to eat at all, even though most Titans devoured humans.  They had and used vocal organs, but they didn’t need to breathe to live. Titans relied on the sun as their primary source of energy.

Most of them became inactive when there was no sunlight. Individual Titans were affected differently by the lack of the sun. During experimentation, the captured Titan “Sonny” became docile after only an hour of deprivation.

In contrast, fellow captive “Bean” maintained a high level of activity three hours after last seeing sunlight.  However, this only applied to the Pure Titans. The Nine Titans, and those controlled by Zeke Yeager’s and the Founding Titan, did not require sunlight to move.

Titans had incredible regenerative powers. The capacity varied from Titan to Titan and could regenerate lost body parts in seconds to minutes. However, if the nape gets severed with the head, then they would regenerate their lost heads.

Slicing a one-meter-long and ten-centimeter-wide area on their nape was one of the only sure-fire ways to kill them. The Titan’s central nervous system was there. In the Pure Titans, only the human spine got absorbed.

However, in the Nine Titans, the entire human body got absorbed. The Titan would perish if it did not have a functioning nervous system to control it. Titan corpses quickly dissolved to skeletal remains, then to nothing at all after death.

History Of The Titans

Ymir’s power came from a spine-like organism. While fleeing her masters, the Eldians, a slave named Ymir, discovered a large tree around 2,000 years ago. The tree had an entrance that led to a water-filled pit.

Ymir entered the tree, unaware of the water, and immediately fell into the pit. A spine-like entity attached itself to her back as she sank, transforming her into the first Titan. She returned to the Eldians with her newfound strength and served Fritz, becoming the mother of three of his daughters.

When Ymir died, Fritz ordered his daughters to eat Ymir to keep her power. It resulted in the division of Ymir’s power among her daughters. It later split into nine parts that became the nine titans.  Eldia used the Nine Titans to conquer Marley and establish the Eldian Empire.

The Nine Titans got divided up among the Eldian noble houses. The Founding Titan got used by the Fritz family to keep the other eight houses in check, all of whom were in a state of perpetual conflict. However, after 1,700 years, Karl Fritz inherited the Founding Titan and chose to leave the mainland’s wars.

The Great Titan War began while he was away. The chaos it caused allowed the Marleyans to rebel and take over the continent. The King and many Eldians fled to Paradis Island. He then built three Walls around his territory with the help of Colossus Titans. Marley would send undesirable citizens to Paradis Island as Pure Titans, doomed to roam the island in the following years.

Why Do Titans Spit The Humans That They Eat?

How Do Titans React To Pain?

The way Titans reacted to pain stimuli varied. Some Titans completely ignored severe injuries. Even when they had impalement through the heart, they would still attack nearby humans as if nothing had happened. Others would scream or writhe in pain. Humans endowed with Titan power did not feel pain even when their Titan forms got damaged.

The Attack on Titan anime has revealed a lot about Titans. The movie revolves around a boy who seeks revenge for his mother’s death. He swore to kill all the exiting titans when one Titan ate his mother. The fascinating thing is that the titans ate people despite not having a digestive tract. They ate humans not for survival but for the hope that they would eat a titan shifter and gain the power to transform back to humans.