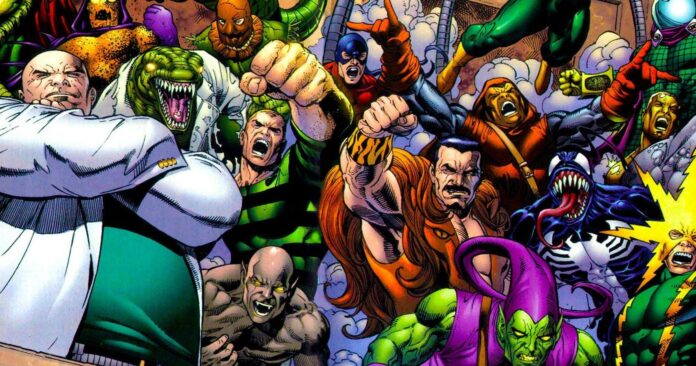 Some of the most powerful Marvel Villians include Molecule Man, Kang, Dr. Doom, Phoenix Force, Mephisto, Apocalypse, Galactus, and more.

If it weren’t for the supervillains, the superhero genre would not be nearly as exciting as it is. Marvel fans have seen a number of truly iconic villains over the years.

With so many villains in the Marvel universe, it is so difficult to identify the most powerful one but there are certainly some villains who are eviler than the others.

So, here comes the list of the 10 strongest and most powerful villains in the Marvel universe on the basis of their power, intelligence, the taste of vengeance, and more.

Appeared first in Fantastic Four #20 in 1963, Molecule Man’s power revolved around molecules. He had the power to change any molecule into any other molecule.

He could turn a street into a lake of acid and a tree into a skyscraper. He could disassemble any villain or hero into any molecule just by thinking about it.

Molecule Man was the only one who managed to slow down the Beyonder as well.

Kang, one of the most intelligent supervillains, can control most forms of technology. What really makes Kang most dangerous is his ability to time travel.

Because of his extensive knowledge of past events, he was able to fight against Avengers and other villains of the Marvel universe.

His highly advanced armor not only resists radiation but also grants him energy and force-field projection. Without his time travel ability, Kang wouldn’t be so scariest but with it, he was definitely the greatest villain in the Marvel universe.

Known as the ‘Marvel Girl’ Phoenix is an ultimate power that was born of the void between the states. She is the immutable and immortal manifestation of the universal force of life and passion.

She‘s able to control molecules and atoms at her will. Wielding telepathic and telekinetic psychic power, Phoenix force is one of the deadliest characters of the Marvel universe.

Doctor Doom may not be the most powerful villain of the Marvel universe but he’s definitely one of the smartest. A brilliant scientist, a practitioner of magic, he has an excellent knowledge of weapons and can make anything he wants.

He wears rocket boots, his tools and weapons are all high-tech, making him a threat to Dr. strange. He’s genius and indestructible; his ego is probably his only weakness.

With the help of his intelligence and magic combined, he has taken down the heroes and villains of all planets.

One of the scariest and coolest looking demons, Mephisto, is the leader of hell in the Marvel universe.

He resides in the underworld and controls an army of demons that could destroy the earth within a few moments.

Mephisto has both super speed and super strength, he can manipulate time and memory, through negotiations, he could take the soul of his opponents.

He becomes more powerful with every soul he takes. He’s nearly unstoppable and the Avengers were lucky to ever defeat him.

Born with blue lips, grey lips, a receding ponytail, a metal body that weighs over 300 pounds in Egypt, is one of the scariest villains of the Marvel universe.

Being the oldest mutant on Earth, he’s not only immortal but also can alter his body, strength, move things with his mind, and can teleport himself anywhere.

Apocalypse is also a super-genius and can alter other humans and mutants. In other words, he’s X-Men’s worst nightmare.

Introduced in the Fantastic Four, Galactus, in a true sense is neither God nor Alien, but a bit of both. Galactus has been around since the Big Bang, it is believed he was created by it.  Galactus is immortal, if he dies he comes back to life.

Not only that, he has enough power to bring other creatures back to life. He’s immune to poisons, diseases, and impacts. Some say that Galactus is the most intelligent villain of the Marvel universe.

With his everlasting stamina and strength, he can convert any matter into any other kind. We all should stay as far as possible from this scariest villain of the Marvel universe.

Cyttorak is the most mystical entity with vast magical powers. He is described as both demon and God with limitless power. He is so powerful that even Galactus looks useless in comparison since he was able to imprison Galactus.

He’s even capable of creating life. He created a whole race of elves whose sole purpose was to worship him. Dormammu and Dr. Strange’s source of magic is Cyttorak himself.

First appearing as the main antagonist of Star Wars of 1984, Beyonder is near-omniscient, near-omnipotent, and near-omnipresent.

He was the villain responsible for gathering the greatest villains and heroes of all time to fight a battle for his amusement. Able to destroy, reshape, and resurrect beings, he was even able to defeat death itself.

With so much power, Beyonder is definitely the most powerful Marvel villain ever created.

Also known as the ‘Mad Titan’ Thanos is one of the strongest villains of the Marvel universe. The Guardian of Galaxy, X-Men, The Avengers, The Fantastic Four — he has fought almost all heroes.

He was extremely strong and with his mind control, he was even able to control the Hulk. His strength, speed, durability, and stamina are all superior to any other villain of the Marvel universe.

Thanos’s powers include but are not limited to telepathy, manipulation, telekinesis, and time traveler.

These were some of the most powerful supervillains of the Marvel universe. They are included in the list on the basis of their superpowers, abilities, and strength.

Though we have not ranked them in any order.

Feel free to comment which supervillain according to you is the most powerful one from the Marvel universe that we may have missed. We’d love to include them in the future update of this list!

Jakehttps://talkradionews.com
Jake is a passionate entrepreneur and writer who likes to spend a large chunk of his time researching, reading and writing. He aims to keep web surfers engaged with the latest news and articles on a wide range of topics. When he's not writing, he's busy catching a tan on the beach in Florida.
Previous articleWhat Colors Make Purple?
Next articleHow Many Ounces Are in a Quart?

The Assistant Vs. Associate Professor Comparison