What Do Australians Think Of Americans? The Dynamism Of International Relations 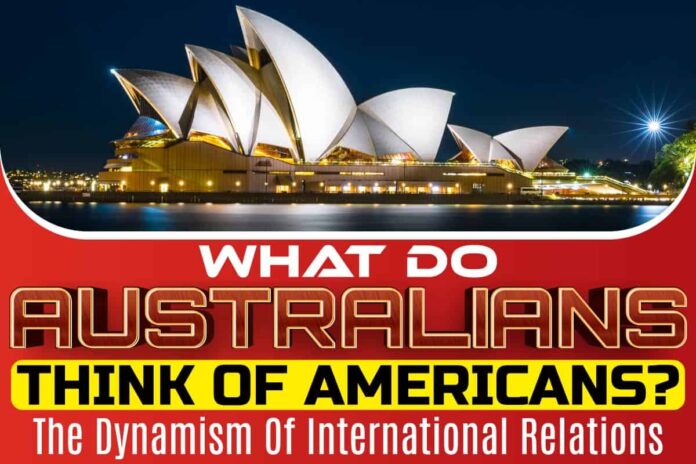 Australia and America are members of the Anglosphere, a community of democratic states that share cultural similarities. The two countries maintain a strong relationship and they have worked as partners in several forums.

This relationship began on July 4, 1918, during the battle of Hamel in World War 1 and has lasted for 103 years. On January 8, 1940, they officially established diplomatic relations.

Despite the long-standing relationship both countries share, many people are curious to know what Australians think of Americans.

What Do Australians think of Americans?

Australians respect Americans, especially because of their hard work and values. They also recognize the immense influence America wields as one of the world’s superpowers, and they welcome America’s support for democratic values around the world.

However, sometimes they are critical of America’s foreign policy decisions that undermine democracy, such as deposing democratically elected leaders worldwide.

America is Australia’s most important ally and trading partner, so Australians generally have a favorable view of Americans. But that doesn’t mean they’re always enthusiastic about everything America does.

Australians like Americans, and they enjoy chatting with them. (In fact, Australians have one of the highest numbers of American friends on Facebook: more than a quarter.)

Currently, Australia is in talks to finally include the Trans-Pacific Partnership (TPP) in their national agenda, as Australian Prime Minister Malcolm Turnbull has requested.

The TPP is a proposed trade bloc that attempts to encourage free trade throughout the Asia-Pacific region. If Australia were to be a part of it, it would push forward Australia’s stance on free trade across its region and create more business opportunities.

This action would, in turn, boost the “brotherhood” the Australians and Americans share.

Australia and America have in common a number of things. And all of them are evident for all to say. It’s not just something on paper. Let’s figure out what those things both countries have in common.

America is Australia’s most important ally and trading partner:

The two countries are bound together by shared democratic values, common interests, and history. Since the Second World War, the US has been Australia’s most important ally, so Australia fought beside America in Korea, Vietnam, Iraq, and Afghanistan.

Nowadays, the relationship is mostly about shared security concerns such as terrorism and cyber-security.

In 2014 the signing of the Australia-US Joint Declaration on Security Cooperation for the 21st Century in Canberra strengthened the alliance. The declaration commits both countries to closer cooperation on defense and security matters.

Americans are also the most important trading partner by a long way.

Australia’s exports to the US were worth $210 billion in 2014. That makes up more than a quarter of our total exports, making America more important for us than China, Japan, or Singapore.

In 2012 Australia exported nearly twice as much to the US as it did to China. Over the next two decades, America is likely to remain Australia’s largest export destination.

Australians are divided over America’s role in the world:

Australians generally believe that America has a positive role to play in the world. They support America’s leadership of international organizations like the United Nations and NATO, and they value US support for democratic values around the world.

However, they are dismayed when America supports leaders who disregard or trample upon their citizens’ rights, such as Mubarak in Egypt.

Australians are also concerned about America’s military spending. As a small country with limited resources, Australia is acutely aware of the dangers posed by militarism and rivalry between great powers.

Australians worry about protecting their sovereignty and democratic values:

Australia’s commitment to protecting its sovereignty and democratic values does not mean promoting American values or interests.

Most Australians believe that further Australian-American cooperation is more important than promoting American interests over theirs. Australians also believe that Australia should never fight alongside the US when it’s not their interest.

Americans are not popular in Australia.

Honesty, humility, and generosity are Australian values (the song Waltzing Matilda, for example, is about an Australian donating his last two shillings to a starving woman and her baby).

The stereotypical American is brash, boastful, and inflexible — which might explain why two-thirds of Australians consider Americans arrogant.

Australia’s biggest criticism of the US is that it’s too powerful for its good. It’s an attitude reflected in American literature — there are references to the “baleful giant” in Mark Twain’s Adventures of Huckleberry Finn.

America is a big influence on Australians because they both share the same values and interests, which is why they have allied with each other now for more than a half-century.

In addition, it was America that first gave Australia its distinctive characteristics through its pioneer settlers, values, and institutions – many of which still linger today. Americas’ openness to new ideas has resulted in huge cultural influences such as jazz music, rock ‘n roll, and hip hop.

In Australia, American culture is often romanticized, and some Australians express their admiration for the country through songs, movies, and TV shows. (For example, Australia’s most popular TV series is Glee.)

Australians have expectations of America:

Australians look to America to solve problems like global warming because America has the resources and technology to do something about it. They want American innovation and science for their good to save the planet for their children’s children.

Few Americans buy into this dream – rather, they believe that global warming is a hoax or at least a conspiracy against American interests.

Australians are obsessed with the American elections:

Every year in the lead-up to the presidential election, Australians tune into news reports from America.

They want to see how America votes and who will be president for the next four years. The internet and social media facilitate this interest by making it easier to access information from both sides of the political spectrum.

Australia’s interest in the US election reflects its support for American democratic values, shared interests, and an alliance forged during World War II.

But there’s another side to this obsession – a sometimes ambivalent relationship between country cousins who are fascinated by each other but at other times are uneasy about each other.

It seems Australians are not alone in this obsession — since the last election, the American media has taken more interest in Australia’s opinion of America than any other country.

The United States of America’s relationship with Australia is a unique one. You can describe it in many different ways, such as Broken, complicated, competitive, cooperative, or blunt.

However, you can say that this country has had a long-standing tie with its southern neighbor that dates back to before Europeans first set foot on Australian soil 400 years ago in 1770. This was when Captain Cook claimed the East Coast for Britain.

Many events have affected the relationship between the two countries, but it wasn’t until World War II that the bond started to form.

When America joined the fight in 1941, Australian and American troops fought side by side on many fronts in places like Greece, North Africa, Papua New Guinea, New Britain, and the Solomons.

A total of 416,000 Australian troops served as part of campaigns fought against Germany and Italy, while a further 71,000 served against Japan. Over 31,000 Australians gave their lives during these operations.

At this time, over 1 million Americans were stationed in Australia, making it one of our most strategically important allies in the war. It was also at this time that the relationship between the two nations began to grow.

Some of the most famous moments in Australia’s history are centered on America; (Anzacs landing at Gallipoli under British command, the young American Enola Gay dropping a nuclear bomb on Hiroshima, and Australian athlete Herb Elliot breaking the four-minute mile.)

These are just three of many examples of when both countries have been involved in a major historical event together;

Although relations were strong after World War II, it was during the Vietnam War that relations got rocky.

The United States and Australia held different opinions about the conflict, and so they didn’t support each other as much as they had previously.

Australian troops could have fought side-by-side with American troops in Vietnam, but the Australian prime minister, Robert Menzies, decided against sending them. Menzies did not want Australia to get involved in a war that he said: “was not our quarrel.”

American’s opinions of Australians at this time were mixed. While some thought they were cowardly for not fighting alongside them, others thought they were smart to stay out of the war as they believed it was unwinnable.

In recent times, the Australian and American relationship has been largely governed by trade and security concerns. The countries often have different opinions on political issues and don’t always agree with each other. However, they both do business with each other and understand that trade is more important than politics.

Jakehttps://talkradionews.com
Jake is a passionate entrepreneur and writer who likes to spend a large chunk of his time researching, reading and writing. He aims to keep web surfers engaged with the latest news and articles on a wide range of topics. When he's not writing, he's busy catching a tan on the beach in Florida.
Previous articleCheck Out Native American Physical Characteristics
Next articleWas Ulquiorra The Strongest Espada? Everything You Need To Know

7 Common Writing Mistakes Everyone Gets Wrong

What Is Safe Mode On Galaxy S3? – Understanding Galaxy S3