Are Social Democracy And Democratic Socialism The Same? The Answer Might Surprise You! 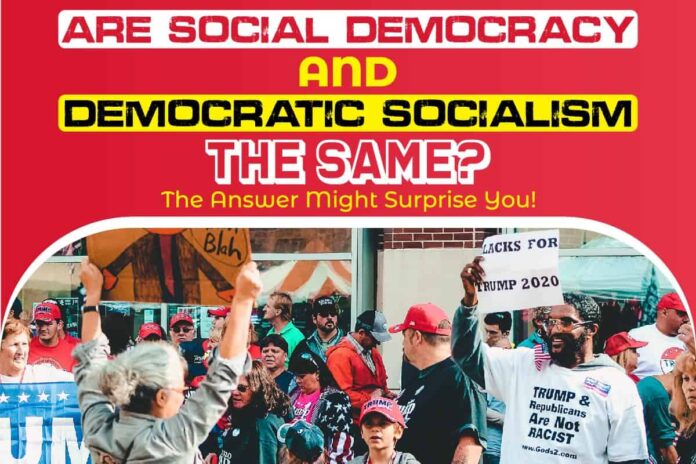 Are you struggling to understand the core concept of political philosophy? Want to know about the main idea behind democratic socialism and social democracy? Today is your lucky day!

Our team has a good amount of knowledge regarding different political philosophies that various politicians follow today. And as the topic of social democracy vs democratic socialism is getting pretty hot at the moment, we believe this is the right time to discuss it.

With that motivation, we have decided to describe all the things we know about these two political philosophies. And we hope that after going through the entire article, your idea regarding the two will be obvious, and you would be capable of differentiating one from the other.

As you know by now, social democracy is a political philosophy. And it does not only relate to philosophy. It also has ties attached to social and economic philosophy. But what does it actually mean? What is the main goal behind following this philosophy? Well, you will get to know all in this segment!

Let us first give you the basic idea of social democracy first. According to the academic definition, it is basically the act of advocating social and economic interventions to promote social justice within the mixed economy of the capitalist-oriented and liberal-democratic polity.

From the definition, there are a couple of things that we could like to point out. First, notice the economy that the act is targeted at. Only the mixed economy of liberal-democratic polity and the capitalist-oriented ones are in target. The other ones do not fall under social democracy.

Secondly, the act only focuses on the promotion of social justice by advocating economic and social interventions. It does not bother about any other factors. But keep these two factors in mind because they will easily help you understand the principle’s basics.

What Activities Do Social Democraticts Do?

When it comes to the activities that are done by the democratic for achieving the end goal, there are numerous of them. They will basically make a commitment to be the representative and the proper participation in democracy.

Additionally, the democrats that follow this philosophy will ensure that the income is properly redistributed and the economy is accurately monitored. And they will do all of these just for the public and general interest and social welfare.

So, where did the idea of social democracy begin? Well, to know that, we would have to dig a bit deeper. It basically started as a political ideology. And that idea advocated a peaceful and evolutionary transition to socialism from capitalism.

On that note, for the transition, the idealogy established plenty of political processes. And it did not bother one bit about the revolutionary approach in the case of transition associated with orthodox Marxism.

Other than that, when it comes to the origin in terms of place, it began in western Europe during the post-war era. In that era, the parties totally rejected the idea of the Stalinist economic and political model. And they sought out an alternative path that would simply look for the gains of the public.

In addition to that, the parties had a higher interest in embracing the newly mixed economic situation. That mixed economy generally revolved around the idea of predominance in terms of private property. And there was an exceptionally small amount of public that owned essential utilities and public services in that era.

Now, you know the idea, the activities, and the origin of the social democrats. But what do they actually seek? Well, it is pretty simple. The main idea tells us all about it.

Basically, the philosophy aims to humanize the idea of capitalism and create favorable conditions to lead the greater democratic, solidaristic, and egalitarian outcomes. It will do all that by cubing the inequality and minimizing the amount of oppression done to the underprivileged groups in society.

Wondering what will happen if the philosophy achieves its own goals? Well, the amount of poverty will be exceptionally low in society. Also, it will make the public services available for all of the public. The care for the elderly, education for the children, and health care for the workers will see an improvement.

As it usually bargains the collective gain, people usually make a strong connection with trade unions and labor movement when talking about social democracy. And the connection is wrong in any sense. The philosophy will extend the ability of decision-making and make sure that the economic condition is balanced.

Even if the term does sound familiar to Social Democracy, it is not similar. Yes, it is one of the political philosophies. But many things make it totally different. While social democracy merges the social and economic philosophies, democratic socialism will merge the socially-owned economy and political democracy.

However, to get a proper idea regarding the philosophy, you would also have to know the other factors. And we will discuss all of them in this segment. So, keep on reading.

The philosophy has a unique principle. It does support the socially-owned economy and the political democracy, but it only emphasizes other things. And among those, self-management of the workers, workplace democracy, and economic democracy are the most important ones.

Alongside that, this philosophy will emphasize all of these by keeping the market socialist economy and decentralized planned socialist economy in mind. It basically argues that the values of equality, freedom, and solidarity are totally inherently incompatible with capitalism.

This philosophy makes a broad label and is a movement that includes all the forms of market socialism, libertarian socialism, reformist socialism, and finally, revolutionary socialism. It will also include liberal socialism, ethical socialism, social democracy, and particular forms of utopian and state socialism.

So, from the core idea, we can take away a few of the essential things. Firstly, the things that it emphasizes. Secondly, the idea of rejecting the compatibility between capitalism and the things it focuses on. Like social democracy, these two points are pretty important and should be kept in mind.

What Activities Do Democratic Socialists Do?

Generally, all of the socialists aim to make a transition to socialism. But the thing is a bit different for the democratic socialists. All the activities that they are going to carry out will usually support reformist politics and revolutionary politics. And the activities will eventually establish socialism in the very end.

However, when it comes to the activities, the democratic socialists will mainly focus on the workplaces. They will consider the economic condition of different workplaces and fight for the freedom, solidarity, and equality of the workers working there.

The early democratic socialism mainly consisted of a mixture of numerous different socialists. It included other socialists and social democrats. And all of them were basically opposed to the development of authoritarian socialism in the Soviet Union.

But the Soviet Union was not the only region these socialists were opposed to. They were agitated with the development of authoritarian socialism that was happening on the other palaces of the world in the 20th century.

That being said, the origin can be traced all the way to the 19th century. In that era, the British Chartist movement and the utopian socialists had different goals. And that is where they collided. However, both of them did share one main idea. That was the essence of public ownership and democratic decision-making.

During the late 19th and early 20th centuries, this philosophy was highly influenced by social democracy. That is why most people tend to confuse one with the other. But as you can see, even the core ideas of both philosophies are different. And they are simply not the same thing.

Most of socialism has a long-term goal. However, some of the democratic socialists will also follow social democracy. And they will have a bit more concern regarding the curb of capitalism. But there is a catch. That concern basically connects to the progressive reforms.

In the end, those democratic socialists will make efforts to humanize all the forms of politics one day. But there are other democratic socialists present as well. They will hold onto the idea of economic interventionism and the policies that are similar to that. And all of the ideas will end up with reform.

Additionally, the democratic socialists will work to suppress the economic contradictions of capitalism and address the social inequalities in society. And they will believe that most of the issues can only be resolved if the capitalist mode of production in different workplaces is replaced with the socialist model.

Jakehttps://talkradionews.com
Jake is a passionate entrepreneur and writer who likes to spend a large chunk of his time researching, reading and writing. He aims to keep web surfers engaged with the latest news and articles on a wide range of topics. When he's not writing, he's busy catching a tan on the beach in Florida.
Previous articleWhat Color Does Red And Orange Make? Color Mixing Guide
Next articleHow Long Does Rabies Vaccine Last? What You Should Know About Taking Rabies Vaccines

Why Should You Rotate Food When Thawing It?

Getting Started with Guitar