Liberal Vs. Libertarian: Understanding The Difference 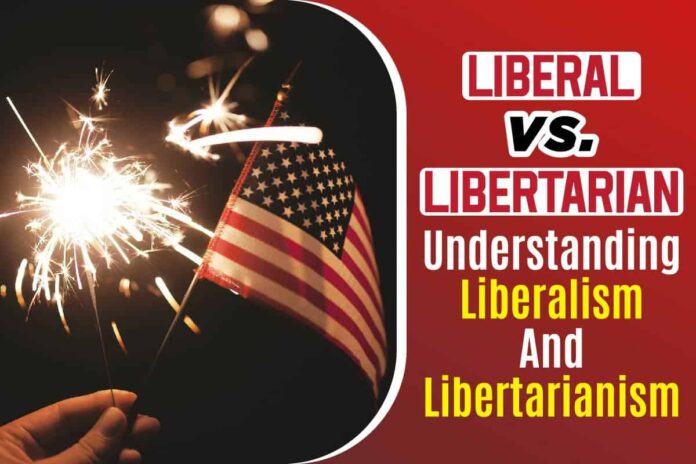 The United States is a multicultural nation. It’s made up of people from various ethnicities.

It has whites, blacks, Indians, and many more. The different groups are constantly pushing for ideologies that will be considerate of their interests.

So, take a look at the United States political spectrum. You’ll notice there are several political ideologies.

The various ideologies are tied to particular groups. At the extreme right is communism and on the far left is fascism.

Liberal and Libertarian ideologies are quite similar. The two ideologies lie somewhere in the middle of the political continuum. They do have various similarities.

This has made many think of them as interchangeable and somehow synonymous. However, they have differences that can’t be assumed and will be highlighted in this article.

Both Liberals and Libertarians are in for personal and economic freedoms. At times they oppose the involvement of the government in the two areas.

The two philosophies push for personal freedom. However, the liberals favor the involvement of the government in the attainment of freedom.

Here is a comparison between liberal and libertarians;

This ideology is in for individual liberty. To them, this kind of liberty is the most important goal. It further emphasizes equal access to opportunities and individual rights.

However, the liberals believe the government is an essential tool for achieving this. To them, it’s the role of the government to protect the rights of its citizens.

This is the most pushed for. Social liberalism claims it’s the government’s role in promoting its citizens’ freedom.

To them, it’s real freedom when people are offered the following: education, great health care and are free from poverty.

Freedom stems up from the government that guarantees the right to health care, a living wage, and finally, education.

In addition to the mentioned fundamental rights, the government is expected to pass laws that support better living.

This includes laws that are against pollution, discrimination in employment, and many more. The people’s welfare should be looked into.

The government can cater to this if need be. Support for all these should be sourced from the progressive taxation system.

In this ideology, individual liberty is achieved when the economic rules are lessened. It holds that freedom from coercion is the source of real freedom.

According to this ideology, state intervention in the economy restricts individuals’ economic freedom.

It’s also in support of the laissez-faire type of economic policy. This calls for little economic involvement and reasonable taxation.

The government should not tax more than what is needed to maintain peace, security, property rights, and individual liberty.

The phrase libertarian is derived from the word liberty. You must have an idea of what liberty means.

You’ll get a clearer picture and definition of what it is after understanding Libertarianism.

A libertarian believes that liberty is the most important value. To them, liberty has the freedom to make your own life choices.

It means the decisions about your body and properties are dependent on you. However, in your quest for liberty, abstain from forcefully interfering with other people’s liberty.

They are expected to not interfere with your liberty too. Libertarians are both extremely unique and weird in a way.

They believe in the let’s live life motto. They are almost dead if the government involves itself in the decisions of the citizens.

They have very little love for the government. Because of this, they are constantly referred to as supporters of anarchism.

The libertarians are for smaller governments, with little taxation and bureaucracy. At the same time, they call for greater individual freedom. Libertarian is divided into two types:

According to this philosophy, individuals’ liberty should be built from moral grounds. It would be best if you were keen on your morals.

The various actions done by an individual do form the basis of any moral judgment. It argues that only society can offer economic and political liberty.

Therefore individuals should be respectful to all societal structures. To them, liberty has extreme powers.

It can help an individual to realize a greater and efficient economy. In addition, it generates better benefits. This makes this philosophy best for enhancing and promoting social welfare.

It states that individual owners are the absolute owners of their destinies. You solely make decisions in regards to your finances and personal life.

However, it would be best if you never infringed on other’s rights. They are expected to do the same too.

It’s against attack, physical force, or threats against another individual or his properties. You can only pull these up when defending yourself.

Right Libertarianism calls for the need for a small government to perform certain roles. The government is only to offer protection to individuals.

It ensures that individual rights are not violated in any form. The government is to prosecute anyone who initiates unlawful force against others.

Differences Between Liberalism And Libertarianism

In the early years, the liberals and libertarians stood for the same thing. Their values and ideals were quite uniform, and they did love each other.

However, their ideologies have been changing over the years. Today there are several notable differences between the two philosophies. Here is a major difference.

Today the liberals are in for bigger governments. They believe the government is the best tool that can help individuals achieve liberty.

They want to secure individual freedom through the government. It’s the Marxists that interfered with their original philosophy.

They made the liberals believe that justice can only be achieved with the help of the government. This means increased taxation and stringent rules and regulations.

Taxation will help the government to raise funds that will be used to better education and health care. In as much as liberals call for lower taxation, it won’t be probable in the long run.

They want the least intervention from the government. They believe that individual freedom is innately generated.

The various structures of society should be respected to maintain liberty. All that individuals need to do is be respectful of each other’s space.

The libertarians believe in private initiatives when it comes to solving personal issues.

This philosophy has become widespread in recent years. It’s used in almost all continents with it being so popular in American and Europe. Populism is also widely used in Asia and Africa.

The people party is the party that sells this ideology in the United States of America. This philosophy is known to have a long political history in America.

It’s much more popular in their culture compared to Europe. It’s a strategic approach in politics. The ideology aims at separating society into two distinctive groups.

The opposition is between the people who are regarded to be pure against the corrupt elite. It pushes that it intends to protect the interest of the people against the elite and corrupt individuals.

The populist parties are associated with very charismatic leaders. The leaders behind the parties tend to have certain stylistic aspects, like being bad-mannered. They do value expression and make direct verbal attacks on their opponents.

Is Populism Good Or Bad?

You will get different responses depending on who you ask.  A supporter of the philosophy will give you an absolute yes answer and reasons why.

The haters or those against the philosophy will certainly say no, with reasons too.  However, populism has acquired a lot of negative associations in various regions and countries.

This ideology brings about divisive politics. It thus erodes the trends that liberal democracy has set, like minority rights and the separation of power.

It is derived from the Latin word “Conservare,” which means to retain. This political philosophy focuses on promoting and retaining all traditional social institutions. It has several modern variations.

Since the 1950s, the Republican Party ideologies have been greatly dependent on this philosophy.

From the above, it’s true that liberalism mainly focuses on equality and liberty. On the other hand, Libertarianism is for smaller governments with an emphasis on liberty and freedom.

The Liberal and Libertarian ideologies have great influences on United States policy debates. Debates are mostly concerned about the involvement of the government in social behavior and the economy.

The ideologies have a very strong and unique correlation. However, Americans do hold various opinions. The opinions do not always fit on the simple left to right continuum. The reason being, they are too complex.

Jakehttps://talkradionews.com
Jake is a passionate entrepreneur and writer who likes to spend a large chunk of his time researching, reading and writing. He aims to keep web surfers engaged with the latest news and articles on a wide range of topics. When he's not writing, he's busy catching a tan on the beach in Florida.
Previous articleHow Long Does It Take To Become A Police Officer? Check It Out
Next articleWhy Is Missouri Called The ‘Show Me’ State? Here’s Why

A Simple Guide On How To Build A Freestanding Wardrobe Closet

When Does Naruto Meets His Mom- The Thank You Episode?