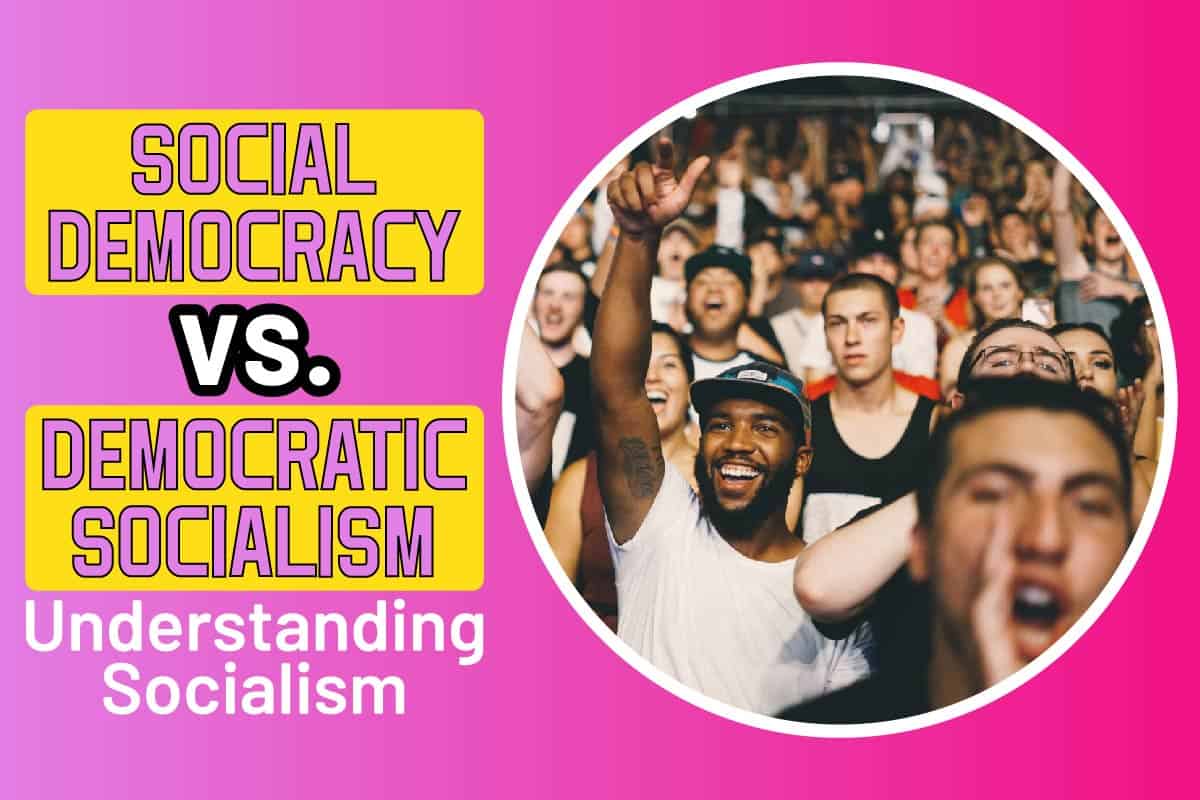 Socialism is a wide philosophy, and there are various types of SocialismSocialism. The types include several social and economic systems.

They are further characterized by democratic control and social ownership. Socialism is the system where every member of the society has an equal share of exchange of resources, production, and distribution.

This philosophy calls for a cooperative system. Each member of the society owns a share of the communal resources.

The rules in the socialistic system are that each person contributes and receives according to his ability.

Therefore the individuals in countries that have adopted this philosophy tend to work very hard.

The major areas where these resources are channeled are military, health education, etc. This article will be highlighting all the information on social democracy and democratic SocialismSocialism.

There are many types of SocialismSocialism around the world. However, their ideologies and how they are incorporated into the social structure differ.

In addition, they do emphasize the different and diverse aspects of social democracy.

What Is Social Democracy?

Social democracy has the willingness to use market forces. In a social democracy, the government can privatize some of the state-owned industries.

The high profits from the privatized industries are distributed using the tax system. It’s similar to the right-wing social parties like the labor party under the leadership of Tony Blair.

It did not renationalize the major privatized industries. However, it did put a windfall tax on any company which got high profits.

Social democracy was a peaceful transition from capitalism ideology to SocialismSocialism.

It was evolutionary and not revolutionary. It advocated for the use of already established political processes.

Social democracy has better intend. It seeks to humanize capitalism. Through this, it creates better conditions that will lead to greater egalitarian outcomes. Here are some of the characteristics of social democracy.

The great thing about social democracy is that the government is not run by the few rich. The citizens spend little money on public services like health and education.

Social democracy can lead to tax burdens. Private companies are taxed highly in a bid to give back to society.

Higher taxes mean higher risks, and the businesses need to earn higher profits to stay at par. However, it’s the government and society that control pricing.

Therefore it becomes hard for these industries to get profits. This, in turn, discourages innovation.

The governments offer housing, medication, and even education. However, the fact is that when people don’t need to work, they won’t work. Therefore the government will be forced to spend a lot on this quest.

What Is Democratic Socialism?

This philosophy is similar to the socialist parties of the western part of Europe. In this type of SocialismSocialism, the state doesn’t have all power.

It calls for a mixed economy whereby the state controls key industries such as oil, electricity, and gas.

The elected government manages the major factors of production. They are then distributed amongst people through centralized planning.

The private industries have the freedom to operate the remaining part of the economy. The tax system used to redistribute wealth from the rich to the poor is progressive.

The provision of a welfare state actualizes it. In this system, the government takes about 50% of the GDP.

However, they tend to have thriving markets, which leads to better living standards.

The democratic socialists argue that capitalism is inhumane. It’s not compatible with and can’t support the values of equality, freedom, and solidarity. They say that these ideals can only be achieved through a socialist society.

A huge gap between rich and the poor brings rice in other bad vices. There is increased hatred, corruption, and stealing. This welfare helps control such issues.

The Strength And Weaknesses Of Democratic Socialism

It pushes to empower every individual at the workplace, home, and economy. The democratic SocialismSocialism also pushes for equality in both gender and cultural settings.

This ideology does not focus on profits or the attitude of offering rewards to those who can survive.

It aims to create a humane society. In such a society, everyone has the chance to share a voice.  Here are some of the strengths of Democratic Socialism.

1. It Creates a More Efficient Economy

The structures of democratic SocialismSocialism are great. Its economic design does not push for sell of unneeded goods and services to the people.

This is advantageous to the manufacturers. They do spend little money on marketing.

The other amount is directed to production, innovation, and growth of wage.  However, people still get essential commodities without constant messaging and advertisement.

2. Creates Income Equality in the Society

Today, the income gap has been growing bigger for almost two generations. In the 1980’s the percentage of children who earned more than their parents was fifty.

Back in 1940, ninety-two percent of children were earning much more than their parents.

However, under democratic SocialismSocialism, the gap will not be removed. It will be greatly reduced, though.

3. Eliminates the Issue of Price Fixing

In this system, the government controls and monitors most of the organizations that offer goods and services.

Mostly the prices do rise because of market demands. Monopolistic companies can also control the prices.

The great thing is such factors are not present in democratic SocialismSocialism. Society has the freedom to control the pricing and regulations.

It allows for equal access to items. No structure gives the supplier powers to alter pricing even if there is a high demand for the products they supply.

In Democratic Socialism, there is nothing like haves and have not. All are equals. This system calls for communal ownership of almost everything.

The companies that have not been nationalized are used for the public good. In addition, the people can freely elect leaders.

They vote without the fear of any form of political reprisal. The good thing is the wealth, and cultural differences are reduced. This is because everyone is working toward achieving a common goal.

In this system, people are directly placed in jobs that match their specific skills. The production in this government is need-based. It does not focus on new inventions and opportunities.

This tends to limit innovation since there’s little to no competition with the government. States under democratic SocialismSocialism tends to lag in terms of innovation.

The government tries to identify the rightful eligible before giving out specific benefits. The applicants are expected to fill the paperwork and prove their skills.

The goal is to offer equal services and job opportunities to its people. However, more bureaucracy is created. It takes much time for the services to reach those who need them.

All economic growth is depended on the balance between domestic and foreign trade. With reduced innovation, the manufacturing industry stagnates too. It also leads to fewer international opportunities.

This forces the government to start important extra items to cater to the public. Without innovation, repairs become difficult to do.

The government is forced to import new parts and skills to do the fixing. It ends up spending much on things it could have avoided earlier.

Socialism is a great system. It does rely on the efforts of all society members. They come together to manipulate the various factors of production.

The returns are shared equally among the people. The greatest advantage is that no individual works much more than the other.

Those who don’t have jobs are also provided for.  However, since the government controls almost all aspects of the economy, it can easily abuse its authority.