What Type Of Government Does China Have? Governance In China 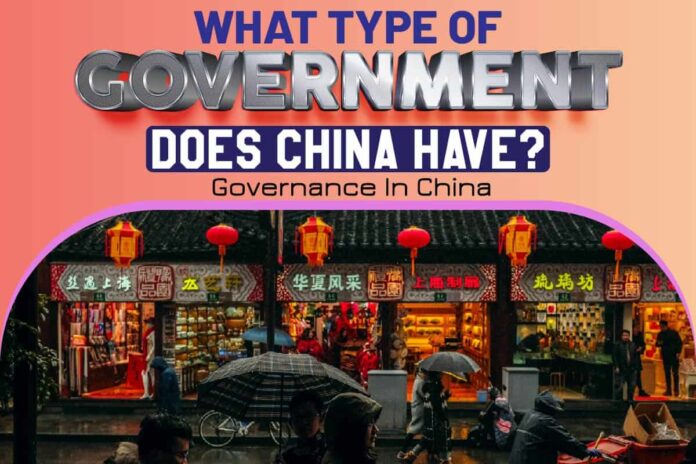 The People’s Republic of China, commonly known as China, is a country in East Asia. China is the world’s most populated country, with an estimate of over 1.4 billion people.

China has 23 provinces and borders fourteen countries. The political scenes in China have changed severally over the years.

Today, the country has a relatively sound political system. It has proved to be efficient, feasible, and has vitality.

The government has played a vital role in the development of china. This has made many westerners interested in the Chinese government.

They want to know more about their political structure and government type.

What Type of Government Does China Have?

China’s government is a one-party communist dictatorship. The Party holding the powers is the Communist Party of China.

The Party has held power since 1949 and has approximately ninety million members. It came to power after defeating its bitter nationalist rivals in the civil war.

The Chinese government paints its system as being a multiparty democratic government. Accordingly, it has created positions of executive and legislature to be accountable for the Chinese people.

It’s a move to please the Chinese citizens and world observers. But, in reality, the government is not democratic.

It does not stem from the people but rather from the CPC. Therefore, any CPC leader is a leader of the country.

The Communist Party Of China

CPC was formed back in 1921. It was based on Marxist-Leninism principles. They defeated their bitter rivals, the nationalists, in 1949 and formed the government.

This Party has been in power since then.  It’s the ultimate source of authority in the country. Anyone who chooses membership in this Party has a guaranteed position in the government.

It’s a direct ticket to a political career. The Party has about 90 million supporters, which is 6% of the Chinese population.

The party’s functions are just like any other communists parties in the world. Selection of leaders and formulation of policies is made secretively by the few.

It happens every five years. During the meetups, policies are formulated, and the central committee of 370 members is chosen.

The general secretary of the CPC is Xi Jinping. He happens to be China’s president and the most powerful person in the republic of china.

Any successions in the government are done behind closed doors. Many believe that the CPC is made up of two factions.

The first one consists of children of influential leaders. The second one consists of those who hustled their way up to power. It includes people from the Communist Youth League.

However, some believe that CPC is complex and hard to understand. They think that within it are battles involving various allegiances and factions.

The Government Of China

The highest organ in terms of powers is the National People Congress. It meets every two weeks. In the meeting, they review and approve policies, budgets, laws, and personnel changes.

The initiatives are brought to the state council by the Party’s Politburo.

In addition to approval of personnel and policies, the NPC plays the role of the national legislature. As a result, it has pushed for the revision of some laws.

From the village, there’s the Township County, municipality, and province. Each level is responsible for overseeing all the functions carried out by the lower level.

At each level, there are two crucial leaders known as Party Secretary or Party chief. Their superiors elect them.

The mayor, governor, or magistrate is the head of the local government. He/she is elected to the position by the people. However, they do carry out various ceremonial duties and implement policies.

There’s no influential and legal opposition groups in china. The country is solely run by the CPP (Chinese Communist Party).

However, there are other small opposition parties, such known as democratic parties.

They do not have substantial roles. The democratic parties take part in the people’s consultative Conference. Mainly they endorse policies made by the CPP.

However, there have been moves to make China democratic. Right now, elections are only held at town and village levels.

The CPP is constantly emerging victorious and retains maximum control over all government appointments. The CPP wins elections by default.

Recently CPP has been pushing to enforce its powers further. It is doing this by suppressing political dissents. In addition, the Party is tirelessly working on improving the country’s economy.

It has also allowed public expression. The people can now spit out their grievances as long as they are not tied to an NGO or a group opposing them.

The current political concern in China is the rapidly growing gap between the rich and the poor. Corruption is another menace. It has become a thing in the government and institutions.

This is because power is unchallengeable. Therefore leaders steal knowing they can’t be ejected from their positions.

It’s true to say the support for CPP by the masses is so unclear. This is because there are no solid parties that can offer a challenge to the CPP.

Moreover, the candidates elected into office through other parties aren’t well organized to challenge the CPP party.

Role Of The Government And CPP To The Economy

The government, which is CPP, has played an essential role in the economy. Today China is ranked as the second-largest economy in the world after the USA. The great thing is it’s still growing bigger and better.

The government is explicitly responsible for managing and planning the national economy. The government was given this mandate by the constitution of 1982.

The constitution provides the state with the power to carry out national economic planning and budgeting.

The more significant part of the government was given roles to play in the economy. The government has more than one hundred ministries, commissions, administrators, etc.

The significant economic sector was supervised and directed by one of the ministries or more. This ensured proper financing and management of various industries.

Moreover, it led to massive development of initiatives and production of quantity and quality products.

This was a great move by the Chinese government.

They did not liberalize their economy like other communist states like Russia. This ensured steady economic growth.

The government’s aim was to use foreign capital for its benefits. These were long-term goals like upgrading their economic structure.

However, the socialist economy was not completely done with. The Chinese government was cautious of the capitalists’ influence.

They knew about the capabilities of the western powers. Western powers tend to be so exploitative. If not keen, they will take all your minerals and leave you in unexplainable debts.

It’s said that Africa is the largest consumer of Chinese products. However, the dependent relationship between Africa and China comes with some attached strings.

China knows that Africa still has enormous amounts of minerals. The Chinese government knows it can only get its hands on the minerals if it strengthens ties with the nations.

However, there is intense competition between China and western countries. China decided to offer vast amounts of development loans to African countries.

They finance and manage most projects in African countries hence rooting their influence. However, the reactions from African nations to China’s presence in Africa are quite different.

Some governments are overwhelmingly positive. They see China as their only way to economic development. However, others do criticize the Chinese government for being so exploitative.

The Chinese government is a one-party state. It has gained recognition among Chinese citizens because of its tremendous economic policies.

The government has also allowed freedom of expression as long as it’s not against them. Today China ranks as the world’s second economy.

This is because of their significant economic policies. It is open to each foreign investor. However, the government is being ridiculed for its biasness.

Elections are not conducted fairly, and other parties are being suppressed. In addition, there is massive corruption in the government branches. This has massively increased the gap between the rich and the poor.

Jakehttps://talkradionews.com
Jake is a passionate entrepreneur and writer who likes to spend a large chunk of his time researching, reading and writing. He aims to keep web surfers engaged with the latest news and articles on a wide range of topics. When he's not writing, he's busy catching a tan on the beach in Florida.
Previous articleSocial Democracy Vs. Democratic Socialism: Understanding Socialism
Next articleIs All Might American? Toshinori Yagi’s True Identity

Legal Envelope Sizes: All About Envelopes

Does USPS Print Labels? Here’s Your Guide To Shipping With USPS

What Does The American Flag With The Blue Stripe Mean? Check It Out