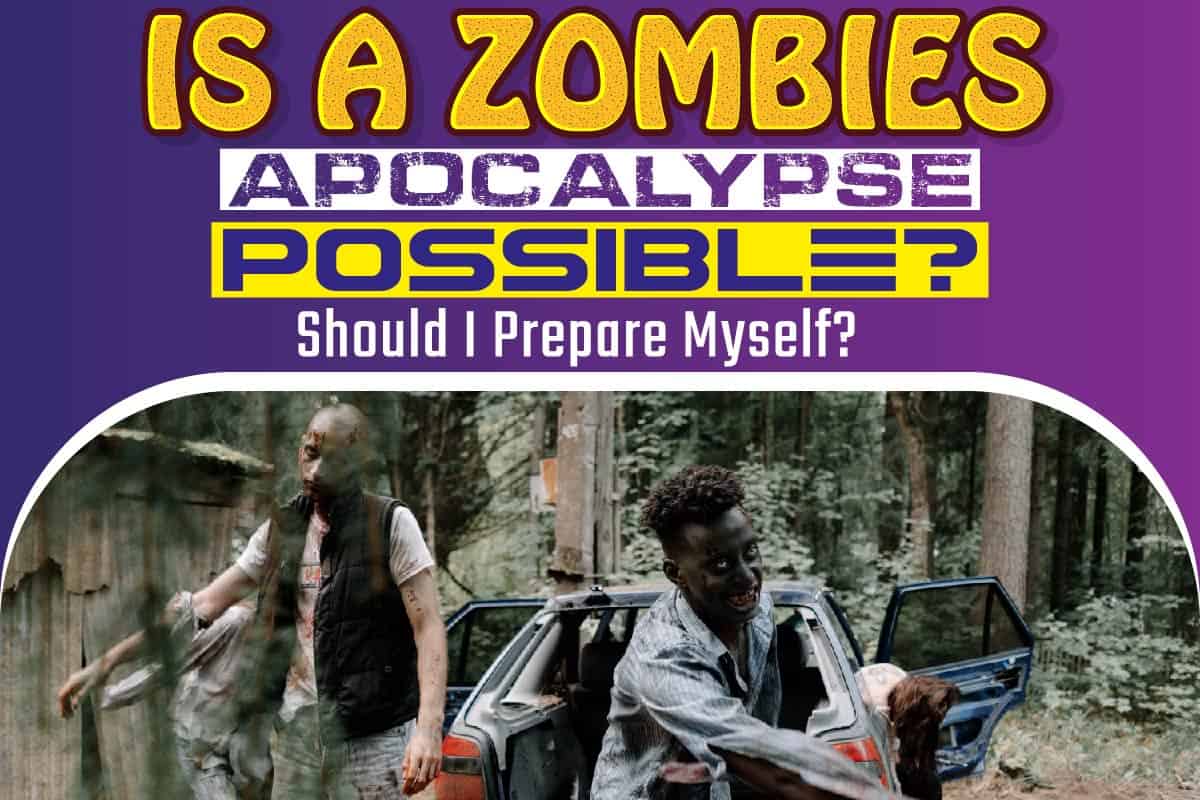 Thanks to the bulk inspiration of Hollywood movies, people now know what the zombie apocalypse actually is. People turn on each other, the dead becomes the living, and converts the other living beings into zombies; these are the typical scenarios of those movies.

That being said, due to the massive reach of those movies, people are wondering is zombies apocalypse possible or not. In fact, the topic is so common that most of the discussion threads are full of these types of questions. And that caught our attention.

We decided to do a bit of digging and wanted to know if the entire idea is really a fictional thing or is there any clear evidence of the apocalypse occurring or not. And what we have found is surely going to chill you to the bone.

What Is A Zombie Apocalypse?

The zombie apocalypse is now one of the greatest fears of humanity. As you might know by now, the main idea is that the dead would rise and start feeding on the living. And upon that, they will kill all of the livings and convert them into the dead. But these dead beings are not actually dead; they are the undead.

These dead beings go by different names in the movies. They are often called living corpses, the walking dead, the undead, or simply zombies. No matter what you decided to call them, they would rise from their graves and make the lives of the living into a living hell.

Upon digging a bit further, we found that the word zombie came to the English language in the 1800s. It was first mentioned on the papers by a poet named Robert Southey. He mentioned the term in his poem, which was called the History of Brazil.

According to the dictionary of Merriam-webster, the term comes from Haitian Creole or Louisiana Creole word “zonbi.” It is akin to the term Nzumbe, which means ghost. However, in Western Folklore, the word referred to a being that was more than a ghost.

After a while, the concept evolved from just ghosts to a person that died but came to life. But this concept deals with the person that had no senses or did not know what they were doing while being at that state. Basically, the person would enter a death-like state.

Nowadays, the word zombie is not just used to refer to the living dead. It is loosely used metaphorically. People might use the term to address an exceptionally slow person. Many might refer to a person using the word to state that they have little to no awareness about the surroundings.

Is There Any Possibility Of Zombie Apocalypse Occurring?

You might not believe us when we say that zombification does exist in nature! Yes, there are zombie-like being in the environment around. And the reason behind them exists is because of a parasite or evolved virus, which controls the brain. It makes the being lose complete control.

However, we have more than just statements that might seem vague to you. Here are some cases where zombification actually occurred:

Have you heard about a genus of fungi that have more than 200 species? Yes, we are talking about Ophiocordyceps. And 200 is just an estimated number; mycologists are still counting the number of species it has. Many of these species are dangerous because they are highly toxic to living animals.

Among all of those toxic species, there is one that has frightening capabilities. They target and infect different types of insects using their spores. And once they are infected, the parasite takes total control of the body. It can alter the entire behavior of the insect and control the mind.

One of the prominent examples of this would be the carpenter ants. The parasite makes these ants turn into zombies. It will control the ant and make it climb to an elevated position. After that, the ant will eventually die by remaining affixed.

But what is the reason behind taking the ant to an elevated position? Well, the higher position enables the fungus to strive and grow. And while it is on the elevated point, it will spread the spores efficiently, which will late infect the other insects around the area.

On that note, all of the insects it will infect later will do the same thing. They will climb to an elevated position and die. Eventually, the parasite can take out an entire army of ants.

Recently, the zoologists of Philippe made a tremendous discovery in the Ecuadorian Amazon. They found a species that was previously unknown to mankind. It is a species of Zatypota wasp, which holds the ability to manipulate spiders. But that is just the tip of the iceberg.

What will amaze you is that these wasps only target a group of spiders, called Eximius spider. These spiders are very social and prefer to live in groups. And the groups stay close to the other groups, which ensures that there is not that much of a gap or distance in between the spiders of the colony.

However, whenever the wasp attacks a member of the colony, they will exhibit bizarre behavior. It will make the spider leave the colony and make a cocoon-like web in a remote location. And these spiders will not make any contact with the rest of the colony throughout their entire lifespan.

Further research shows that inside the cocoons, Zatypota larvae were growing. These larvae are going to grow up, lay eggs on the abdomen of the spiders. And when the eggs hatch, more wasps are going to emerge. Eventually, all of the wasps will feed on the spider and take total control over the host.

In the year 2014, researchers have made a stunning discovery that involves plants and zombification. The research took place in Norwich, UK, where the researchers of the John Innes Center found out about a specific type of bacteria, which is called phytoplasma.

This bacteria holds the ability to convert plants into zombies. The bacteria, which insects will disseminate, will infect the plants that have yellow flowers. Upon being infected, these plants will grow out leaf-like extensions instead of blooming their flowers.

But why? What is the reason behind the bacteria making the plants grow out leaf-like branches? These extensions will attract more insects, which will eventually allow the bacteria to travel around and infect the other plants within the vicinity. However, this transformation does not make the plants die.

Instead of making the plants die, the bacteria will use the entire lifespan to increase their population. However, the plants will not grow any flowers after getting infected. The potential branches that were to bloom flowers will make the leaf-like extensions for the rest of the lifespan.

Researchers from the Center National de LA Recherche have made a discovery that stunned the whole world. Upon spending hours and hours on the dead organisms, they were able to bring them back to life. And the organisms that we are mainly talking about here are viruses.

The team first found out about a fascinating organism that was dead inside the Siberian frost. They estimated the virus to be about 30 thousand years old, and it is enormous in size. This old virus is named Pithvirus Sibericum.

But how giant is the virus? It is more significant than a usual virus but not large enough for a human to see them with the naked eye. However, there is another thing that makes this giant virus stand out other than just the size. It contains an enormous amount of genes.

On that note, due to the large size of the virus and its vast number of DNA, researchers speculate it can be dangerous for humans. But for that to happen, it needs to stick around for an extended amount of time. And as the virus has a cell, which is very hard to break open, it can take over the world quickly if it spreads.

Considering all of the dangers, the virus is now safely contained. However, the researchers speculate that the ice is hiding a lot of these types of viruses. And global warming can make them resurface.

In conclusion, to answer the question of is a zombies apocalypse possible, we must consider how zombification is present in nature in different forms and among different insects. Upon considering that, you will see that there is a chance of that happening.

However, there is nothing that we should worry about at this moment because if zombification in the case of humans does occur, it will take multiple eras or centuries to happen.