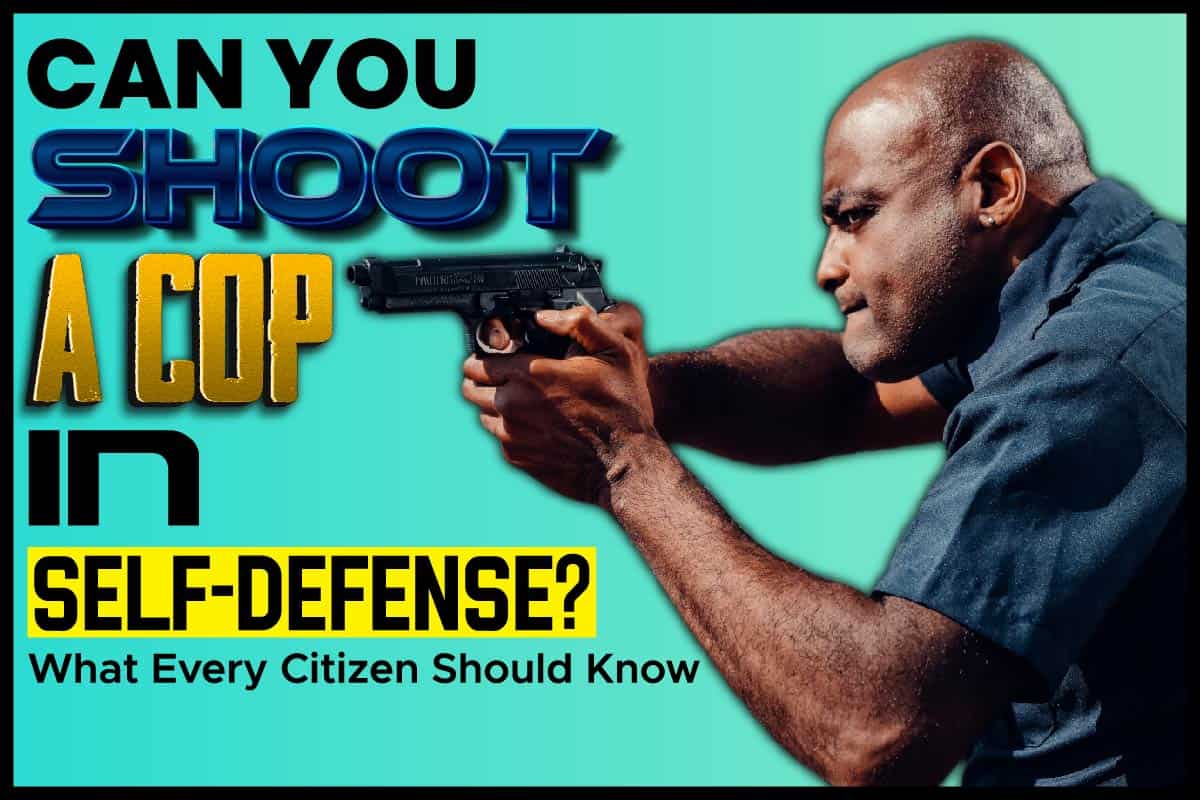 A cop’s primary duty is to protect lives and properties. And he or she has to perform that by enforcing the law that governs the state or city. But then, as law enforcers, people expect cops to discharge their duties within the confines of the law.

However, there have been a series of cases regarding police brutality and unlawful killings. One major incident that shocked the world and caused mass protest was the killing of George Floyd.

So, it is not surprising that people would want to know if they are within their rights to defend themselves from being harmed by cops.

Can you shoot a cop in self-defense?

The easy answer is. Yes, you can. But it isn’t that straightforward. That’s because the person you’re defending yourself against is a cop.

If a person is trying to kill you, you can shoot to defend yourself. But when it is a cop, let shooting be your last option. It may be difficult to weigh your options in a life and death situation. But, please, do so in this scenario.

Especially, If the life and death situation in question involves an officer of the law, take a brief moment to be sure you don’t have other options.

You need to tread carefully with cops because if you make it out of the situation alive (your chances are slim), there is a massive chance that you would be going to jail for murder.

This post contains useful information on this topic. Read on:

Are There Instances When People Shoot At Cops?

One of the most common instances of people shooting an officer of the law is during a no-knock raid. In many cases, even when the cop isn’t killed during the shooting, the shooter gets charged to court. Here are a few instances:

The Texan shot at officers during a no-knock raid at his house. According to his story, he thought his home was under attack by burglars.

It was 5 am, and he supposedly shot to protect himself. Unfortunately, a cop died, and three were injured from the shooting. Marvin has been in jail for over six years, awaiting trial for the killing.

Ray Rosa lived in a house with his cousin, a suspected Marijuana dealer. This no-knock raid was for Rosas’ cousin and not Ray Rosas himself. Ray Rosas ended up shooting (with a licensed weapon) at three officers (no one died) in the heat of the raid. He surrendered immediately; he knew his home invaders were cops.

He reiterated that he didn’t know the invaders were cops and that he shot to protect himself. Despite his claim, he was charged to court for capital murder and assault (aggravated) on an officer. He was acquitted a week later by a jury.

This Texan got charged to court. Like Marvin Guy, he said he assumed it was a burglar breaking into his house. So, he shot to defend himself and ended up killing a cop. He was acquitted of the shooting but served time for drug possession.

Maye said he shot to protect his daughter when the cops executed the no-knock raid. He killed a police officer and was on death row for ten years. He later got a plea deal, and the charge got reduced to manslaughter.

There are several other scenarios, and in more than half of them, the shooter ends up serving time in jail or gets charged to court.

What Is A No-Knock Raid?

A no-knock raid is one where officers don’t need to knock and announce their presence before entering a suspect’s house. It is legal in some states. The officer would require a no-knock warrant before they carry out the raid.

It is usually carried out when the officers suspect that announcing their presence would be harmful to them. Or that the suspects might attempt to destroy evidence.

Many judges require substantial proof that announcing the presence of the police would be a poor idea before they issue a no-knock warrant.

Yes. But it rarely happens. There are instances where police officers may get to a suspect’s home and realize that they may need to enter without knocking and announcing their presence. It is rare and only happens in extreme cases.

What Does It Mean To Knock And Announce?

As the name implies, the officers have to knock and announce their presence before entering a suspect’s home.

This rule is for the protection of the citizen’s rights. It Protects against unreasonable searches. The officers, even with a search warrant, must obey the knock and announce rule before entering.

Officers can enter the house forcefully if they don’t get a response, or are intentionally denied entry.

There is a rule that the cops must wait for a reasonable amount of time after announcing their presence before they go into a suspect’s house. This rule, like many rules for cops, is only in theory.

It is clear that with cops, it is best to avoid any form of confrontation. This avoidance isn’t because you don’t have rights. You do! It is because going off with a cop ends badly for the non-cop, frequently.

You have the right to defend yourself. True! But resisting arrest is a criminal offense. So, where do we draw the line? The best way to handle any situation (bullying or actual physical harm) with an officer is through the courts.

There are several cases of police brutality yearly. How many of those cases have the cops faced criminal charges? Well, only a few of them.

So, if you get in a situation where a police officer is trying to harm or bully you, avoid fighting back. Just work on leaving the scene alive and unharmed. Then you can get a lawyer.

When Do You Have Chances Of Winning A Self-Defense Case?

In murder or assault cases, the jury may acquit an individual to convince them that their actions were In self-defense. Here are a few facts to establish:

You were in inevitable danger:

You have to have been in a life-threatening situation. For example, the person had a weapon, and then was going to kill you. Or the person had skills or training that they could have used to harm you. The jury has to see that you were in a position of being harmed.

The person was hurting you or was in the process of harming you. Or, he or she threatened to harm you and showed signs that they might harm you.

You wanted to save yourself:

ou used force only because you wanted to avoid being brutally injured or killed.

How Do You Avoid Having To Defend Yourself Against A Cop?

Although, it is disturbing that you have to defend and protect yourself against the same people paid to protect you. It would make sense if you did it. There are good, law-abiding cops out there, but we can’t deny that a number of them aren’t upstanding in the ways that count.

People get shot at by cops for doing absolutely nothing wrong. People get bullied and harassed by officers who get away with their actions because they are somehow “covered” by the law.

You might not get out of defending yourself from a cop alive or unscathed. So, it is best to avoid any form of confrontation. Here are a few things to do when you meet a cop:

Please keep your hands in sight:

People have lost their lives because officers thought they were trying to pull out a weapon and shot at them.

Keep your hands in view at all times. If you have to pull out something from your pocket, e.g., your cell phone, do it slowly. And let the officer know what you’re trying to do.

This is important. Any sudden movement may be seen as a possible threat. So, keep your movements slow.

To obey, you have to listen. Pay close attention to what the police officers tell you to do and do it. If they want you to put your hands up, don’t hesitate in doing that.

If you’re with a weapon, don’t touch it unless they ask you to. Leave it where it is. If the officers ask you to submit it, ask them how they want you to bring it and where they want you to drop it. If they don’t give specifics, ask.

Remember, you’re fighting to stay alive. Don’t argue or try to provoke the cop. It might not end well.

No matter what you do, don’t try to run. You might not survive it. So, avoid trying to run from the arresting officer.

Until they ask you to, don’t walk away.

Other things to do include:

The answer to the question “can you shoot a cop in self-defense?” isn’t exactly straightforward. Because more often than not, situations where you have to defend yourself from a cop by shooting, don’t end well.

You could either get killed or serve time in prison. There are also a few scenarios where the shooter got released.

This post contains an overview of how you can protect yourself and how people who defend themselves against the police end up. If you shoot a cop in the name of self-defense, anything can happen to you in the law court. Keep that in mind.