What Does The American Flag With The Blue Stripe Mean? Check It Out 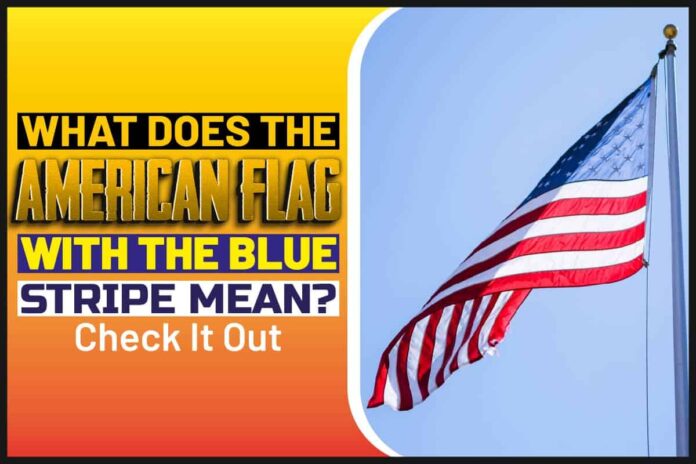 In the past years, protests over police brutality and racial profiling by police officers have been on the rise.

However, one thing that has consistently appeared during protests is the American flag that boasts the blue stripe.

But the flag, which is usually black and white with one blue stripe, has raised many eyebrows. People can’t seem to agree on what it signifies.

So, let’s find the mystery answer to this question.

What does the American flag with the blue stripe mean?

The American flag with the blue stripe represents support for law enforcement but has come to represent the opposition of racial justice over time.

This post contains useful information on this topic. Please read on:

The American flag with the blue stripe is known as the “Thin blue line” flag. The term “the thin blue” came before the flag.

The widely used term originated from the “Thin red line.” The Thin Line is a formation of a regiment of the British army in the 1854 Battle of Balaclava. In this battle, a Russian Cavalry charge had to face the unyielding Scottish highlanders.

This battle is one of the most talked-about battles of the Crimean war. The battle got heavy publicity, and it became a muse for many artists. You would find paintings of the battle in many art museums.

The term “Thin red line” is currently in use for firefighters. The term spread its reach into other professions—for example, A Thin white line of Bishops.

The first recorded use of the term “Thin blue line” was in Mel Anderson’s poem titled The Thin blue line. This poem, published in 1911, was about the US Army.

There is no recorded date of the first time the term got used for police officers. But there are notable moments when a dignitary or leader used it to refer to police officers.

For example, in 1922, Richard Enright used the phrase when he was a police commissioner. In the 50s, the term became rampant. It was even the name of a television show produced by the police department.

Bill Parker, Los Angeles police chief, explained that the term was the thin line between law and order and political and social anarchy.

In the 70s, the term moved from something used once to a regularly used term in the different police departments in the United States. It was common amongst police officers, police supporters, movies, books, and newspapers to talk about the police.

The term gained popularity and thrived for a long time, until people started to gradually distrusting the police, including what they stand for on the issues of racism.

Where Is The Flag With The Blue Stripe Displayed?

The Thin blue line flag is sometimes displayed alone or with the American flag. Over the years, it has gotten added to different items, like facemasks, clothing items, and different forms of design.

How Did The Thin Blue Line Flag Become So Controversial?

The things the flag signified began to change as time went on. Members of law enforcement say it stands for solidarity and pride in a risky and professionally demanding job. So, every time a police officer has the thin blue line flag on them, it signifies their acceptance and pride in their job. It also signifies that lives matter too.

When a police supporter has the thin blue line flag, it signifies that they recognize and respect the effort the police officers put into their work. It is simply in support of law enforcement.

In recent times, many citizens believe it has become a symbol of white supremacy. The controversy following the flag started years back.

But one of the most significant representations that backed up many people’s opinion of the flag and what it stands for was the fact that people flew it at the white supremacist rally in Charlottesville, Virginia. It was also on the facemasks of the police officers at the black lives matter protests in 2020.

The fact that law enforcement agents decided to “subtly” push a blue lives matter campaign (with the flag on their facemasks) when the black community was reliving years of racial injustice and police brutality because of the death of George Floyd was questionable.

It is not helping that extremist groups and conservative activists have adopted the flags as well. The authority of American law enforcement has been brought into question, and there is no going back from it. Black people want accountability, especially from the people who should protect them.

Many people have pointed out that a “simple” flag can cause so much division on what the entire police force represents. Then the call for police reform is a hundred percent necessary.

Can Civilians Use The American Flag With The Blue Stripe?

Yes, civilians can use the thin blue stripe. It is now easily accessible on different items and in different designs. Police supporters or different groups with different agendas can use it.

Andrew Jacob is the founder of the Thin Blue line USA. He was a white college student when he watched the protest of the brutal killings of Eric Garner, Tamir Rice, and Micheal Brown.

Jacob spotted the blue stripe on stickers and different items but never on a flag. He also says he attended the burial of an officer who was murdered on duty while in high school.

All these prompted him to start the thin blue line USA. He started it to support the United States law enforcement. The company solely focuses on selling pro-police t-shirts, flags, jewelry, neckwear, and so on.

Jacob has said that the items made and marketed by Thin Blue line USA have no connection to the promotion of racism, bigotry, bias, or Politics.

He has stated several times that the sole aim of the business is to support law enforcement and not for any political affiliations. So, they disassociated themselves from the Charlottesville campaign.

Stories have suggested that Jacob’s company was his white person’s racist response to the black lives matter protest. He vehemently denied this story. Although, he agrees that he may have seen the thin blue line during one of the many pro-police reactions after black people protested against police brutality at that time.

Jacob built the company at a time when the blue lives matter movement was resurfacing. Because frankly speaking, the amount of police murder had taken a plunge from what it was in the 70s and 80s.

Is The American Flag With The Blue Stripe In Line With The Flag Code Of The United States?

No, it isn’t in line with the United States flag code. Weeks ago, South Windsor’s town council voted for the flying of a “Thin blue line” flag in the center of town on a town government flagpole. This resolution got shut down.

The flag code of the United States is a federal law. The code mentions how citizens should treat and use the flag. The flag shouldn’t have anything attached or on it, whether a mark, letter sign, number, figure, drawing, or words. The flag must at all times be on display as it is without any altering.

It also states that you should not use the flag for any form of advertising or print on boxes, napkins, or temporary items. Neither should you embroider or imprint the flag on items like handkerchiefs or other similar items.

So, the code gives the protocol for the flag. But there are no consequences for violating the protocols. The first amendment to the constitution gives citizens the right to express themselves freely. In order words, a citizen of America can boldly deface the United States flag and get the backing of the Supreme Court.

The black lives matter movement started because of the ill-treatment of black people in America and worldwide. And as much as blue lives matter too (black people agree), black lives have been at the receiving end of brutality and unwarranted killings from the police for years.

The Thin blue line flag, which may have positive implications for the police, has created more division than impact to the citizens, especially the blacks. So, maybe the police need to review its significance.

This post is an overview of The American flag with a blue stripe, its significance, and its controversies.

Jakehttps://talkradionews.com
Jake is a passionate entrepreneur and writer who likes to spend a large chunk of his time researching, reading and writing. He aims to keep web surfers engaged with the latest news and articles on a wide range of topics. When he's not writing, he's busy catching a tan on the beach in Florida.
Previous articleHow Tall Is Naruto? Masashi Kishimoto’s Masterpiece
Next articleHacks on How to Write an Outstanding Essay

Does Starbucks Have Boba?