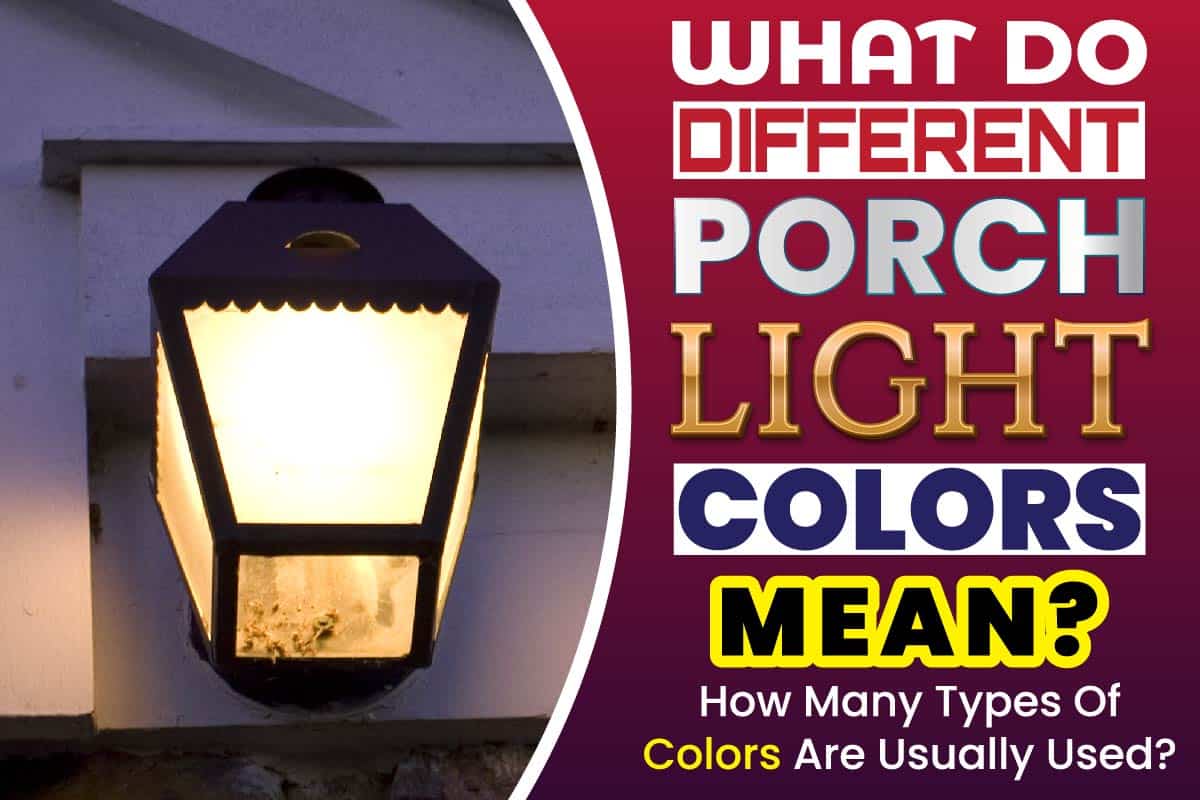 Porch lights are very popular in the USA. Most of the residents are going to install them simply to light up the porch area when the sun goes down. Moreover, there are plenty of different colors available.

And when the resident owners are asked to choose one, they usually go with the ones that convey a message. But what message do they want to give? And what do different porch light colors actually mean?

Well, that is what we are going to answer in this article. We will let you about the number of colors that are available. So, grab yourself a cup of coffee and get yourself in a comfortable position and keep on reading.

What Is A Porch Light? And How Many Colors Do They Come In?

First, let us describe what a porch light actually is. In simple words, it is a spotlight that will be generally be installed on the front door. It will do a proper job of lighting up the entire front door area. And after installing it, residents can easily see who is approaching the door through a peephole or the window.

However, there is more to it than just lighting up the front door area. They can act as a message conveyer to the person that is visiting the house. And the message is basically through the color of the light.

What Do The Colors Of Porch Light Mean?

As you know by now, the porch light comes in different colors. And apart from just lighting up the front door area and letting residents acknowledge who is on the front door, they can convey a specific message to the visitor. In this segment, we will discuss all of them.

The homeowners that are opting for a yellow or white porch light do not really plan to give any message to the visitor. Instead, they are using it just to get rid of the darkness that is on the front door area. And the sole purpose of this colored porch light is to let the person on the inside see who is on the outside knocking.

When there is a blue porch light installed on the front door, it basically indicates a few things. According to the Enlighted Landscape Lights, blue lights advocate awareness regarding Autism. And this advocating started in the year 2007 when the UN assembly officially announced on April 2nd as World Autism Day.

On that date, the world will focus on raising awareness regarding Autism. That is why it is marked as World Autism Day. After a few years, Autism Speaks started a campaign where they used the term “Light it up blue.” And from that point, blue light advocates autism awareness.

Starting from that, people started to install blue porch lights on the front door in April months. And the light can light up all through the month or just on April 2nd. And now that you know about this date, you can also turn on the blue light and show support.

Aside from just showing support for Autism, the blue light also has another meaning. It will basically indicate that the residents are showing respect to the police force. And this thing started in the year 2017. From that date, people would generally light up their porch with blue light to show respect.

Like the blue light, the green light also has a meaning. On November 11th of every year, the people living in the US will honor the veterans. It is marked as national veteran day. To show support, people will light up the porch area with a green light. And green goes exceptionally well with armies and their uniform.

However, the light might not be only turned on on November 11th. It can stay on for the rest of the month, even the rest of the year. And if the residents do light it up on the whole month of November, it basically states that they are showing respect and supporting the veterans.

There are other meanings as well. The green light might also mean that the homeowners are celebrating St. Patrick’s Day. But if that is the case, the light will be turned on during the month of March. It will stay lit for the entire day or just during St. Patrick’s Day.

Additionally, Enlighted Landscape Lights have also stated that the green light also spreads awareness regarding Lyme disease. In that case, the porch light will be green during the month of May. But do not forget that Light It Up Green is not a national thing; it is a worldwide thing.

Another color of porch light that is available is red in color. And this you will notice this light at different times of the year or throughout the entire year. Wondering what does it mean? Well, if it is during October, it basically acts to create a spooky vibe around the home.

But why would the homeowners want to create a spooky vibe around the outside of their homes? Well, it’s for Halloween. The red color really works like magic in terms of that. And usually, it is pretty easy to carry out tricks if the red porch light is a bit dimmed.

That being said, the light might be turned on during February as well. But it is not a décor for valentines day. February is also considered to be a month of American Heart. So, the red light would mean that the residents are advocating a healthy heart. Some might use them for just decorations.

Other than that, there is a myth related to red lights, which we would like to point out. People used to think that the homes that have red lights mean that there is no gun inside. However, this rumor was soon addressed by the WUSA9 in Washington DC. And they have finally ended the rumor that was circulating.

So, if you notice that a house with red lights, do not think that the owners have no gun in their house, instead, what they are basically doing is probably creating a spooky vibe for Halloween or advocating a healthy heart or just decorating the house with red.

The last shade of color that many of the porch lights will have is purple. Among all of the other colors, this one is considered the most important. But why? What hidden message does it have to portray?

After the issue was acknowledged, the Domestic Violence Task Force has started a campaign named Purple Light Nights. Ever since then, during October, people would install purple porch lights and show that they are spreading awareness regarding domestic violence.

However, it just does not spread awareness regarding it; it might also show that the residents might have lost one of their loved ones for this. And the light would also honor the ones that might have survived.

What Does Blinking Porch Light Mean?

Whenever we see a blinking porch light, we usually think that it needs nothing but a replacement. However, the case might not always be that. It can also act as an emergency signal. Someone from the inside might be trying to ask for help. They might be trying to get police, an ambulance, or a firefighter’s attention.

Usually, during a call for emergency, the vans drive exceptionally fast. So, they can miss the home that they are targeting. However, if someone from the inside is flashing the porch light, it will get to the driver’s attention, and the emergency forces will be able to stop at the exact spot.

That being said, during Halloween, a few people like to decorate the outside with flickering lights. That usually indicates that the homeowners are trying to a spooky vibe and not asking for help.

All in all, the main takeaway is that there are mainly four different porch light colors. They are blue, green, red, and purple. And each of them has a meaning. But many people might just use these colors just to decorate the house instead of trying to convey a message.