Can We Go to Heaven With Tattoos? 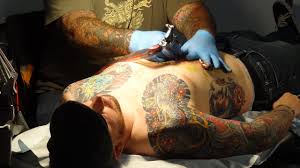 Tattoos have become extremely popular in today’s time. People consider getting tattoos to express their values, morals, or identity.

While tattoos are so popular among people, one of the most commonly asked questions is if Christians who have tattoos will go to Heaven? If you have a tattoo and believe in Jesus with your true heart, you can obviously go to Heaven.

Christianity doesn’t forbid you from going to Heaven if you have tattoos.

Does the Bible Forbid You From Going to Heaven Because You Have Tattoos?

Many Christians consider tattoos to be unholy. There is only one direct reference to tattoos in the Bible.

According to Leviticus 19:28: “You shall not make any cuts on your body for the dead or tattoo yourselves: I am the Lord” (ESV). Many Bible scholars believe that this is a direct reference to a mourning ritual that the pagans followed during the time of Moses.

Many Bible scholars consider tattooing to be a part of Pagan culture when they cut themselves to mourn the death of their loved ones. Pagan believed that when they hurt themselves physically, their pain will be increased.

Manipulating feelings were common in the ancient world. However, according to Bible scholars, God did not want His children to follow the path of pagans.

Other scholars translated the Hebrew meaning of tattoos, and it stands for cutting the skin. Therefore, if this was true, it would be forbidden. Similarly, piercing and makeup will also be sinful.

Many Bible scholars believe that Christians or Israelites should refrain from following the life like that of Pagan.

When one mourns death, they shouldn’t do what pagans do. Nonetheless, many scholars and pagans do not agree with their instruction.

What Does the Bible Say About Tattoos?

There are a lot of arguments about getting tattoos. Many believe that humans are built in the image of God. When one inks their body, they are altering the creation of God.

According to our Likeness, as per Genesis 1:26, Let Us make man in Our image.

According to this idea, our bodies are ‘pure,’ and we should let them be as God had designed them for us.

Inking or tattooing is a kind of violation of God’s creation, and in one way, we will be insulting what God had created.

Nonetheless, taking this saying seriously may also mean people should refrain from manicures and even haircuts.

When you get a tattoo, you tend to taint God’s creation. However, this may not be very reasonable. It is always advisable to implement logic to understand if it is effective or not.

When Christians consider something worldly, it means an unholy activity, and the contrast for worldliness is holiness. Although tattoos aren’t evil, many people consider these to be Godless elements.

Tattoos are modern-day trends, and they do not form an important place in the church. If you get tattoos, you’re not committing any crime or sin.

Are Tattoos Sinful For Christians?

Following the statement given in Leviticus 19:28, Christians believe that God instructs humans to refrain from getting tattoos. However, the main thing to understand is if getting a tattoo is a sin or a good thing to do if you’re a Christian.

According to 1 Corinthians 10:23, “Everything is permissible- but not everything is beneficial.” Tattoos may be allowed in Christianity, but there is a contradictory thought.

When you tattoo yourself, you indulge in cutting yourself due to the needle tattoo process.

Therefore, according to the instruction of God, you should refrain from committing any such act. Whether The Old Testament or The New Testament, it advises refraining from following the Pagan life.

If The Body as a Holy Temple, Will Getting Tattoos Violate it?

Many Christians argue that people should refrain from getting tattoos because our bodies are holy temples. It is our body where the Holy Spirit resides. The mention of the same is made in 1 Corinthians 6:19-20

“Or do you not know that your body is a temple of the Holy Spirit within you, whom you have from God? You are not your own, for you were bought with a price. So glorify God in your body.”

Although the context doesn’t stand for tattoos, it indicates sexual immorality. According to this verse, Christians should follow the path of morality. When you indulge in immoral sexual relationships, you disrespect your body as a temple.

According to this thinking, our body is a holy temple. When we mark it with tattoos, we move away from the Biblical teachings and don’t stay intact to our values. Nonetheless, many believers argue that if tattooing is a sin and piercings should also be a sin.

What Will Keep People From Going to Heaven if Not Tattoos?

The Bible teaches us to have faith in God to go to Heaven. Anyone who is not a believer will not get to go with Heaven. People should not rebel against God, be it with their motives, actions, or words.

Anyone who refuses to believe in the power of God tends to sin. People who get tattoos will still have the chance to go to Heaven if they repent their sins and reflect their belief in Christ.