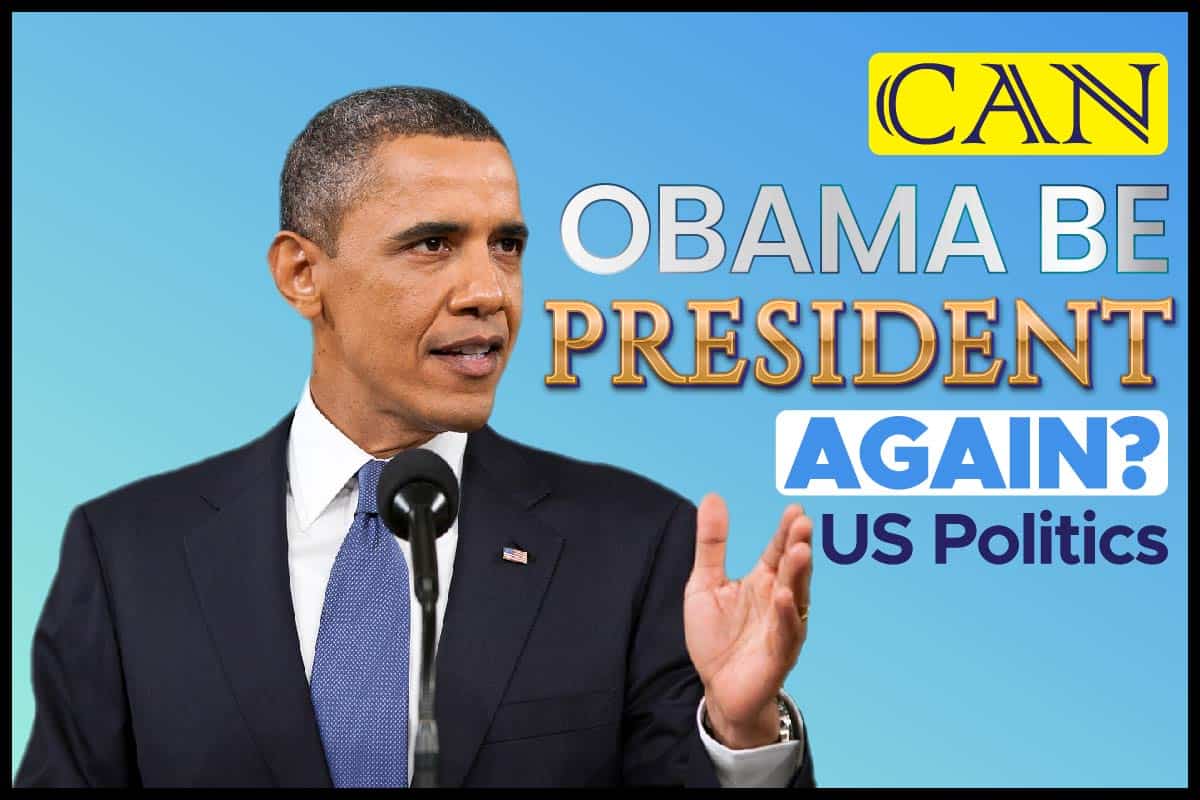 Obama’s involvement in Biden’s reign has sparked a lot of reactions. Many of Obama’s supporters are left wishing for his third return.

But how practical are their wishes? Is it possible for a former US president to run for office again?

The answer to these questions is not a direct one. Former President Trump has been quoted time and again speaking of a third term. If his words were true,

Can Obama be president again?

No, Obama cannot be president again. This is because he has already exhausted his two terms in the white house.

The 22nd constitution amendment limits a presidential term to two. The bill was passed in 1947 and ratified in 1951to become a law. It clearly states that a president can only serve for two terms.

Various publications suggest that Obama is eligible to run for a third term. It is common knowledge that a president is limited to two terms. But is there a way around this restriction?

The answer to this question dates back to the revolutionary war. The pioneers wanted to make the presidency office a lifetime appointment.

Although they didn’t go through with this plan, they avoided setting a limit to the president’s time in office.

The constitution also created the office of the Vice President.  The vice president is the president’s successor in an event the president can no longer serve. At that time, the second runners up in presidential elections were the VP.

George Washington As The Father Of The Two-term Presidency

George Washington was the first president of the United States of America. He ran twice and won the elections in a landslide twice.

However, Washington was not okay with serving for life. When he ran, he assured people that he wasn’t interested in serving a full four-year term. Instead, he would take two years to set everything straight and retire early.

Even though he was re-elected for the second term, he decided to retire at the end of his second term. His retirement established a tradition that would hold for years to come.

His successors continued the tradition and stepped down after the second term. All of those who tried for the third failed until the 20th century.

Franklin Roosevelt, The First President To Serve For Three Terms

Franklin Roosevelt was the first to break the tradition by being re-elected four times. At that time, a two-term presidency was not a law but rather a custom.

He succeeded at getting a third term because he was president at a time of unprecedented crisis. This was during the great depression and World War II.

He was further elected to a fourth term in 1944. However, most people were not happy with his reelection. Congress had been proposing term limit motions for over 140 years.

They continued to do so during Roosevelt’s time in office. Roosevelt, however, died in office 11 weeks after his fourth reelection.

In 1947, congress passed a 22nd amendment which limited the presidency to two four-year terms. The state ratified it in 1951 to become a law.

The amendment counts years served and not concurrent terms. This means that a president of two terms can never be eligible to run for office again.

This is why President Obama cannot be president again. It also has a provision for what happens if the vice president is forced to take over.

Can Trump Be President Again?

Trump’s eligibility for the presidency is also a huge political debate. Some of his supporters argue that his impeachment by the house does not disqualify him.

Ex-president Donald trump was impeached by the house but was not convicted by the senate.

Does that mean he can still run for office? If impeachment without removal from office nullifies a term, then he is perhaps an eligible candidate.

Section 4 of article 1 of the constitution sets forth a mechanism for the impeachment of federal officers.

These guidelines apply to the president as well. It states the ground of impeachment being bribery, treason, and other misdemeanors.

Section 3 of article 2 further dictates that the consequences of impeachment shall not extend further than one’s removal from office.

Therefore, if the president is impeached and removed, their removal is the only political consequence they face.

With that interpretation, Trump’s time in office is not nullified. Therefore, he can’t run for office as the 22nd amendment still binds him.

Do Vice Presidents Have Term Limits?

Vice presidents do not have term limits. Like members of congress, the constitution does not dictate the length of their term in office.

George Clinton was the vice president for both Thomas Jefferson and Madison. Similarly, John c Calhoun served under both Quincy Adams and Andrew Jackson.

How A President Can Serve More Than Two Terms

There is a rising discussion on how to get around the 22nd amendment. The constitution has some grey areas that can be used as a loophole.

As stated earlier, Vice presidents are the successor to their presidents. Originally the VP was the second runners up to the president.

Theoretically, one can serve for more than eight years as president. However, the 22nd amendment also states that a person can serve for ten years if he ascended to the vice president.

After stepping down from two full terms, the president can then serve as someone else’s Vice president. This automatically qualifies them to be the rightful successor to the seat.

If that president is unable to serve, they would then attain the office of the president. However, no former president has ever volunteered to be a vice president.

Barack Obama’s reign was a unique one. He was loved and despised by many alike. But, setting politics aside, Barack Obama has set a legacy that supersedes him.

One of Obama’s great legacies was becoming a black president. He will be remembered as the first black American president to ever serve in the white house.

His election was a historical sign of how far America has come. Despite its racial divisions and resentment, the majority of Americans voted for a colored candidate.

However, not everyone was happy with his election. One of his biggest opponents was Donald trump.

He believed that Barack Obama wasn’t American. According to TrumpTrump, that disqualified him from being an ideal president.

Barack Obama will also be remembered for the crisis he averted during his first year in office. He and his team saved America and the world from economic catastrophe.

Two months before assuming presidential duties, America suffered a serious economic crisis. His decisions were crucial in saving the country from the consequences.

Obama will also be remembered for his healthy presidency. He was determined to fix America’s health system. His Obamacare initiative greatly increased accessibility to healthcare.

Obama also managed to leave the white house without scandal. He is remembered as the cool and collected socialist. His ability to bridge differences among parties and allies was like a superpower.

The constitution accords ex-presidents several privileges for their service. Some of these benefits include pension, health insurance, protection, and staff.

Ex-presidents receive a taxable pension from the secretary of the treasury. This pension is usually equal to the salary of the cabinet secretary. Pension payments start immediately after the president leaves office.

They are also provided with transition payments. These payments are made for seven months. They are supposed to help them transition into civilian life.

The administrator of the general service also provides funding for staff and office expenses.

Former presidents are also given access to treatment. With sponsored medical insurance, they get medical treatment in military hospitals.

These, together with secret service protection, are some of the benefits enjoyed by former presidents.

All American presidents, including Obama, are restricted to serving two terms.  This is the case even though there is no mention of term limits in the original constitution.

President Washington is considered to be the pioneer of the trend. After serving two terms, he refused to run for reelection. It after that became an unwritten rule for presidents to stop at the second term.

It was until 1941 that Franklin Roosevelt became the first president to serve three terms. Then, in 1951, the 22nd amendment to the constitution was ratified. The amendment officially set the presidential term limit to two terms.