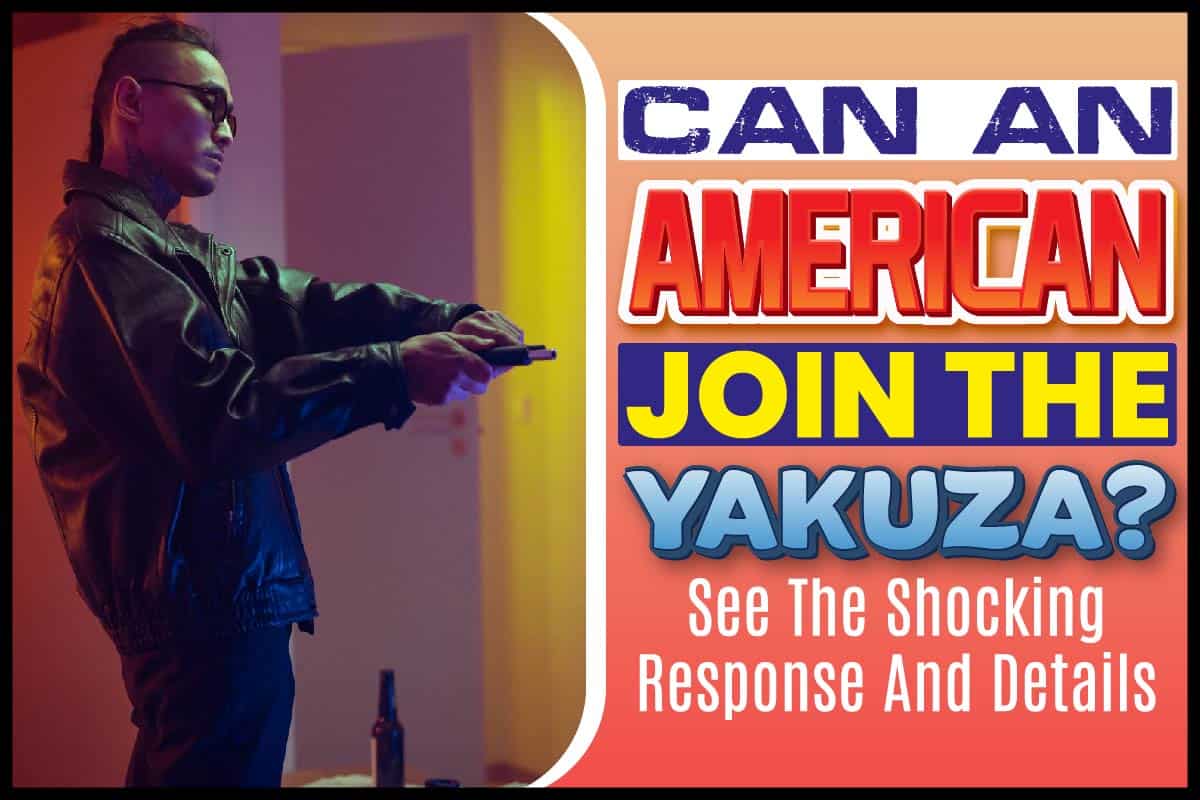 Japanese cities are widely known to be among the safest cities in the world. Osaka and Tokyo were part of the list in “Safe Cities Index 2019” in The Economist. However, it’s ironic that the country is a base for one of the world’s most organized criminal organizations known as the Yakuza.

The criminal organization has complex structures, rules, and codes of conduct that guide them. They have various rituals, and their activities are well-known.

Can an American join the yakuza?

Yes, you can join the Yakuza as an American. A small percentage of the Yakuza are not Japanese. But it may be a hard feat to achieve. That’s because the Yakuza have the traditional Japanese warrior spirit that sees the foreigner as a threat.

However, if you succeed, you’ll have to carry out criminal activities since it’s a criminal group.

Additionally, if you’re wary of school, it may be hard for you to get in, as you have to take an entrance exam. You have to pass the exam to become a member, especially in popular conglomerates.

The exam ensures that you have knowledge of their regulations and will not become a problem. You’ll also have to adhere strictly to their code of ethics, as breaking any rules will attract strict punishment.

This article explains all you need to understand the yakuza and their activities. That way, you’ll know what to expect if you join the group. Read up to get the information.

History And Meaning Of The Yakuza

The yakuza derives their name from a Japanese card game, “oicho-kabu,” similar to the Blackjack card game. A rule in the game includes counting the last digit of the total over 10 to indicate a score. So the number 13 will become 3, and 16 will become 6, but a 20 or 10 will be zero.

The yakuza origin began in the 17th century. The group originated from groups of gamblers and merchants that were the lowest class or riffraff of the society. The merchants were mainly peddlers of stolen goods (tekiya), and the gamblers (bakuto) involved in illegal games.

Sometimes they are thought to originate from bands of wayward or masterless samurai who became bandits or protected villages. Over time, they began to form organized groups stirring both contempt and fear among the society. And their influence and alliances increased throughout Japan.

In the 1960s, the yakuza recorded a membership of about 184,000. That was their highest membership level, according to police estimates. However, the numbers dropped to about 54,000 within this decade.

The yakuza comprises several hundred gangs with about 20 conglomerates. The Yamaguchi-Gumi, founded by Yamaguchi Harukichi in 1915, is the largest conglomerate (about 27,500 members).

Features Of The Yakuza

Here are some common features that identify the yakuza and set them apart from other criminal groups.

Yakuza groups have a hierarchical system that’s similar to a family. The gang’s head is the “oyabun,” which is a parent status or means boss. And each follower or recruit is the “kobun,” a child status or means protégé.

The yakuza hierarchy is a complex one. There is a leader of the conglomerate (kumicho), and the next in line is the senior advisor (Saiko-komon) and headquarters chief (so-honbucho).

The next level of command, wakagashira, oversees gangs in the region. And the fuku-honbucho who is in charge of several gangs too. The local bosses (sheteigashira) controls the regional gangs.

With the kumicho at the top, the saiko-komon controls various cities and areas. There are several other local bosses, advisors, and enforcers serving under them.

The familiar hierarchical structure strengthens through sakazuki (a ceremony that honors their familiar bonds). During the ceremony, they hold rituals to pledge their loyalty through sharing of sake which is symbolic.

The oyabun pours the kobun, a small amount of sake and a large amount for himself. They will both sip from each other’s cups, a form of initiation into the yakuza for the kobun that receives the sake.

The new followers have to sever ties with their biological family. It’s a requirement to prove their loyalty and allegiance to their boss.

A very significant way of identifying members of the criminal organization is through their iconic tattoos. The yakuza tattoos are mainly full “bodysuit” designs and part of their culture and history. Even though tattoos are unacceptable in Japan, it doesn’t stop the group from their culture.

The tattooing is done through a traditional technique known as irezumi. It involves the use of needle-tipped tools and toxic ink by hand. The tattoos are not just decorative; they symbolize the ability of members to withstand long periods of pain.

About 80% of members cannot go through the whole process to attain the complete bodysuit design. The process of creating the full bodysuit takes a very long period, almost a lifetime journey. It reflects endurance and toughness.

The yakuza also have a strict code of conduct, as members get punished for breaking a rule or misconduct. Such punishment includes yubitsume, which involves cutting off a portion of their little finger above its top joint with a razor-sharp knife.

They wrap the resulting piece and present it to the oyabun as a sign of apology. As long as the wrongdoing or misconduct continues, the wrongdoer will keep severing a portion of his little finger.

The punishment was a means the bakuto used to get gamblers to pay up their debts. For the yakuza, the punishment made the wrongdoer depend on the group. Continuously losing parts of his little finger makes it increasingly difficult for the offender to use a weapon (katana).

The practice is now a bit outdated, but you may still see older members missing a portion of both little fingers.

Some preferred punishment than the yubitsume includes monetary fines, shaving off the hair, temporary expulsion, or temporary imprisonment. However, they still use yubitsume for serious misconduct.

Some Code Of Ethics Of The Yakuza

The Yakuza has a code which guides them, and any member that breaks the code gets punished accordingly. Here are the codes guiding the group.

Don’t steal from the ordinary man:

The yakuza are notable for committing white-collar crimes, but they don’t steal from the everyday man.

They steal from the rich and help the poor when in need. As such, they don’t get involved in petty crimes. Because of this, it’s not illegal to be a member in Japan, even though it may be internationally.

They are involved in “lucrative” crimes that don’t affect the public or the innocent.

Respect and be loyal to your oyabun:

The criminal organization strictly adheres to their father-son relationship structure. The kobun is to obey the oyabun to the last bit. Every disobedience attracts punishment, including cutting off the little finger as an apology to his oyabun.

Never get involved with drugs:

The yakuza are against drug trafficking and drug use. However, a few conglomerates break this rule and make money through drug dealing. For the ones that don’t, members that are involved in drugs get punished severely.

The yakuza strictly forbids fighting among members, especially of the same conglomerate. Members are to protect each other. Younger members can sacrifice themselves to protect the older ones. Despite this, various conglomerates usually clashed at times.

Don’t touch the partner of another member:

The yakuza see themselves as a family. They also see their women as what they own. So no member can touch the other’s girlfriend or wife.

The organization believes in helping those in need. They are also respectful to people who don’t work against them.

The Activities Of The Yakuza

The yakuza carry out numerous shady activities like gun smuggling, sex trading, illegal gambling, blackmail, and extortion. They are also involved in politics. Additionally, some yakuza gangs are heavily involved in drug trafficking in Japan.

However, some conglomerates like Yamaguchi-Gumi prohibit their members from drug trafficking.

The yakuza are also involved in corporate blackmails and extortions (sokaiya). They buy shares to become shareholders in public companies. And that earns them the right to attend shareholder meetings.

Unlike most countries, such companies don’t release their annual reports in Japan, as it’s not a necessity. Only major shareholders receive such information. They use their right to get sensitive information about the companies. And use it to blackmail the companies for money.

Notwithstanding their criminal practices, Yakuza also invest legitimately in companies. For instance, the oyabun of one of the conglomerates (Inagawa-kai) bought a large stock in 1989. He invested $255 million in the Tokyo Kyoku Electric Railway.

They also engage in charitable acts like donations to victims of natural disasters in 1995 and 2011. However, their methods remain questionable as they rely on crimes like bribery. Even so, the group sees themselves as “ninkyo dantai,” which means chivalrous organization.

The Place Of The Yakuza In The Law

The yakuza have a complicated relationship with the police. That’s because the group is one of the least murderous criminal organizations in the 21st century, so their membership is not illegal. The police usually know the gang’s whereabouts, and their businesses are well-known.

At various times, the Japanese government passed laws to curb their excesses. Such laws are to prevent unlawful activities by the yakuza. The laws made it illegal for companies or businesses to do any business activities with the group.

The anti-yakuza laws also constrained the power of the organization. It even led to the arrest of some notable leaders of the group. For instance, Kiyoshi Takayama (the leader of Kodo-kai) got arrested in 2010.

Unfortunately, such anti-yakuza laws only increased the crime rates. That is because some members stopped adhering to their code of ethics. They started involving in robberies and similar crimes to make ends meet.

It’s not an easy feat to join the yakuza as an American. Apart from familiarizing yourself with Japanese culture, you’ll have to pass the entrance exam. And even when you succeed in getting into the group, you have to carry out criminal activities.

The yakuza have a history that separates them from the rest of the society as outsiders. Even though they are infamous for white-collar crimes, they also carry out chivalrous acts to help the needy.