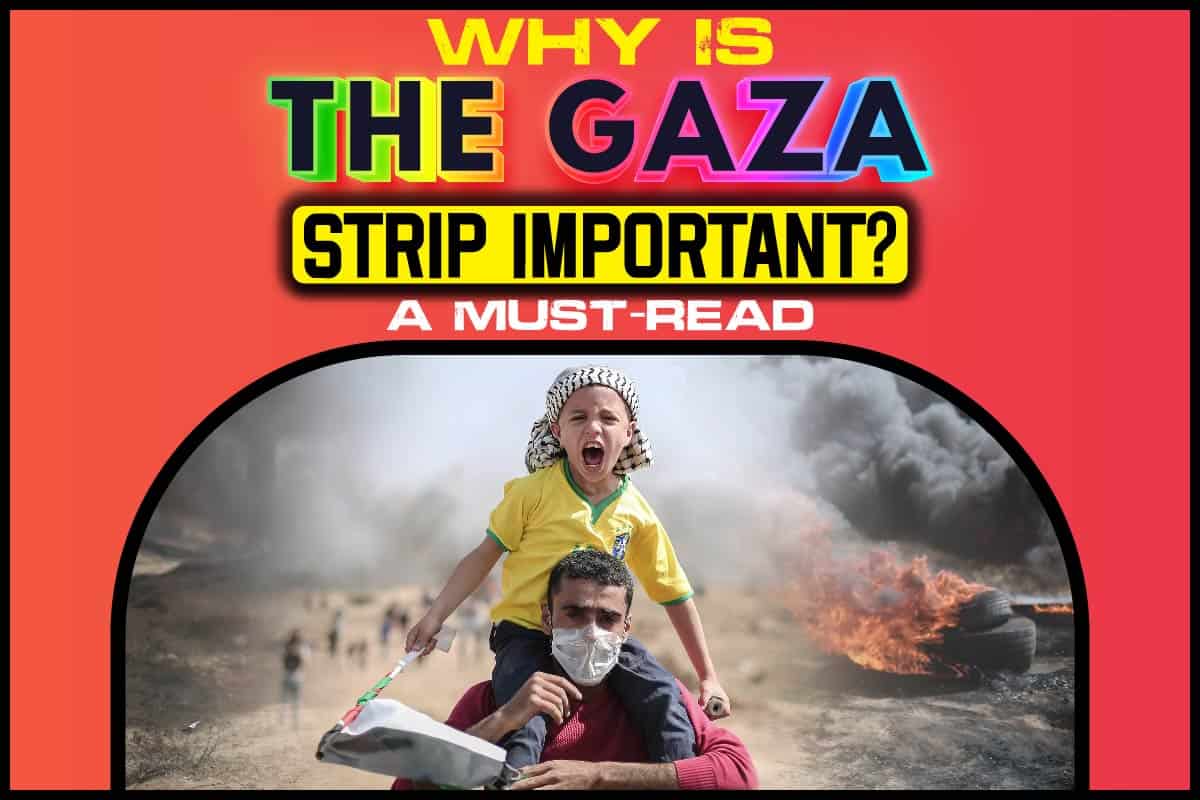 The Gaza Strip is a territory along the Mediterranean Sea sandwiched between Egypt and Israel. It stretches about 40 km long and 10 km wide.

The Gaza Strip was initially under Egyptian control after the Arab-Israeli conflict in 1948. Israel took control of Gaza in 1967 in the aftermath of the Six-day War.

Gaza is now under the control of Hamas, a Palestine-based political organization. Israel and several nations of the world consider Hamas as a terrorist organization.

So, why is the Gaza Strip important?

Why the Gaza Strip is important

The Gaza Strip is the centre of political conflict between the Jewish State of Israel and Arab-dominated Palestine.

The conflict is over each nation’s right to exist independently and land ownership, especially Jerusalem.

Jerusalem holds deep religious and cultural significance for both Jews and Arabs.

The Gaza Strip has suffered from recurring episodes of violence and political unrest for more than half a century.

So, how did this all begin? Let us go back to the beginning.

Gaza was under Palestine as a part of the British Mandate of Palestine. Jews and Arabs both lived in Palestine, and there were regular skirmishes between both people.

In November 1947, the United Nations adopted a resolution to create a Jewish and Arab state in Palestine. This plan also included a special regime for Jerusalem and Bethlehem.

The Arabs were opposed to a Jewish state in Palestine or the partitioning of any Palestinian territory.

On May 14, 1948, Israel officially declared independence. Arabs did not want a Jewish state in Palestine, so tensions snowballed into a full-blown Arab-Israeli war the following day.

Armed forces from the Arab nations, such as Egypt, Syria, Transjordan and Iraq, invaded Palestine. The Arab troops took control of Arab-dominated areas.

Then, they launched an offensive against Israeli forces, attacking Jewish settlements in the process.

The war lasted for ten months. In the aftermath, Israel took control of areas allotted by the UN resolution to establish a Jewish State.

Thousands of Palestinians fled their homes in the newly formed Jewish State to settle in the Gaza Strip.

More than 700,000 Palestinians settled in the Egypt-controlled Gaza Strip. Inhabitants in the Gaza Strip were trapped between Egypt and Israel.

This situation had severe economic implications for the immigrant Palestinians. The standard of living dropped considerably due to the lack of employment opportunities for Palestinians.

In 1950, Egypt had closed the Straits of Tiran to Israel. These were narrow waterways separating Sinai and the Arab Peninsula.

Due to the blockage, Israeli ships could not pass. Israel stormed the Sinai Peninsula in 1956. The main objective was to reopen the Straits of Tiran.

Israel bowed to international pressure to withdraw with guarantees that sea passage would be open. A United Nations Emergency Force (UNEF) stationed at the border.

On the contrary, Egyptian president Abdel Nasser declared that the place would remain closed against Israeli ships.

In May 1967, Egyptian forces ejected UNEF and mounted at the border with Israel.

The offensive began with airstrikes against Egyptian airfields, followed by a ground invasion. Israel invaded the Gaza Strip and Sinai.

Syria and Jordan would eventually come to aid Egypt. By that time, Israeli forces had greatly decimated the Egyptian military.

The warring nations reached a ceasefire agreement on June 11 and the hostilities ended.

In the aftermath of the Six-Day War, Israel took control of the Gaza Strip.

The Oslo Peace Accords were treaties between the Israeli government and the Palestinian Liberation Authority (PLO).

Israel and the Palestine Liberation Organization signed the Accords in two separate events in 1993 and 1995.

The Accords sought to grant Palestinians the right to self-determination, with the PLO as official representatives. The PLO was also to recognize the State of Israel.

The agreement created a self-governing Palestinian Authority limited powers. Under the agreement, parts of the West Bank and the Gaza Strip would now be administered by Palestinians.

Disagreements, tensions, debates would, however, continue until 2005. It was the year Israeli forces eventually withdrew from the Gaza Strip.

Hamas Took Control Of The Gaza Strip In 2006

Hamas – a militant Islamist organization – came to power after the 2006 elections in Palestine. They quickly took control of the Gaza Strip. Israel and the US see Hamas as a terrorist group.

The Gaza Strip became the centre of violence, bombings and political unrest since the Hamas takeover.

The Palestinians do not have an official army, although they have paramilitary groups.

They are a lot of weapons in the Gaza Strip – guns, rockets and other weapons. Israel controls the Gaza coastline, so it is believed that people smuggled these weapons into Gaza. Others believe that anti-Israeli forces supplied these weapons.

The Conflict Between Israel And Hamas

There have been several conflicts between Israel and Hamas since 2006.

The first one is the Gaza war. It is known as the Gaza Massacre by the Muslim world.

The Israeli government prefers to call it Operation Cast Lead. Hamas calls it the Battle of al-Furqan.

This conflict began in December 2008 and lasted for more than two weeks. What led to the fighting?

Before that time, there were reports of indiscriminate rockets firing from the Gaza Strip into Israel.

Hamas gave reasons for the rockets. They alleged that Israel invaded a tunnel that led to the Gaza Strip against the ceasefire agreement.

Israel decided it was time to put an end to the rocket fires. They also wanted to stop weapons smuggling into the Gaza Strip.

So, on December 27, 2008, Israel launched a military offensive against Hamas forces in the Gaza Strip.

On January 5, 2009, Israeli Defense Forces invaded the Gaza Strip by land, taking over many urban cities. Israel hit the targets it damaged during the airstrikes.

Hamas responded by firing more rockets and mortar into the southern part of Israel. Many civilians were killed in these attacks.

Israeli Defense Force announced a unilateral ceasefire on January 18 to bring the fighting to an end. Three days later, Israeli forces withdrew from the Gaza Strip.

The United Nations and human rights bodies reported that about 1400 Palestinians were killed in the conflict. The Israeli government said that 1,166 Israelis also died from the fighting.

There was another major conflict in 2012. Israel and Palestine continued to attack each other via airstrikes and rockets occasionally.

Palestinian authorities were not pleased with the blockage of the Gaza Strip and the Israeli occupation of the West Bank and East Jerusalem. So they fired rockets into Israel as a form of protest.

However, in November 2012, Israel launched another military offensive in the Gaza Strip. Hamas militant groups had fired more than 100 rockets into Israeli territories in less than 24 hours.

The fighting ended after one week.

Intermediaries brokered a ceasefire agreement. Six Israelis were killed from Palestinian rocket fires. Four of them were civilians.

One hundred and seventy-four Palestinians were killed in the conflict. One hundred four were civilians.

The Gaza Strip is a territory along the Mediterranean Sea sandwiched between Egypt and Israel.

The Gaza Strip is now under the control of Hamas, a militant Islamist organization.

The Gaza Strip is the centre of political conflict between the Jewish State of Israel and Arab-dominated Palestine.

The conflict is over each nation’s right to exist independently and ownership of land, especially Jerusalem.

The Gaza Strip has suffered from recurring episodes of violence, military action and political unrest for more than half a century.

Hamas won elections in 2006 and immediately took control of the Gaza Strip.

Since then, there have been violent conflicts between Israel and Palestine, with the Gaza Strip as the epicenter of the fighting.