Why Do Bulls Have Nose Rings? 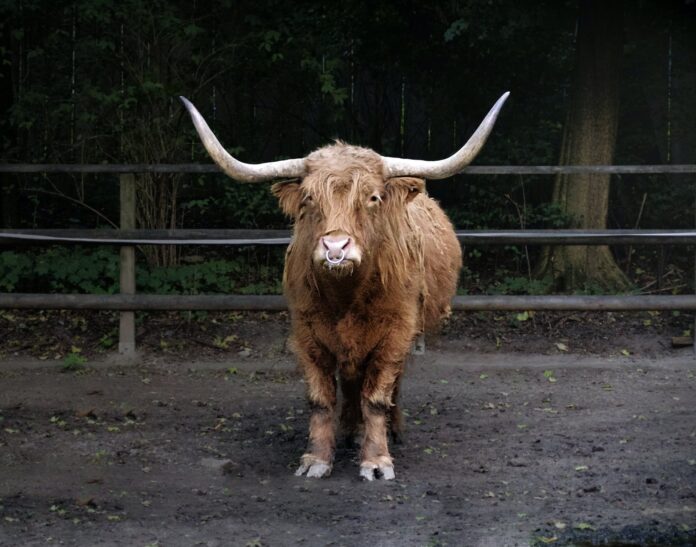 Have you also seen a bull wearing a metal nose ring? Also, you have heard several instances where a bull attacks people.

The nose ring acts as a safety measure to control an animal as a full-grown bull can threaten the handlers.

The ring is made of brass or stainless steel, which a veterinarian inserts in the bull between 9-12 months. The veterinarian hinges the ring onto the bull’s septum during that time.

The septum tissue is between the two nostrils that are quite soft. The area is so sensitive that a light touch on that part can keep the bull in line.

Not only this, it is effortless to install the nose ring by giving local anesthesia to the bull. Also, the nose ring is very easy to open, insert and lock in the hole.

Farmers even boast that a toddler can safely lead a bull with a nose ring, though field tests are not recommended. Still, they try it once for their safety. Farmers also use rings on other cattle, particularly in the show ring.

In this article, we will cover all the aspects related to the nose ring of the bull. For more information, keep reading till the end of this article.

What is the Significance of Nose Rings for Bulls?

The bull nose ring is typically made of aluminum, stainless steel, or brass.

The real reason for a bull’s nose piercing is to gain control over the dangerous animal.

Bulls are herd animals and are quite social. So the isolation that they experience before an event is the main cause of their aggression.

They are often alone in the ring, surrounded by people who end up harassing the bull. Bulls are less aggressive in their natural environment with other cattle.

The use of nose rings for animal control dates back to the dawn of recorded human civilization. According to research, they were used on animals such as bulls and horses in some of the earliest ancient societies.

We can also see the presence of Bull rings on ancient slates and tablets dating back thousands of years as symbols.

Bull nose rings are used as a form of protection for the herder or farmer so that they can control an aggressive bull. It is very important because it can stop an attack.

Do These Nose Rings Hurt the Bulls?

A veterinarian usually places nose rings on bulls for their safety and the bull’s health. The procedure creates a deep puncture wound on sensitive tissue, and the ring placement must be precise.

The use of an anesthetic also aids in the comfort of the bull while the ring is being installed.

The veterinarian may need to come back to check the fit and, if necessary, replace the ring. There is a need for many handlers for the placement of a ring at the right place and very strong restraints to keep the animal in place.

Bulls, like humans, will likely be uncomfortable for the first few days after getting the piercing. The animal will acclimate to the piercing as it heals, and any pre-existing pain should go away.

What Does a Nose Piercing Mean in a Spiritual Sense?

The majority of those people who are against body piercing consider the piercing process as a sin. According to their beliefs, you should never mark anything to your body parts, while others see it as meaning that you should not mark your body as a form of mourning.

According to spiritual research, nose and ear piercing have many spiritual benefits as it gives us acupressure relief. It is due to pressure on the points of the ear and nose by carrying distressing energy away from the body.

Do Bulls Hate the Color Red?

Bulls are colorblind to red color, which is quite surprising to hear. The true reason why bulls become irritated during the fight is because of the muleta’s movements.

Like all the other animals, Bulls are dichromatic. The term dichromatic means that they can only distinguish between two color pigments.

Apart from this, human beings can distinguish between three color pigments: red, green, and blue.

It occurs when the bull is threatened, stressed, or confused by the current environment in which it is present. As a result, using red outside such a setting is unlikely to enrage the animal.

Have you seen the significance of a bull’s nose ring and why veterinarians install it? The ring is something that farmers have been using for ages as an effective measure to control the bull.

The nose ring might look cruel to some people, but it is crucial for letting the bull stay alive.

Being one of the most dangerous animals by nature, bulls can attack a being at its worst. This is because of the environment where the bulls live and exist.

By making them wear such metal or brass rings into the septum, you can get rid of their volatile behavior by getting broad control over them.

Jakehttps://talkradionews.com
Jake is a passionate entrepreneur and writer who likes to spend a large chunk of his time researching, reading and writing. He aims to keep web surfers engaged with the latest news and articles on a wide range of topics. When he's not writing, he's busy catching a tan on the beach in Florida.
Previous articleWhy Does My Tooth Hurt When I Bite Down?
Next articleWhy Are the Bottom of my Feet Yellow?

How Many Minutes In A Year?