Why Do Americans Not Eat Meat Pies? Check Out The Reasons 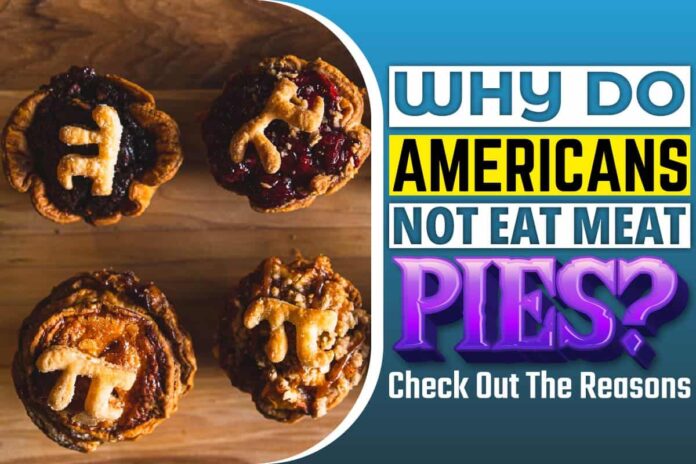 Meat pies are pies made with meat filling and other tasty ingredients. These ingredients may change depending on the location and the local preference. It may be baked or fried till the dough becomes golden brown, making the flavor even better.

Meat pies are famous in many countries around the world. They have endured since ancient times, having different forms and uses across time.

It becomes surprising then that the meat pie is not famous in America of all places, especially with its status as an estuary of different cultures.

Why Do Americans Not Eat Meat Pies?

Meat pies are no longer famous in the United States. There isn’t any apparent reason for this. It seems they just went out of fashion sometime in the 19th century.

Gradually sandwiches replaced them in the lunch boxes of workers and American pot pies on American dining tables. Some forms of meat pies still sell in the United States, but they are more of unique cuisines that are not generally popular.

The pot pies are pies made in a pot, as the name implies. They have a flaky pastry covering reminiscent of meat pies.

But unlike meat pies, pot pies have an almost soup-like filling that could contain beef, chicken, or a wide variety of other ingredients. The beef pot pie and chicken pot pie are the most popular in the United States.

You can make it in a baking oven, over a stove, even over a campfire in a pie iron. You can prepare the crust or buy it from a store. The crust consists of ingredients like butter or olive oil, flour, and shortening like every other pastry.

So you might be wondering how the meat pie and pot pie are different. Well, while the pot pie has pastry at the top, the meat pie has crust at the top and the bottom. It usually comes folded.

That’s not the only difference. It continues, the pot pie also usually contains a filling that is soup-like, the meat pie’s filling is always thick. And finally, the pot pie preparation takes place in a pot, meaning you can’t hold it in your hand and eat it; you’d need cutlery.

Countries Where Meat Pies Are Popular

You could be a traveler, adventurer, or just someone with an interest in foreign cuisine. It can also be that you have sadly never tried a meat pie before. We will be looking at some countries where these meat pies are famous and what makes them unique.

The meat pie has become a national symbol for many Australians. Some have even dared to call it their national cuisine. But, of course, you can also call it the Aussie meat pie.

The crust wraps around the pie with meat filling, and people usually serve it with ketchup or some preferred sauce. It can also come in various varieties, but the simpler it is, the better in most cases.

This pie is one of the most recognizable meat pies in the world. It combines beef stew, and wait for it – Guinness beer. Yes, Guinness beer! That’s where it gets the nickname Beef and Guinness Meat Pie.

The Sfija is popular as the open-faced meat pie. It is famous across the Middle East but has its origins in Lebanon.

Earlier preparations involved placing ground lamb and spices in grape leaves. However, the preparation has evolved into dough instead of grape leaves as the famous meat pie known across the middle east.

Different people can play with the flavor, but the essential ingredients of lamb, onions and tomatoes, spices, and olive oil remain the same. People usually make it in different sizes and serve it with yogurt.

Great Britain’s meat pie, also known as shepherd pie, evolved due to the need for people to eat on the go.

It was during the industrial revolution; workers had to work 12 hours sometimes during this period. So having something you could quickly make and easily snack on was very important. Many British families have shepherd pie recipes that they have passed down through generations.

Greece is one of the places that have been acknowledged for coming up with the pie. The pie recipe for the kreatopita still shares some similarities to the ones made thousands of years ago by the ancient Greeks.

This pie is another British variation of the meat pie. It, of course, incorporates pork in the filling. Also, unlike other meat pies, serving is best at room temperature, not piping hot.

Good pork pies usually have bacon, chunkily sliced pork, and ground meat, with a little bit of salt and pepper and herbs in the filling.

North African dishes are famous for being colorful and spicy. It’s what makes their cuisine so unique and exciting to the taste buds of food lovers worldwide.

Pastilla is Spanish for pastry; the filling comprises pigeon, yes pigeon, or chicken meat with egg, almond, and cinnamon. But like we have already mentioned previously, what sets it apart is the unique mix of spices used.

The Pirog is a famous Russian variation of the meat pie. It comes either closed or open-faced. Pirog fillings usually include meat, fish, mushrooms, cheese, cabbage, or potatoes. It even has a variation that is popular at weddings called Kurnik. It is domed-shaped.

The name Kubdari comes from a bread native to the Svaneti region in the north of Georgia. Georgia is famous for its bread-filled pastries. You fill the bread with beef or pork, a combination of the two, and spices.

The empanada gallega is very large and comes decorated with pieces of dough. Because it comes covered on the top and bottom by leavened dough, it gives them a darker tone and makes them stand out amongst other pies.

Different regions in Spain have unique ways of making their empanadas gallega that usually include beef, tuna, seafood, onions, peppers, and chorizo.

So there is quite a variety of pies to pick from and experience as you go along your meat pie discovery journey.

Places To Find Meat Pies In The United States

This is a bakery run by a mother and son. They moved from Staffordshire, England, in 2013. Edward had a dream of starting a bakery in the United States.

In 2013 his mother made that happen, and they moved to Savannah, GA. You can locate the baker shop at Pooler, GA, at 115 Canal Street.

It’s a traditional British Bakery; they have a robust menu of classic British pies. So if you are close, you might want to stop by and take a bite.

Gareth Hughes runs this bakery, a New Zealander and former cab driver in New York. He wanted people in his city to experience his favorite pastime meal.

The cafe started in 2003. You can locate it in the southwest corner of Prospect Park and sell Australian-style meat pies and sausage rolls. So drop by if you live in New York and want a taste from Down Under Bakery.

This place is in Athens, GA, usually known as a late-night pie place. It is open at other times of the day but having a nice finger bite pie and a few glasses of beer could even taste better. You’ll locate it at 151 E. Broad Street.

An Australian, Michael Peacock, owns The Flying Pie. He has lived in New Jersey since the 1980s. It’s a food truck that you might want to be on the lookout for if you taste some Australian pie.

They are also launching an online store, making it easier for customers to get a bite no matter their location. So if you are a New Jersey Local, you might want to be on the lookout for them.

There are others; with a little online search, you would be sure to find many more spots around you.

Meat pies are baked pastries with meat filling and are very popular in many countries. It can be convenient if you are on the lookout for a meal to take on the go. However, famous for its abundance of various cultures, America oddly does not seem to favor meat pies.

The pastry went out of style sometime in the late 19th century, and sandwiches and pots have replaced them.  However, you can find variations of the meat pie in some American restaurants.

Jakehttps://talkradionews.com
Jake is a passionate entrepreneur and writer who likes to spend a large chunk of his time researching, reading and writing. He aims to keep web surfers engaged with the latest news and articles on a wide range of topics. When he's not writing, he's busy catching a tan on the beach in Florida.
Previous articleEnsuring Old Code Runs On modern Windows
Next article5 Ways Music Can Make You a Better Student

Spring Renovation Ideas for Your Home 

Why Do My Gums Bleed When I Brush My Teeth?