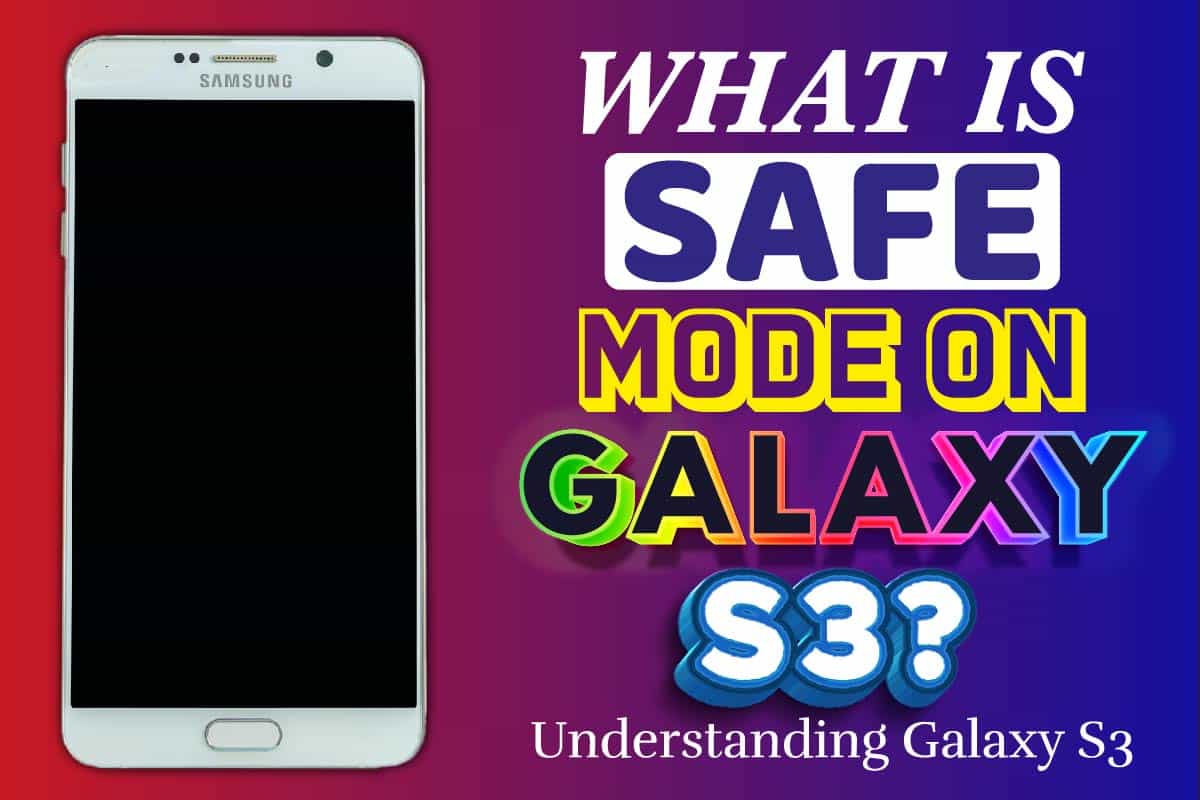 The Galaxy S3 or Samsung Galaxy S III is an android. It was designed, developed, marketed, and launched by Samsung Electronics.

By 2015, Samsung had sold more than 70 million units. Samsung introduced the Galaxy series, and Galaxy S3 is third in the series.

Galaxy S3 was once a powerful and popular model. Today, due to technological advancements, Samsung has better and more powerful models.

However, the Galaxy S3 model is still available, and you can get a new or refurbished one from retailers or the official store.

All phones have issues at times, and Galaxy S3 is no exception. However, if you are new to the Galaxy S3 world, you must experience some minor problems.

Don’t worry; there is a straightforward way to troubleshoot this problem. The safe mode feature has you covered.

What Is Safe Mode On Galaxy S3?

The safe mode feature disables third-party apps in the device. However, pre installed system apps remain enabled and will be restored after the safe mode is off.

Safe mode allows you to troubleshoot your Galaxy S3 and determine any issues behind device malfunction. However, after successful troubleshooting, you can restart the device for everyday use.

It’s a simple process. Here’s the guide on how to turn on Safe mode on your Galaxy S3.

Firstly, you have to power your device. This is relatively easy, and I believe any smartphone owner knows this. Press the power button for some second.

Several options will be highlighted, such as a restart. Next, click on “turn off.” It’ll automatically complete the process.

Secondly, turn your device back on. Once the Samsung logo displays, release the power button and immediately hold the volume down key for some seconds.

You can also do it when you see the first light. The phone will switch to safe mode, and the “Safe mode” message will be displayed on the screen. You can now unlock your phone and make a check.

How To Turn Off Safe Mode On Galaxy S3?

The easiest way to turn off safe mode on your Galaxy is to shut down your phone. When you turn it back on, the safe mode will be off.

The Samsung Galaxy S3 did come out several years ago. However, most people still use it as their primary phone.

This is because it’s a classic, and people out here do love such. So here are the common problems of the Galaxy S3 model.

A lot of users have complained about the lag in the performance of this model. This means the process is overloaded.

Therefore try deleting useless apps, cache, and any other unnecessary data. If it fails, you can factory reset your phone.

Most androids have issues when it comes to Bluetooth connectivity. Unfortunately, this problem is rampant with the Galaxy S3 model.

For a quick fix, turn off your phone’s Bluetooth and the other devices too. Try to reconnect after this. If it fails, check out the applications, certain apps affect Bluetooth connectivity.

The Galaxy S3 has excellent dimensions. From this model, Samsung did away with the rectangular design.

Instead, it came up with curved edges and round corners. In addition, the model comes in different colors like black, white, grey, red, brown, and many more.

Firstly, if not well-maintained, batteries tend to spoil quite fast. Regardless, most people feel this model’s battery life is not great. Having a fast battery-draining phone is quite dull.

It’ll force you to carry your charger to every place you go. To quickly fix the issue, put your phone on airplane mode when not using your phone.

You can still access WIFI on the mode, meaning you will be able to use almost all your applications.

Overheating is a common thing on most smartphones. It’s caused mainly by usage for long hours. Also, the phone is packed with several high-end technological features which can be strenuous on the system.

Another way to avoid this is not to use the phone while charging. Instead, remove the phone’s cover when charging and avoid multitasking.

This is when your phone frequently powers off and restarts. This issue can frustrate you. For example, the phone might restart before you save an important document and more.

It will lead to the loss of most information. However, this is mainly caused by faulty SD cards. Try removing the SD card; it takes it to a specialist for hardware checks if it persists.

The Galaxy S3 is one of the earlier models of the Galaxy series. Despite the years, this model still offers intense competition to smartphones from other brands.

However, the Galaxy S3 is still a catch because of its great features. Here are some of its features.

The battery is an essential part; a phone can’t operate without it. Galaxy S3 has a battery capacity of 2100mAh.

If well charged and used, it can last for quite some time. This makes the Galaxy a dependable device. You can carry out several activities without worries.

RAM stands for Random Access Memory. For example, the Galaxy S3 has a RAM of 1 GB. RAM is responsible for the phone’s speed. This model’s RAM capacity guarantees you a fast-functioning device.

Data processing and application running are pretty fast compared to their predecessors. The phone can also perform multiple functions at the same time.

RAM also increases the ability of the phone to access the internet. You can download videos, music and play games smoothly. Galaxy S3 is designed for basic smartphone operations.

Contrarily, the phone capacity cannot sustain multiple running browsers with lots of open browsers. However, Email functions perfectly and can be easily accessed.

The Galaxy S3 is a type of high android. It has a storage capacity of 16 GB. I feel like it’s a great size.

You can take photos, record videos, store files and download valuable applications. Another plus is you can sync your music, photos, and even apps.

When buying a phone, always check out its processing speed. I’m confident you don’t want to own a phone that’s so slow.

It’ll surely frustrate you. For example, the Galaxy S3 has a processing speed of 1.4 GHz.

This means the gadget can perform functions faster and better. For example, you can access the phone memory at a higher speed per circle.

Its display screen is sizable. The 4.80-inch screen is a good one. You can be able to view all the functions as they happen.

With this screen size, you can effectively edit documents and write messages. Access to productive apps such as emails and calendars is more accessible and fun.

It eases a lot of stuff like screen sharing during zoom illustrations. The screen display is relatively straightforward, and you can adjust lighting and letter size.

This will help you to avoid making mistakes during presentations, business transactions, and many more.

Its screen type is quite advanced. This model has a Super AMOLED touch screen. Its resolution dimensions are perfect and come with gorilla glasses.

The advantage of gorilla glasses is you can’t feel the dial. However, you can only read the words typed on the screen. Its sensitivity to touch is outstanding.

The Galaxy S3 has both a front (Selfie) and rear camera with an LED flashlight. The flashlight offers you to take a photo during the night. It also guarantees excellent quality photos that can be shared with family and friends.

It’s fitted with a GPS and direction, so your walks are well sorted. You won’t have the worries of getting lost whatsoever.

Use the GPS location to know your current location. The GPS can also be used as a tracker in cases of phone theft or loss.

Your entertainment is covered; it comes with an FM radio. In addition, it’s an RDS system and can support all radio systems.

The Samsung Galaxy S3 is a great phone. However, it does run into errors, or the application becomes buggy.

The easiest and best way to fix this error is by putting your phone in safe mode. The safe mode blocks all third-party applications from operating.

In addition, the Galaxy S3 is a great phone and can perform most smartphone functions. Today, all we need is a data connection, a few apps, and a display.