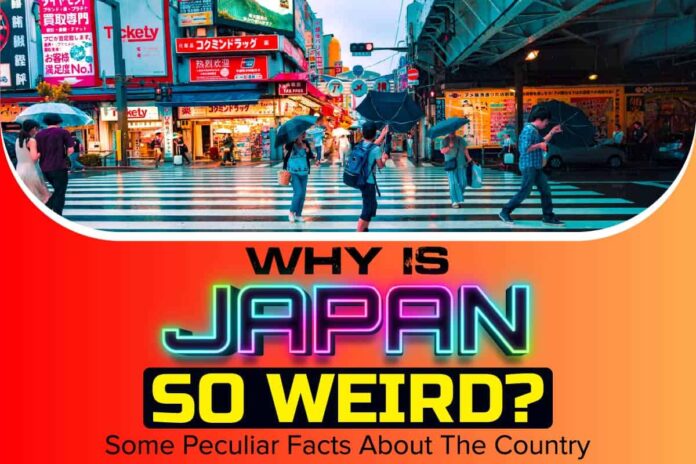 You probably won’t find a country like Japan that has advanced itself in technical progression while still having some awkward cultural paradigms!

Japan has a lot of beautiful, unique cultures that you might not find anywhere else in this world, but the few peculiar standards of this country aren’t always nice.

In this guide, we’ll talk about some reasons why is Japan so weird. As we focus on the weird features of this country, we’ll explain the reasons behind these cultural paradigms. Keep reading to learn about the unique manners of one of the most advanced nations of this world.

Some Weird Facts About Japan

What might sound weird to one, might not be the same to another. A nation’s cultures are formed with time and people. Japan has a few practices that may seem awkward to people with already weird cultures. Let’s talk about a few of them. Surely, you’ll find at least one of these very creepy or odd.

The Japanese diet is very interesting. They eat more protein-based foods and include a little fat in their diets, only as much as necessary. They’re also active in their lifestyle. Other than sumo wrestlers, you’d hardly see many Japanese who are overweight. It’s one of the strangest yet good things about the country.

Other than diet and lifestyle, another main reason why these people aren’t fat is that they’re serious about their health. They keep their health checked regularly and try to avoid food and habits that may increase the size of their waistlines.

Slurping and making loud noises while eating is generally considered a bad practice in most countries. But in Japan, you can make sounds while eating noodles, slurp if you need to get it down quickly. These aren’t considered bad manners there. Depending on where you live, this manner may sound quite weird to you.

Pachinko is a type of game similar to gambling. Although gambling is considered illegal in Japan, pachinko is still one of the most played games. It’s mainly done for recreation; however, the fact that it’s gambling and still not illegal, is quite interesting.

In rush hours, the total number of passengers can be so high that it’s basically impossible to hold all of them in public transport at normal density. Japan has a weird but innovative solution for this problem: passenger pushers.

The public transports have professionally hired people who push passengers to keep each other close. In this way, more people can fit into a small place. It gets quite overcrowded, but they do it to cover the growing number of passengers. This surely is one weird thing you probably didn’t expect to learn about Japan.

Japan doesn’t allow human cloning in its law. Cloning is prohibited, and if someone breaks this law, then he/she may have to get fined a big sum of money with a long prison sentence. The law is made to stop interest in human cloning.

Japanese have a special corner in their hearts for automated systems. They’ve made advanced robots, systems, technical solutions, and whatnot. One of the most prominent examples of Japan’s liking of automated systems is noticeable in the number of vending machines in the country. They are literally everywhere.

It’s a known fact that the Japanese work very hard. Overworking can lead to low-quality output and a lack of focus in the office. For this reason, many companies in Japan allow employees to take a power nap between office hours. A power nap is basically a fancy name for a short, few-minutes long sleep to regain energy.

No Shoes Inside Home

This might or may not be a weird-sounding fact depending on where you live. In Asian countries, it’s a trend to leave shoes outside of the home, at the main entrance. Japan is no different. If you’re an Asian, then you know this rule already.

The reason why it’s been practiced is that people want to keep their homes clean. Shoes that are worn outside carry dirt from the streets, and if they’re worn inside the home, it’s going to pollute the house, especially floors. Since the Japanese have a habit of sitting down on the floor while eating, the floors have to be completely clean.

The technological advancement of Japan can also be noticed with the toilets too. You’ll notice high-tech toilets in many Japanese houses and hotels that you’re unlikely to see anywhere else in this world.

Advanced toilets will have seat heaters so that your butt won’t feel cold at midnight or when it’s cold outside. Are you worried about making noises while getting your job done on the toilet? Rest assured as there are noise-canceling sensors and speakers on the toilet. They can block any noise with anti-noise.

Don’t want to turn the light on in your toilet at night? No worries, there’s a seat light on the commode. There’ll likely be a bidet as well, so you can come out of the toilet completely fresh and clean. These are just some of the features of an advanced toilet. There are dozens of features in a good high-tech toilet.

The penis festival takes place in Japan’s Kawasaki on the first Sunday of April. This yearly event is probably the weirdest festival for non-Japanese visitors. Rallies take place with large statues shaped in male genitals throughout the day. Foods and vegetables are shaped as genitals too. A day dedicated to genitals.

Some Japanese believe that the collagen coming from boiled pork fat is helpful for skin rejuvenation. So, bathing in warm ramen soup is believed to be a skincare routine for many. There are soup bath arrangements in many resorts where people can sit in a large tub filled with pork ramen soup and enjoy time with family.

A part of the education system in Japan’s classes is for kids to clean their own classrooms, toilets, and other places of the school. The practice starts while they’re very young. This might sound weird in comparison to other countries, but this surely is a great idea.

Japan has the largest number of kit-kat variations in the world. You’ll even get soy sauce flavored kit-kat too! Wasabi, corn, cheese, and many other unique kit-kat flavors are available in Japan, which you can’t find anywhere else. These flavors are unique to japan only.

The number of single, lonely people is quite high in Japan. As a solution for this, there are many cuddle cafes. Cuddle cafes are also known as sleep-together cafes. People come here, pay an hourly or per night fee and get a cuddle partner. This is insanely creepy. How does someone like this idea? Japanese culture is eerie.

Japan has a tradition of sending fancy fruits as gifts. Fancy means different shapes and styles, for example: square, round watermelon. Watermelon is the most common, but this is just an example. Cherry, guava, mango, and a few other fruits are sold at high prices just because of their exquisite shapes.

The fruits are just like their normal counterparts, but the main difference is in the presentation, which the Japanese are fond of. People will literally spend hundreds of thousands of dollars just to get a handful of designer fruits. The industry for well-shaped fruits is quite large in Japan, especially among rich people.

No Tipping in Restaurants

You’re probably used to seeing that customers tip their servers or waiters while paying the food bills. This is a common scene in almost all the countries but not in Japan.

The reason why tipping is so disliked in Japan is that the Japanese think that it’s an extra, which is unnecessary. Food should always be of high-quality standard, and that’s usually expected in Japan. If the customer likes the food very much, then he/she should give thanks to the server, and that’s about it. There should be no tipping.

However, tourist-based restaurants might have a different custom as outsiders have a tendency to tip their servers. You can try to tip after eating and might be able to pay it to your server if you’re in a tourist spot or a tourist restaurant. If you’re at a local Japanese restaurant, then it’s highly likely that the server will refuse your tip.

Japan isn’t America, neither is it Europe. It’s in Asia, and its cultures and manners are similar to other Asian countries. Some of these weird facts we talked about here are weird, some are good, but Japan is always very distinctive. Now, you know why Japan is so weird.

Jakehttps://talkradionews.com
Jake is a passionate entrepreneur and writer who likes to spend a large chunk of his time researching, reading and writing. He aims to keep web surfers engaged with the latest news and articles on a wide range of topics. When he's not writing, he's busy catching a tan on the beach in Florida.
Previous articleIs Travelling Overrated? Making The Right Travel Decisions
Next articleWhat Potions Does Not Contain Valerian Sprigs? Harry Potter Ultimate Potion Guide

5 Ways Music Can Make You a Better Student