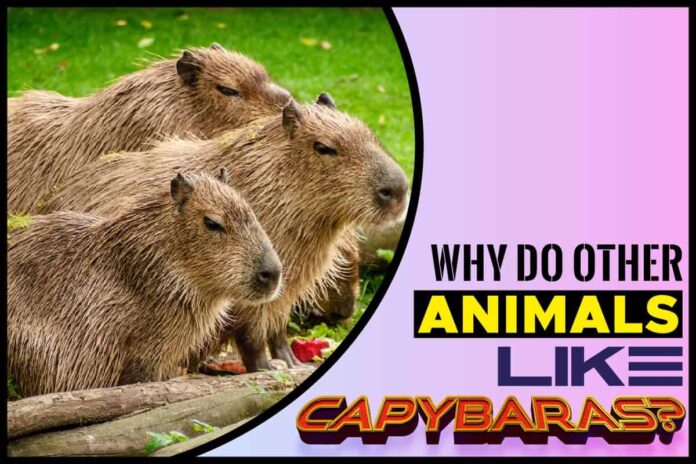 While certain animals get along with other species quite well, most don’t. But Capybaras don’t belong to any of those categories. All species, small and large, unanimously like them.

Capybaras are actually quite eccentric animals. They vary from other mammals in numerous ways, most notably their size and friendly nature. And that’s essentially what makes them a favorite of all animal species.

However, that is not all. These animals are unique in their behavior and incredibly helpful to others in the wilderness. Due to their kind and helpful nature, they are always seen surrounded by small animals like birds, monkeys, and even large ones like crocodiles!

In this article, we will discuss further the key reasons why all animals, including humans, seem to love these large rodents.

Capybaras are large semi-aquatic rodents with South American origin. These are the world’s largest living rodents. Besides the colloquial name, capybara, they are also addressed by a bunch of different names, including capivara, and capiguara.

And, their scientific name happens to be Hydrochoerus hydrochaeris, which means they belong to the genus Hydrochoerus. And, the lesser capybara is the only other surviving species in this genus.

Capybaras are herbivorous mammals that move in herds. In the wilderness, an average capybara lives for roughly 7 years. Size-wise, they are pretty big for rodents. Generally, they are 4.6 feet long with a height of about 2 feet. And they weigh the same as an average human.

If you considered beavers to be large rodents, you’re in for a major surprise. Capybaras are twice the size of beavers, and they’re also the world’s largest rodents.

However, these animals are not like any other animals, let alone other rodents. In fact, capybaras are exceptionally social animals that typically live in groups of ten or more. These creatures are extremely social and loving, yet they are also super relaxed and carefree.

Since they are semi-aquatic animals, they always like to dwell near water bodies. As a matter of fact, they have to reside near the water as they only mate in water. Like beavers, these rodents are really strong swimmers.

And, they know exactly how to escape predators by remaining submerged; they can easily stay submerged for about 5 minutes.

Essentially, these social creatures are incredibly helpful not just to their own kinds but also to other species. We’ll get into more detail about it in a moment.

Capybaras are an eccentric species of mammal that, surprisingly, is the only animal that all other animals appreciate. They are small creatures that are peaceful and amicable in nature, and their laid-back demeanor helps them win over other animals of all kinds.

There are a number of reasons why the largest existing rodents are admired by all other animals, both small and large. And, the most prominent ones have been discussed below.

One of the key reasons why other animals like capybaras is their easygoing and carefree nature. They are extremely laidback about what goes on around them. Other animals can do whatever they like as long as it doesn’t hurt the capybaras; they don’t mind.

Because of this, they are always accompanied by monkeys and other mammals. Even little creatures, such as birds and cats, feel at ease in their presence.

Zoos often pair them with other animals of the same area because of their gentle demeanor.

Despite the fact that capybaras are little animals that weigh nearly the same as ordinary humans, they are extremely gregarious creatures. Their calm and carefree lifestyle contributes to their highly gregarious disposition.

Furthermore, their social nature is further influenced by the fact that they live in large groups of over 100 in the wilderness. Capybaras usually guard their region collectively. In fact, the female animals occasionally feed each other’s babies.

Capybaras can never be seen alone; they are always huddled in large groups. One of the reasons they choose to be in the company of their own kind is that being alone leads them to experience separation anxiety. As a result, they may become aggressive.

Basically, capybaras are regarded as calm, relaxed creatures because they tend to sleep during the day. And because of this, almost all animals wants to be surrounded by them.

Aside from their own species, they are frequently spotted in the company of small and large creatures. They can be seen in the wilderness with birds, ducks, monkeys, and even crocodiles!

3. Capybaras Are Engaged in Symbiotic Relationships

Being social animals, they just allow little birds to sit on them. As a result, they are often referred to as “nature’s living chairs.” As previously stated, they are known to mix with animals that are not of their own species. Birds generally enjoy being near them or on them.

Furthermore, they have symbiotic relationships with other animals, birds to be specific. This signifies that the capybara benefits these little animals, and so vice versa.

A symbiotic relationship is defined as a close interaction between at least two species that benefits either one or both of them. In this case, both specials- the capybara and the bird- get benefited from this relationship. Here’s how.

Capybaras allow small birds to rest on their backs. And, when seated, these birds consume insects from the capybara’s back. From this exchange, the capybara gets clean, and the bird gets a free supper. As a result, both creatures benefit from one another.

Apart from the symbiotic relationship, capybaras assist other creatures in a number of ways.

One example might be assisting birds in finding their next food. This is accomplished in a straightforward manner. Small insects lurking in the grass are uncovered when capybaras graze. This leads to birds finding them a tasty treat. But, that’s not all.

Capybaras, as previously said, are social animals who prefer to defend their area in groups. They are also more tolerant of other animals because of their kind and laid-back demeanor.

This is why they always warn their companions, not just their kind when they are in danger. For instance, when predators are around, they make a warning call, which benefits all other wildlife in danger of attack.

Can You Keep Capybaras As Pets?

Capybaras are small, cooperative animals that live in harmony. Aside from being great with other animals, they also get along well with human beings. Although they are known for being social and amiable, they are also extremely intelligent. This is why they are desirable exotic animals that everyone wishes to have as pets.

While mainly cute and loving, capybaras can be a difficult pet to have. These creatures are permitted to own in certain places, including Texas and Pennsylvania. However, other states, while legal, demand licenses.

If you decide to keep these small mammals as pets, you must get at least two of them. To survive, they must always be accompanied by one of their own. If they do not, they will suffer from severe separation anxiety, and the consequences should be avoided at all costs.

And, if you’re concerned about them getting along with your cat or dog at home, you don’t have to be. Other animals are drawn to them because of their calm and relaxed demeanor. They’ll get along better than you could dream!

Anyone who is familiar with these small mammals knows that capybaras are one-of-a-kind creatures. They are the only living creatures that all other species adore.

It’s due to their easygoing and calm demeanor. Capybaras are unlike any other mammal in terms of proportion, friendliness, and intellect.

They move around in groups and protect each other. Since they are highly tolerant, other animals such as birds, ducks, monkeys, and a variety of others appear to rely on them. Being sociable creatures with great intellect, they protect all animals in times of danger in the wilderness.

In addition, they also make great pets if you are up for a little bit of challenge.

Jakehttps://talkradionews.com
Jake is a passionate entrepreneur and writer who likes to spend a large chunk of his time researching, reading and writing. He aims to keep web surfers engaged with the latest news and articles on a wide range of topics. When he's not writing, he's busy catching a tan on the beach in Florida.
Previous articleWhat Is A Group Of Vultures Called? Read To Find Out
Next articleDo Rogues Get Extra Attack: This Explains What You Need To Know

Tips to Boost Your Internet Speed

Change your future with bitcoin trading