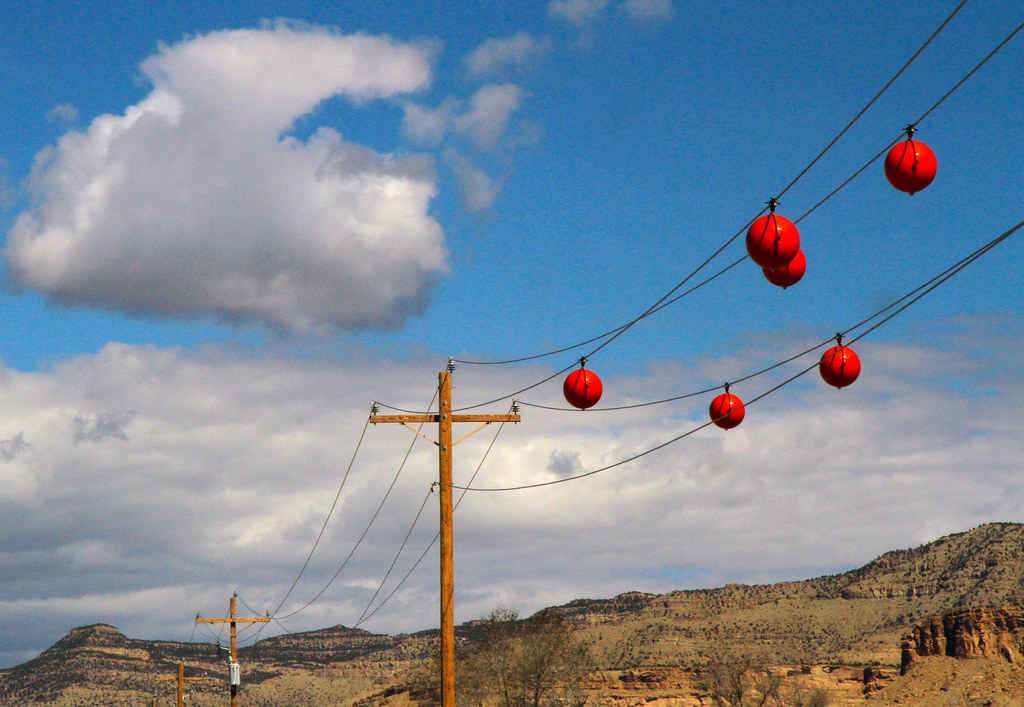 You probably would have seen those big colored balls hanging on the transmission and power lines. But are you aware of their purpose? For what reasons are they hung between the wires?

These balls are actually called aerial marker balls. They are placed on power lines as a visual warning sign, helping low flying aircraft avoid getting into contact with high voltage wires.

In this blog, we are going to learn about these balls in detail. Here are the topics we’ll cover.

So are you ready to understand the science behind those colored balls you see on power lines? Let’s get started then!

What Are Aerial Marker Balls?

As you know, the balls you see on power lines are called ‘Aerial Balls,’ also known as ‘Aerial Visibility Marker Balls.’ The weight of these balls is around 17 pounds each, which is approximately 7.7kg.

The fascinating part about these balls is they aren’t of the same color everywhere. In some places, you might see a red ball and orange in others.

The most commonly used color for these balls is the International danger orange. However, white, red, and yellow can also be used for specific situations depending upon the surroundings for clear visibility.

Therefore, if you notice the color of the balls varying from place to place, it’s because there are some hidden safety reasons behind it.

Now when you know what aerial marker balls are, it’s time to dig deep into the details. But, first, let’s understand the purpose they are used for. Here we go!

Aerial marker balls are used for safety purposes. According to FFA (Federal Aviation Administration), these balls are used to protect infrastructure and human lives by making power lines and high-tensioned wires visible to the aircraft, planes, and low flying helicopters.

Here are the details of the primary purpose of aerial balls.

As said above, the major purpose of aerial balls is to offer visibility. The huge orange balls that hang on the transmission lines in the country’s middle are primarily meant for airline pilots.

They act as an indicator to airline pilots, signaling the presence of power lines, helping them avoid hitting the lines.

When there’s a small airport located in the country, aerial balls help to guide the pilots to land safely. You might also find these balls on power lines that cross ravines, canyons, and rivers.

Other than being used near airports, aerial balls are also used in areas where aircraft movements are frequent. For example, some hospitals offer the transfer of patients through helicopters.

Since hospitals are not designed the same way as the airports, the balls installed on the power lines near the hospitals can effectively guide the pilots.

Also, these balls might be used in the power lines in areas where emergency medical evacuation is common.

When we talk about the types of aerial marker balls, the list is quite long. The internet is full of blogs containing explanations of different types of these balls. But most of them have shared the ones that are rarely used.

Our priority is to give the right and updated information to you. So here are the primary and most commonly used types of aerials. Go have a look!

It’s one of the most common types of marker balls, used since the 1960s. This ball features a spiral line, which helps to fasten it on the transmission lines securely. In addition, ABS balls have superior quality color retention characteristics.

Plus, they are also easy to install from a helicopter or bucket. The prices of ABS balls start from $170 and are available in sizes 6, 20, 24, and 36. Also, they come in a wide variety of colors, ranging from orange to white.

EHV 115kV+ Marker is specifically designed to be installed on transmission lines of up to 345 kV. Extra design features and special coating are incorporated in this marker, helping it reduce the corona effects that cause melting or burning.

These balls are made from aluminum, making them lightweight compared to other balls. High-temperature balls start from $295 and are available in sizes 12, 24, 30, and 36.

These marker balls are designed with two LED lights that can illuminate 24/7 to make the transmission lines more visible at night and day.

They also contain a solid-state regulator and capacitor, which pick up the electrical fields generated by the transmission lines to light those two LED lights. These marker balls are also made from aluminum, and the diameters in which they are available are 12, 24, and 36.

Now you know what those balls are that hang on power lines and for what reason they are hung. So the next time you are traveling through the countryside and see these balls on the transmission lines, you’ll know their purpose and importance.