Renewed Vs Refurbished – What Are The Differences Between These Two? 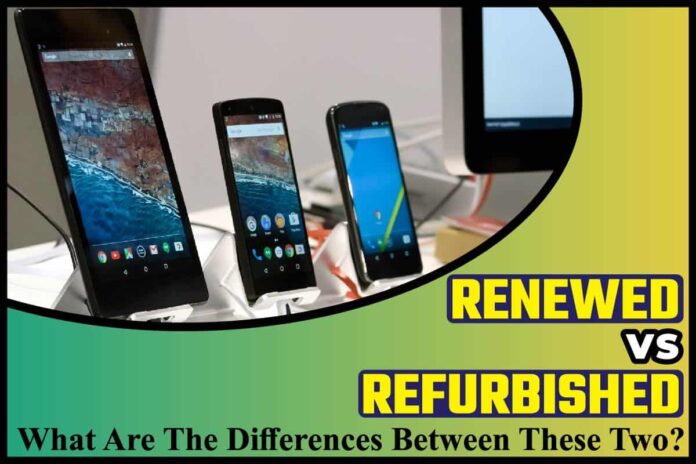 Renewed and refurbished are used interchangeably, but they’re really the same, to be honest. You won’t be very wrong if you use these two terms to mean the same thing.

But since you’re reading this article, you want to know the absolute differences between these two. We’ll talk about that in this guide.

Differences Between Renewed And Refurbished

The main difference is in marketing. Amazon uses the term renewed to mean their product is refurbished. But some companies really do have a difference between these two. The difference is actually very little.

Renewed means an old, used product is checked for problems, and the faulty parts are replaced with brand new ones. Refurbished, on the other hand, means the faulty parts could be replaced or repaired to work like a new one. But you don’t have to be obsessed with these differences. They mean the same most of the time.

Since the differences aren’t significant, we’ll try to discuss buying refurbished goods in this guide. We’ll talk about what’s good to choose refurbished and what not to. We’ll also have a look at some points to be careful about while getting renewed stuff.

Since you can never really be a hundred percent sure about the refurbished device that you’re getting, you can at least save yourself from some common risks. Let’s talk about a few of those things that you should have a careful eye for –

Officially refurbished devices come with a warranty, for example: Apple devices. But you won’t get a full year of warranty with many products. Some will give you one to three months of warranty at most. You should check warranty time and coverage well before you make the purchase decision. Avoid no-warranty ones.

Many companies offer a month-long return time. Some do less time. But having a return policy is always good to have. What if the product turns out to be different from what you thought while buying? What if there’s a difference inside that you didn’t know about? A return policy helps with cases like these ones.

Extra Items in the Package

Suppose you’re buying a refurbished desktop computer for $500. But as you check the listing of the product, you realize the seller is only offering the CPU of the PC for $500. It means you’ll need to buy the accessories to make your desktop complete. You’ll have to buy a monitor, speakers, keyboard, mouse and other things.

Such a small price difference isn’t worth it most of the time. You’re saving a mere $100, but you could’ve gotten a computer in super mint condition if you chose to get the new one.

So, always check what the refurbished one includes in its packaging. Go for it only when the deal is good and has a significant amount of financial value. Otherwise, think of other alternatives before making a final purchase decision.

Because electronic devices do have a lifetime, the more lifetime a device gets through, the closer it gets to its end. Look how long it’s been used before and check the condition of the internal components by a mechanic if it’s possible. You don’t wanna get a dying device at a cheap price. It’s a loss project, after all.

Now that we have YouTube and a lot of review websites, it’s easier than ever to know about a product deeply. Suppose you decide to buy a smartphone. Your next step should be to study its features and common issues deeply. A purchase is an investment, and you wanna make sure that you make the best one out there.

Watch YouTube videos, go through in-depth reviews, and learn about the common and uncommon problems this product has. Spend a good amount of time doing the research. Once you feel comfortable, order the refurbished product.

After you get your product, check whether it has the same features as mentioned in the reviews. Check for the issues of this product that you previously learned about. This checking process should happen as quickly as possible because you want to make quick decisions here. If there’s anything wrong, return it as early as possible.

Some Goods To Avoid Buying In Renewed Or Refurbished Condition

Not all products will be in tiptop condition in a refurbished state. Some are–

As a printer processes more ink with time, it goes through some wear and tear that are irreversible. Whatever you do to bring it back to a new-like condition, it won’t just work. A used printer is never the same as a new one. So, it’s better to go for the new one unless the deal seems too good. You’re better off avoiding the usual deals.

Large electronic devices are easily prone to damages in shipping. Television, washing machine, refrigerator – these are some examples of devices that could easily get damaged while carrying. If possible, try to buy a brand new one of these.

Moreover, these devices won’t always come with a long warranty. Suppose you’ve ordered a refurbished TV. During the shipping process, the TV can fall down while carrying, and the fall may damage some of its components inside of it.

As you receive your TV, you think everything is fine because it seems so. But after a month you start to see a change.

You start to see that there are some color differences in the pixels, or some pixels have died. Then you think of replacing the panel. You check the prices on the internet just to realize the panel itself costs about half of the price of your TV.

The scenario I described is a fictional one. But this can seriously happen. Some devices are very unreliable. You should think a dozen times about buying something like these before you make your decision.

Another product that gets damaged too soon is hard drives. These things will die within a few years once someone starts to use them. Don’t waste your time and money by trying to get a good deal on something cheap like this one. You’ll lose money and, in the long term, a whole lot of your valuable time.

Some Goods To Get In The Renewed Or Refurbished State

Smartphones can get really cheap in their refurbished forms. The reason is simple. Let me give you a real example.

Suppose you’re thinking of getting a new Samsung phone, the latest model, for example. This may cost up to $1000 or more if it’s a high-end one. But the thing with Samsung and other Android phone manufacturers is that they reduce their phone prices as soon as the next one drops.

The reason behind following this marketing strategy is to allude the consumers to both the new and the old ones. They release the new model with high performance and better tech while they reduce the price for the old ones. But this is for the brand-new phones; what does it have to do with the refurbished models?

As the old models get cheaper, the users of those phones try to sell their phones to refurbished product providers for a cheap price. The providers take the phone in and fix the damages and offer an attractive price for them.

The price for a refurbished phone that’s just a few months older can be quite low from a brand-new one’s retail market price. If you choose this option, you get to save your money as well as get a phone that’s almost in a brand-new state. You get two birds with one stone. Isn’t it a nice deal to avail?

Similar to phones, tablets, and other computing devices can get you a really good deal if you take enough time to do product research and current market rates. Since you’re trying to save money, you should be ready to spend some time on your product research. It’s going to be worth your hassle.

Pros And Cons Of Getting A Renewed Or Refurbished Device

You can’t always get something in its perfect shape when it’s renewed. Let’s talk about the good and bad of renewed device purchases.

Let’s see what the benefits of purchasing a renewed device are:

Now let’s focus on the major problems of purchasing a renewed device:

You’re now clear about the confusion regarding renewed and refurbished. You’ve got some knowledge about making refurbished purchases and being safe with your decisions. Always do the research as much as possible to stay on the safe side. Don’t give in to internet hypes. The decision is yours to make.

Jakehttps://talkradionews.com
Jake is a passionate entrepreneur and writer who likes to spend a large chunk of his time researching, reading and writing. He aims to keep web surfers engaged with the latest news and articles on a wide range of topics. When he's not writing, he's busy catching a tan on the beach in Florida.
Previous articleWhat Colors Make Green: The Beautiful Green
Next articleAre Mexicans Native Americans? The Answer Might Surprise You!

Do Dogs Have a Sense of Time?

Why do Whales Explode?