Are Mexicans Native Americans? The Answer Might Surprise You! 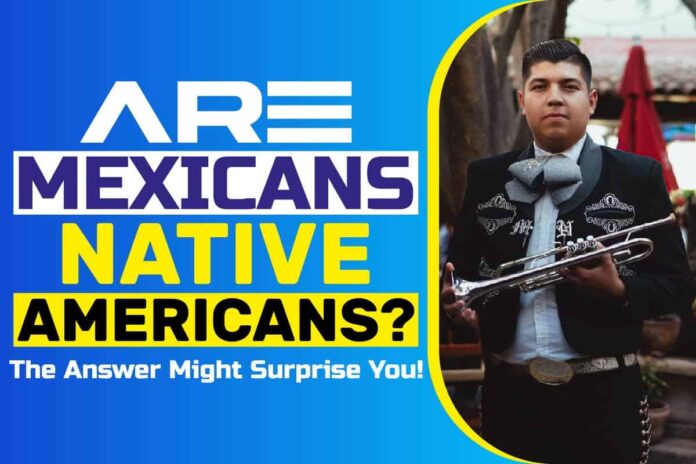 Someone once asked me if being a Mexican meant being a person of mixed ethnicity. I had no answer ready for that question. The thought had been bugging me since that day.

I took my time researching through various pages and sites, trying to find how Mexicans came to be. Of course, every nation form after conquering the land.

As the land began to fill with people, my question was, who resided there before? That is how I proceeded with the search. Do you know what I have discovered so far?

This somehow shows light to the dark passages I had no knowledge of. Let me indulge you with a more interesting history.

Over the years, studies revealed not one but several ethnic groups involved in making Mexico as it is now. The three mentioned below are the most recognizable ones.

It was during the 19th and 20th centuries when the Europeans began to immigrate to Mexico to settle. However, the Spanish were there way before, thanks to the Spanish conquest against the Aztec Empire.

Since the Spanish were primarily soldiers, they decided to live in the country. They married the native women of Aztec currently living after the war. That was how the intermixing of whites and Native Americans took place.

Of course, the population of such mixed ethnicity rose in number, much later in the 20th and 21st centuries. If you meet a Mexican with a white ancestry tree line, there is a high chance of tracing it back to Spanish descent.

When a Mexican has Spanish and Meso-American blood, he/she is viewed as Mestizo. The Mestizos have a unique way of identifying themselves.

They do not characterize themselves as Spanish nor Indigenous people. The Mestizos do not follow either of the cultures from their heritage. Instead, they classify them as Mexicans who follow the traditions from both sides.

This identity is more about culture than of the biological root. Therefore, the modern communities in Mexico have found it profoundly influencing.

There are many famous people with Mestizo identities. The point is Mestizo can have different meanings in various groups. Some consider the Maya-speaking community as Mestizo.

Hence, Mestizo is a word that offers a varied explanation. This makes Mestizo being the widest population among the Mexicans.

Did you know that there are about 62 indigenous languages in the Mexican territory? It gives you an idea about how extensive and deep their cultural root is.

In the beginning, this was the group that once swelled in number due to the diverse sections. However, the population of such a group now grows at a slower pace.

The percentage population might have decreased, but the indigenous groups still remain. This proves that Mexicans are practically the descendants of various Native American crowds.

A Comprehensive Look At The Indigenous/Native American Groups

This section overall will tell you how broad the indigenous/Native American population is. They are scattered all over the states in Mexico.

If there is a particular trait the Tarahumara/Rarámuri are recognized for, it is their ability to run long-distance. It is one of the oldest indigenous groups that inhabited the Chihuahua state in Mexico.

The Tlapanec has the higher populace in the Guerrero, Oaxaca, and Morelos. Their language comes from the Oto-Manguean language family. Throughout the years, the Tlapanec population has increased to around 100,000.

Known for their conservative culture, the Mixe is one of the indigenous groups that still speak their language. They mainly inhabit the state of Oaxaca, the eastern highlands.

You will find the Purépecha group mainly in Michoacán, Mexico. The northwestern region is highly concentrated with this Native American group.

It is more of a language than a group. However, people who speak it are from the indigenous people of the same-named group. Yet, the language has many variants where some are even unintelligible.

Most Chinantec people live in Mexico or Oaxaca.

This group of people is from the northern side of the Chiapas highlands. They speak in a language that is derived from the Mayans. It is also called Cho’l.

The Huastec indigenous people are rather scattered all over the Hidalgo, Veracruz, Tamaulipas, and San Luis states.

What is noteworthy about the Mazatec people is the religious representations. It is the synchronization of their tradition and Christian beliefs.

The Mazahuans mostly live in the northwestern side of Mexico. The significant cultural catch in their group is the women’s dress. The outfits are almost in extinction despite the efforts of keeping the tradition alive.

Despite the different names, the Tzeltal are Maya people who reside in Chiapas highlands. They have their distinctive language to differ from the other Maya indigenous people.

The Tzotzil are also the Maya people who inhabit the central Chiapas highlands situated in southern Mexico.

Many believe that the Totonac group in Mexico was the first to build the pre-Columbian city El Tajín.

The Otomí people cover most of the Mexican Plateau. Highland Otomi and Mezquital Otomí are the most populous of all.

These people are often known as the Mixtecos as well. They are the Meso-American descendants who inhabit most of Guerrero, Puebla, and Oaxaca.

The Zapotec group from the indigenous people has the third-largest population in Mexico. If you want to look for a Zapotec bloodline, Oaxaca is the best state to start with.

Besides, they also exist in the surrounding states. They have overwhelming variants of language groups, including dialects.

This is a name that the modern civilization imposed to characterize the language and ethnicity of the Maya people. They inhabit the lands of Guatemala, El Salvador, and Mexico mostly.

The Nahuas are the largest amongst the indigenous groups. They mainly reside in Mexico and El Salvador. The Nahuas have a language that comes with many variants. This group is considered the closest to the Aztecan people.

If you think that was all there is to learn about the Native American groups in Mexico, you are wrong.

There are more groups with numerous language families that still reside in Mexico. The Tepehua, Kanjobal, Pame, Huarijio, Chontal of Oaxaca, Chichimeca Jonaz, Tacuate, etc. are some of the Native American groups.

Their ancestors have been in Mexican land for as long as one can remember. Some have migrated from the neighboring regions, while others were divided from the larger indigenous groups.

More names include Choco, Chuj, Jacaltec, Mexicanero, Pima Bajo, and Ocuiltec. All these groups share the native genetics but with lesser and lesser speakers of their languages.

It means that the population density may be moderately high, but the people speaking these languages are relatively low.

Now some of the groups form the territory amidst the highly concentrated Native American groups/tribes. Hence, a lot of them have a low population or have almost disappeared.

Still, many of these bloodlines inhabit various parts of Mexico. The people from Jacaltec, Lacandon, Kekchí, Ixcatec, K’iché, Seri, etc., still try their best to preserve the languages and cultures.

Even the groups like Motocintleco, Paipai, Thono O’odham, Kaqchikel, and Cocopah struggle to upkeep their traditions. However, there are very few of them alive, making it difficult to increase the population.

The Native American Mexicans who hold the poor number or population have it far worse. Despite their small line of heritage derived from other groups, they are proud of their unique titles.

Some examples include the Kumiai, Cochimi, Kikapú, Ixil, and Kiliwa. They have inhabitants of less than 500! Even then, these indigenous tribes are well known in the Mexican regions.

Most of them reside near the borders of various Mexican states. Some even live closer to the American territories.

Lastly, the one group that includes a little more than 50 people in the populace is recognized as Aguacatec. They are also from the Maya people but speak in a language that is close to the Ixil.

However, only a few people speak the tongue. As a result, many of these Native American groups with lower population is losing the languages formed originally in each tribe.

To conclude, Mexico is a country filled with diverse races and ethnicities. I do not believe you will find a single person who is not mixed and be identified as pure Mexican in this day.

Remember that the Aztec Empire was here long before Spanish colonialism.

Jakehttps://talkradionews.com
Jake is a passionate entrepreneur and writer who likes to spend a large chunk of his time researching, reading and writing. He aims to keep web surfers engaged with the latest news and articles on a wide range of topics. When he's not writing, he's busy catching a tan on the beach in Florida.
Previous articleRenewed Vs Refurbished – What Are The Differences Between These Two?
Next articleThe Battle Between The Wolverine And The Honey Badger

Is Rockville A Good Brand? A brand That Is Rocking Sound Engineering

Is Nature Made A Good Brand?