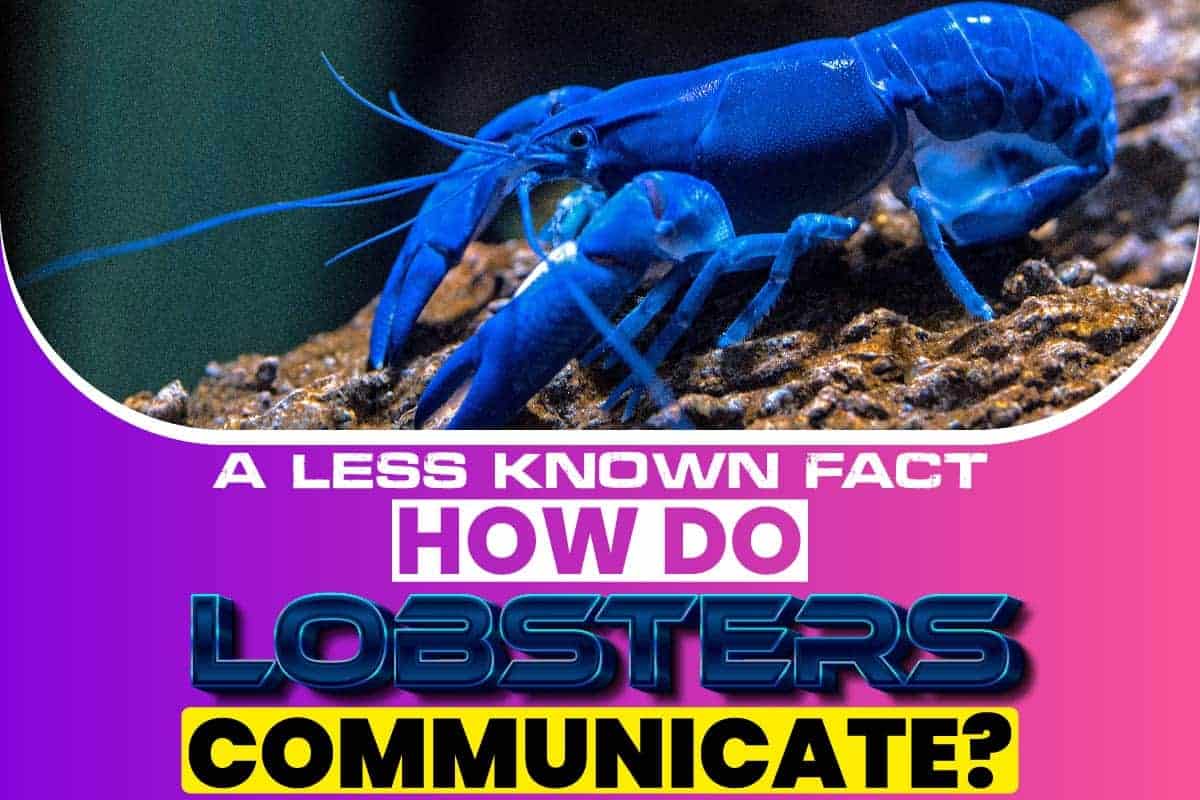 Lobsters are shellfish that are found deep under the ocean. To many humans, they are known as delicious and expensive sea delicacies.

And while encountering a lobster, it is very typical to become curious about how this animal survives. What do they eat? How do lobsters communicate?

There are so many kinds of lobsters in the world. All of them pretty much carry out the main functions in a similar way.

When it comes to communicating, they have a certain way (no, it is not with a voice). Hence, if you have wondered how lobsters connect, read more to find out!

An Introduction To Lobsters

Lobsters can be found at our dinner table, or maybe in the ocean if you like to explore sea animals. We are all familiar with lobsters one way or the other.

But how well do we know about them biologically? What do they feed on? How do they carry out their bodily functions? Are we familiar with all these things?

Well, lobster is the name of a large family of several species called Marine Crustaceans. The members of this family include Homeridae, sea crayfish, shovel lobsters, deep-sea lobsters, etc.

Lobsters live on sea floors, and they have five pairs of legs. The first pair of legs is usually larger than the others, and three of the pairs have claws.

Interestingly, the giant claws of lobsters can put immense pressure on objects, and they use it to open mussels and clams.

In addition, lobsters can live anywhere underwater, starting from oceans to coastlines. They prefer to live under self-dug burrows or giant rocks. Whether it be muddy or rocky surface, lobsters are found in it all!

Lobsters are omnivores. They are highly convenient and eat almost anything edible under the sea.

Generally, lobsters feed on mussels, small fish, worms, crabs, plants, etc. It’s fascinating and rare, but sometimes some lobsters have attempted to eat other fellow lobsters in a captive condition.

On the contrary, lobsters are known to live by themselves and hunt for food at nighttime. Another interesting fact about lobsters- their teeth is in their stomach!

They swallow their food as a whole and then process it inside their stomach through the ‘Gastric Mill.’

Lobsters could be long-living animals if left to live by themselves. Some can survive for as long as 100 years.

They can become more than four feet in terms of length, and their weight grows immensely alongside. In addition, due to the high amount of copper, lobsters have blue blood!

How Do Lobsters Communicate?

When it comes to communication, every animal has a different way of communicating.

We, humans, use our vocal cords to talk, make words. Dogs and cats use these cords to make up sounds understandable to their species: some animals howl, some bark, some click or whistle.

But all these examples have one thing in common. They all have vocal cords that help them make sounds.

So, what about animals that don’t have these cords? Lobsters are a part of one such kind of animal. They do not have any limbs that will help them vocalize. Hence they are unable to make any sound, whether in joy or agony.

The high-frequency sound we hear when lobsters are boiled is not them screaming. The air inside their body expands due to the high heat but has to get out through small holes in the shellfish’s body. Hence, a sound is produced. How exactly do lobsters communicate, then?

To answer this question, first, we need to know about a phenomenon called ‘Pheromone excretion.’ Pheromones are a very mesmerizing chemical.

When an animal of one species excretes it, it helps convey the emotions/feelings of that animal to another animal of the same species.

In short words, this chemical creates social responses in organisms of the same species. It might be intriguing to know that humans use this factor as well.

And oh well, humans are not the only ones! This is the ultimate way how lobsters communicate as well.

Under the brain, lobsters have their bladder, which preserves the ‘Rosette Gland.’ This gland secretes pheromone chemicals that can be smelled by other animals and work as hormones. But pheromones aren’t injected directly at the opposite lobster.

It might sound off-putting, but the chemical is actually injected into the urine of the lobsters. Lobsters eject this urine towards the opposite lobster, and that’s the message relayed! Yes, weird enough, but lobsters communicate through their urine.

Ejecting urine makes total sense since lobsters release urine from a spot right under their eyes.

Now that we have known how lobsters communicate, what are some common messages they send out? Lobsters live solitarily, and frequently, they need to convey information if they encounter other lobsters. Some of the messages could be:

Female lobsters have the power to smell pheromones pretty strongly. If they like the smell, they will enter the burrow of the male lobster and, of course, urinate at his face to convey the message. This makes the male lobster calm down and let the female enter his burrow. If they like each other after a few rounds of urine spilling, they mate!

This way of communication works in all kinds of attraction-related conversations that lobsters do.

If a male lobster wants to mate with a female lobster, he secretes urine and sends the message!

Sometimes, the female partner even decides if she wants to breed or not, depending on whether she likes the smell of his pee.

A less known (but corny) fact: male lobsters fight for mating with a female lobster. They have a particular hierarchy order, and the fight for dominance is widespread. The lobster that wins the battle becomes known as the most dominant.

If an unknown male enters the burrow, the owner pees on his face and lets him know that he rules this place and gets to have his choice of companion. So dramatic, huh!

But all lobsters usually have complete faith in this social order, respecting the dominant with no judgment.

Therefore, these were the most common texts lobsters send through their peeing. But sometimes, the message cannot be as complex.

They might take a dig on someone just because they recognize them or want to show aggression.

As interesting as their way of communication is, lobsters are indeed an exciting group of animals in many other ways. Some of the fascinating facts are:

As we mentioned before, lobsters do not chew their food right away. They take it to the stomach, and that’s where the teeth are.

But another interesting fact- lobsters do not taste food with their mouth. Their legs have a special kind of hair called chemosensory hairs that help them taste the food.

Lobsters are ruthless and unforgiving when it comes to the food business. If there is not enough food available, they will intake more undersized lobsters and finish their meal.

Doing this is more logical for lobsters because they are known to consume a large amount of food when they molt.

The more food they intake, the more energy they will have to build new shells. Hence, if food is scarce, they consume smaller lobsters. Sometimes they eat the molten shell as well.

Females Choose the Time for Fertilization

After mating, the male lobsters release their sperm packets in the female’s receptacles. But the females don’t let their eggs be instantly fertilized.

The females can store the sperm for as long as 15 months. Depending on the atmospheric conditions, she can decide when to fertilize her eggs within this time.

During this situation, females look for the ideal condition to grow their offspring in. If the location is too cold or the temperature is incorrect, the female lobsters will wait until they find a warmer place.

Therefore, those were some of the interesting facts about lobsters and their way of living.

Lobsters are an intriguing group of sea animals that have different ways of carrying out their physiological functions.

But like every animal, lobsters need to communicate with each other as well. Despite having no vocal cords, they have been built with a fascinating chemical factor that helps send out their feelings and thoughts.

Therefore, if you ever wondered, “how do lobsters communicate?” we hope this article helped you find the answers!

It is truly an unforgettable piece of information as not all creatures talk through their urine! Maybe you can try showing off this interesting fact to your friends the next time you visit a marine park.