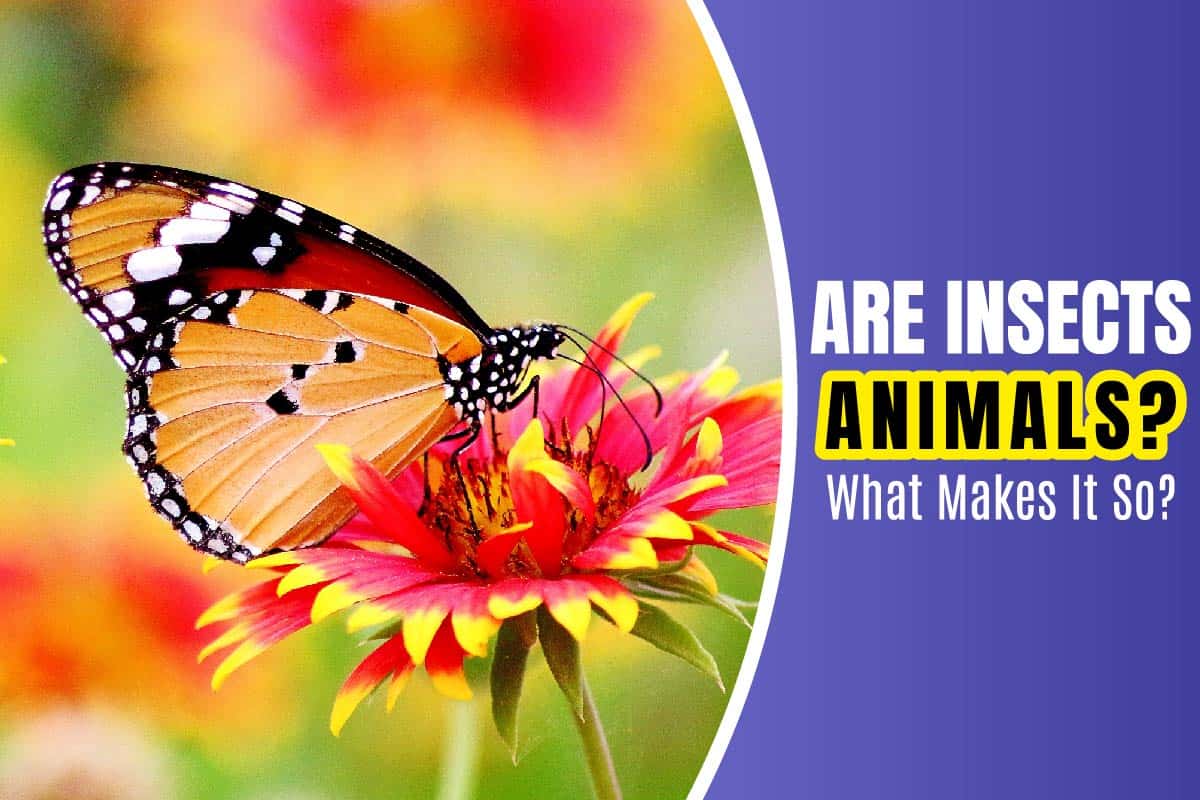 The peculiar appearance of many insects has left humans in awe, sometimes in fear for thousands of years. It would be natural if you wondered, are insects animals? No matter how they look, they belong to the animal kingdom, just like you.

The confusion partially comes from the confusion of words like animals and mammals. Sometimes, we unknowingly think only mammals can be called animals. We find similar questions from time to time about sharks being fishes or calling lobster an insect.

But how would you differentiate between a mammal and other animals? What’s stopping us from calling insects something other than animals entirely? Let’s find out! Our first stop is Taxonomy!

Taxonomy: How Living Beings Are Classified?

All living things diverge from a specific point, or you might say a “common ancestor.” The study of classifying animals into different groups is called taxonomy.

You might have heard of a few levels of taxonomy such as phylum, class, genus, species, etc. There are a total of eight groupings under “Life.” “Homo Sapiens” is our species, and we are in the Chordata phylum and Mammalia class.

The levels or groups of taxonomy are primarily based on the outward appearances of living organisms, how they survive, genetic structure, etc. For example, being a “Chordate” means we have backbones. Being a “Mammal” means having glands that can produce milk for offspring. All these features are based on how we look, our anatomy, and how we survive.

What Do You Call An “Animal?”

All living things cannot be called “animals,” although life stemmed from the same source. Phylogeny studies the history of life, and it gave birth to “Taxonomy” as a way to classify the living realm. The “kingdom” grouping differentiates between animals, plants, fungi, and single-cell organisms.

We start from the largest possible group and make smaller chunks. Animalia is the kingdom of the things we call animals, just like plants are in the kingdom of “Plantae.” Fungi are so vast that they got their own kingdom, so do protozoa and bacteria.

Humans, insects, fishes, sharks, apes all start from one place, and that is “Animalia.” This is because all animals have one common source, just like all plants started from one.

Where Do Insects Belong?

Insects are in the kingdom of animals (Animalia). However, they diverge from humans from way up the taxonomy chain, just after kingdom. Humans and insects had one common ancestor, but that was 500 million years ago.

The phylum of insects is “Arthropoda.” The word arthropod denotes that it has jointed legs. This is also a defining trait of insects, along with an exoskeleton. Also, the body of an adult insect can be segmented into three definite parts.

Besides the head, thorax, and abdomen, which are the main parts of an insect, many of them have wings. It might come as a shock for you, but insects cover 74% of animal species that are known to us. They are everywhere! You might find them on the ocean floor, inside a volcano, and of course, in your bed.

The communication between insects is also unique, and some generate sound by rubbing their wings or legs. A few are known to communicate through light.

We had discovered fossils from Paleozoic Era when dragonflies had a wingspan of 28 inches! It is important to note the evolution of many insects took place side-by-side with prehistoric floral plants.

Are All Arthropods Insects?

All arthropods are not necessarily insects. Insects belong to a species of the class “Insecta.” The most distinguishing feature of the insects is their three-segment body we discussed, along with two antennas. Some arthropods have way more legs than insects.

Another important difference between arthropods and insects is the life cycle. Most of the insects pass a state called “larvae” and have to go through a tough process called “metamorphosis” to finally spread their wings (both literally and figuratively).

Metamorphosis actually intrigued humans for a long time and might be a source of confusion around insects for a place in the animal kingdom.

Food habits can also be a distinguisher for insects. In tropical places like Thailand or the rainforests of Brazil, some insects survive on tears of human beings or other animals like cows, horses, etc.

Some insects even live on blood. We know you are already thinking of that annoying mosquito and its bloodthirsty sting, but there are also flies and moths who are after your blood as well.

Insects are also known for forming colonies, unlike most other arthropods. For example, you may find a colony of ants in your home or a beehive. The higher-level communication between insects is still unclear. However, we know for sure that they communicate about mating, food, and possible danger.

Insects have really shown superior adaptability, as Darwin mentioned. Eggs of some insects can even survive inside the stomach of humans or birds. From time to time, scientists are getting astounded by discovering the evolutionary secrets of animals.

So far, we have discussed how living beings have been classified using appearance, behavior, body structure, etc. However, this is not the only system to classify living things.

Recently, scientists are utilizing gene technology to see how organisms relate to each other. You would be stunned to know that although many organisms can share identical outward appearances, their DNA sequences are completely different.

In view of the recent discoveries, there might come a time when insects may get a kingdom of their own. However, there is still enough genetic and evolutionary proof to keep insects in our kingdom.

We define most insects as “pests” and think they bring only harm. A few insects are known for spreading deadly diseases, for example, malaria, dengue and some can latch onto our skin and drink blood (ticks). Also, some insects greatly damage crops and harvests.

Despite the harm, the world economy is also hugely benefitted by the presence of insects. For example, without silkworms (yes, we call them worms but not a worm), there would not be any silk! The bees are producing honey, and humans have domesticated them in many areas.

Insects are an important part of biodiversity and the food chain. A lot of animals (including humans of some regions) are dependent on insects for protein and other nutrients. Around three thousand ethnic groups consume insects as food on a daily basis.

Since Insects Are Animals, Do They Have Welfare?

Until now, we have talked about the scientific background of insects being animals. As you know, there are laws in place to protect different animals from harm.

The legislation of the United States of America and most other countries who care to have laws for animals do not have any laws in place against the pain and suffering of insects. They are considered “lower-ordered” animals.

Most animal laws are based on “pain and suffering,” and scientific research showed that insects do not feel these negative emotions like humans or other common animals we see — cow, deer, fox, etc.

However, there has been a wind of change in recent times since human perception of suffering might not be analogous to that of insects.

We are experiencing the devastating effects of not having insects included in animal welfare by the exponential decrease in the number of bees. Bee, which is an insect, is primarily responsible for pollination.

Without pollination, trees will go extinct. You can imagine the collapse that will happen in the environment after bees go extinct. Not only bees, but a German report also showed a drop of 82 percent in their insect population.

While we discuss the origin of life and the universe and the biodiversity around us, questions such as, are insects animals and do whales lay eggs can often emerge. These questions can lead us to amazing discoveries.

From everything we have discussed so far, we find insects are indeed animals! And they are living, breathing organisms that deserve a place on Earth just like we do. Our common ancestor makes us part of the same group, and we must coexist to keep the biodiversity of Earth intact.