What Happens When An Offender Is Released? All You Need To Know 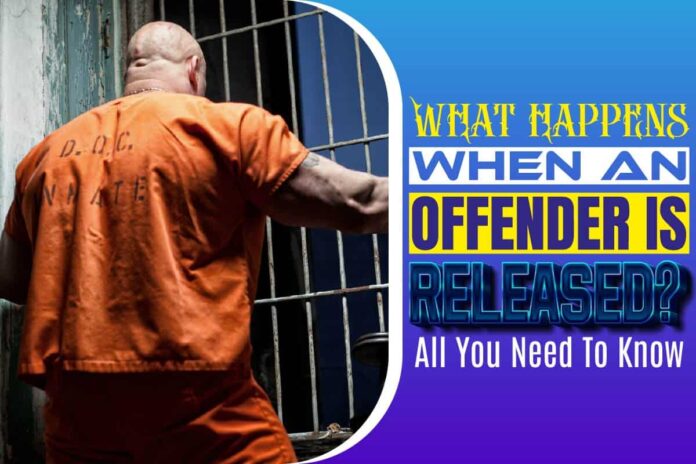 When offenders have completed their sentence, the State will send them to either the state-supervised parole or county-level management, widely known as post-release community management.

While the non-sex offenders and non-violent inmates are sent to post-release community management centers.

By law, all parolees (inmates released on parole) need to return to the region that was their last legal residence before they were imprisoned.

Though, a parolee can be sent to another county if it’s in the public’s best interest.

Also, inmates who have completed their sentence and are sent to State-managed parole will be assigned parole officers who are community members where the released inmate will be residing.

All parolees should abide by the conditions of their parole such as, not having any form of contact with the victim’s family or the victim themselves, and many more.

Prepare for the long haul

After your loved one gets released from a correctional facility, the first few hours after that can be very critical. The reentry process can take longer, as it consists of counseling and education before looking for housing and a job.

Be there for them physically

Once your loved one tells you the day he will be released, ensure that you’re there for them so they can have the feeling that they are not alone.

Pick them from the correctional facility and take them home with you or wherever you both decided that they will stay.

If they’re coming back to your community with you, walk with them so they don’t have to enter the neighborhood alone. These little things will mean a lot to them because they still feel alone and afraid most of the time.

Help them plan their future

You need to understand that your loved one just came out of prison and has no one but you and your family. Furthermore, you know that humans need some necessities to survive.

They need housing, clothing, food, and much more. So, you need to sit with them and discuss the way forward. Please give them accommodation before they get back up on their feet.

Ask them if they would like to start working as soon as possible, or perhaps they want to stay off the radar for a while.

Whatever option they choose, learn to support them. Don’t pressure them to get back to normalcy because the life they left outside before going in may not be the same now that they are out.

Be realistic about the transition

In most cases, a released inmate’s release plan will have an address where they are supposed to go and live, and he might decide to go there, as against going home with you.

Please don’t feel bad about their decision; instead, support them until they are strong enough to come home with you. Make sure you lower the expectations that you have of their transition period.

Understand that things may get tough

Your loved one may have paid his debt to society, but at the same time, he may have picked up a few habits in prison. For instance, someone who wasn’t smoking before may now begin to smoke.

He may be talkative in the past, but now, he doesn’t talk much but only to watch and observe. Indeed, there will be several readjustment challenges that you will face.

However, make sure you’re ready for them.

Brace up for conflicts

The first few weeks will be the toughest. Your loved one’s insecurity might push them to get on your nerves, kindly bear with them and settle any disputes before it escalates.

Try to stay one step ahead of your loved one by contacting their correctional officers to know the type of person they have now become. Prison changes people for better and for worse.

Can you get Post Traumatic Stress Disorder (PTSD) from going to jail?

PTSD is a common mental disorder that makes people feel miserable and sad. There are different types of stress in life that make someone feel depressed.

Getting sentenced to jail is among the reasons that can make anybody depressed and stressed.

The Psychological Impact Of Imprisonment

A prisoner or offender is any person who is legally kept in prison as they await trial or as punishment for their crime(s).

Imprisonment can be very traumatic for the inmate because they no longer have freedom of movement.

Prisoners are under huge stress physically and mentally, leading to psychological changes that extend to a depressed state of mind.

Researchers refer to prison as a house of mental problems.

If inmates who’re already living with mental problems get into a prison cell, their situation will get worse. At the same time, those with no mental illness history are more likely to develop it while in prison.

Being locked up in prison can affect the behavior and thinking of an individual and make them depressed. However, the psychological and emotional impact on each inmate differs with time, place, and situation.

Even when they get released, most prisoners still relive their prison experience, which frightens them and gets them depressed. An inmate who was exposed to pain, fear, and loneliness will likely be depressed.

Causes Of Depression In Prisoners

Many factors can cause depression in prisoners; however, here are some of the most common factors that can cause anxiety and depression.

Correctional centers are structured and designed to keep an inmate in a confined space. The more time a person spends in prison, the more likely they are to become depressed.

Furthermore, this depression can continue even after they have served their time.

While in prison, most offenders will often have a flashback on what they did to get sentenced to jail. They could become remorseful and regret their actions.

A constant replay of the events may result in intense depression.

Even when they are out, most prisoners will still be hunted by whatever they did that got them locked up for a lengthy period.

And when the inmate gets isolated from their friends and families, it could affect their mental health, thereby leading to depression.

They’ll begin to imagine what’s going on outside the prison walls and what’s happening with their family, friends, and their spouse if any.

Thoughts like these can lead to anxiety, fear, and depression.

Living with other prisoners

The prison yard is filled with people, from the most violent to the less violent. Living with such criminals could also affect the inmate’s mental health, making them insecure, scared, and depressed.

Symptoms Of Depression In Released Prisoners

In prison, there are many iron bars in the form of cell blocks, so inmates are used to seeing this all day long.

When an inmate gets released from prison, the sight of iron bars could trigger an emotional reaction like fear and anxiety, which could often lead to intense depression.

They may feel trapped even in their homes as long as there is a gate securing the house.

Most times, after an inmate gets released, and they get home with a family member and find out that the world has moved on without them, they could start having negative thoughts and fall into depression.

For example, most of the things the inmate loved doing before imprisonment could be out of fashion. Their lover could have moved one, and many other things may have happened.

Some of them could become suicidal, which is why you need to keep an eye on them after they get released. The first month outside prison is very critical as they begin the process of reentering society.

The released offender may conclude that they are no longer helpful to society, lose their mind and get furious since everyone has moved on without them.

This loss of confidence in themselves could lead to depression which might extend to suicidal thoughts, so always be on the lookout.

You now have to help them settle down and get used to the way things work at the moment because if their time served inside the prison was five years, a lot of things could happen in that timeframe.

Lack of appetite and sleep

When this happens, know that they are restless and have many things going on in their mind. It could be that they haven’t fully gotten the prison time off their chest and are on their way to depression.

Engage them, take them out to meet old friends who won’t see them as an ex-convict but the person they once were.

A change of scenery can also make a released prisoner restless and nervous. Someone who was once very outspoken, all of a sudden, they don’t talk much.

They prefer to stay on their own and not mingle with anyone because that was how they lived inside prison.

Many released prisoners are a shadow of themselves because they are suffering from post-traumatic stress disorders from what they saw inside prison, making them depressed.

Depression is real; cater for your loved ones after they get sent back into society.

Jakehttps://talkradionews.com
Jake is a passionate entrepreneur and writer who likes to spend a large chunk of his time researching, reading and writing. He aims to keep web surfers engaged with the latest news and articles on a wide range of topics. When he's not writing, he's busy catching a tan on the beach in Florida.
Previous articleChinese Shoe Size Vs. US Shoe Size – How Different Are They?
Next articleWhat Does A Black American Flag Mean? Check Out The Meaning

Why Should You Wear a Helmet When Cycling?

Why Do You Have to Write so Many Papers in College?

What Happens When An Offender Is Released? All You Need To Know