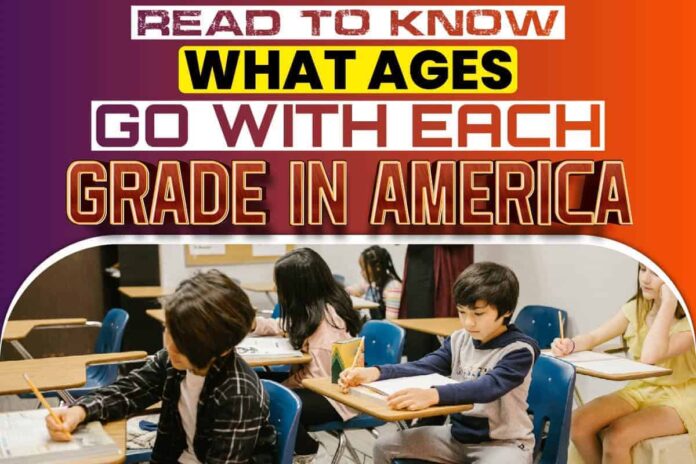 Child education in the United States is compulsory. There is no room for not educating a child. State laws ensure this.

Parents have various options for their children to receive a formal education. So, whether the child is a preschooler, grade-schooler, or teenager, there are provisions for them in the American educational system.

This post discusses the ages that go with each age grade and what you should expect at each level of your child’s education as a parent or guardian in the United States.

What ages go with each grade in America?

Formal education in the United States is in educational stages or grades. Children are placed in these each grade according to their ages.

Below is a breakdown of the different grades in the American educational system and the age that goes with it.

Preschool is an early childhood education in many schools and organizations. It is simply to give kids a head start in their educational journey. Parents may choose to put their kids in preschool or not. It isn’t compulsory.

The preschool initiative was a federally funded project upon its inception in 1965. Initially, it was to help children from low-income families to succeed better at their education. Things have changed now, though. Preschools are no longer the sole project of the government.

American preschools can teach one subject (arts, languages, etc.) or give general education. Over the years, there has been a rise in the number of specialized preschools in the country, even though many of them still try to incorporate general education into their curriculum.

Although it isn’t compulsory to enroll your kids in preschool, educators advise that you do. Currently, 69% of four-year-old kids in the United States get enrolled in preschool. Bear in mind that preschool age is 3-5.

K-12 is the public school educational system that requires kids to attend school from kindergarten to grade 12. All children in America must attend school. They are either homeschooled or attend a private or a public school.

The age for kids to start and be in school might differ from state to state. This difference doesn’t change the fact that all American kids must attend school. It is unlawful for them not to.

State laws determine a lot about a child’s education. For example, some states require that a child remain in school till they are 18. Other states may allow a child to leave high school between ages 14-17 as long as they have their parents’ permission.

Public schools are the most common schooling option for parents in the United States. According to a study by the government, 85% of students get enrolled in public schools, while a small fraction attends private schools.

The large population in public schools is mainly because the schools are usually tax-subsidized. The extent of the tax subsidization varies from state to state.

How Are Children Placed In Different Grades?

Different schools have different ways they determine grade placement. But most schools use the child’s birthday. So, they use the school’s cut-off date with the child’s age to know whether to enroll the child in a higher or lower class.

This method is the most commonly used method. For example, if the cut-off date is at the beginning of September and the child’s birthday is in August, then the school might place the child in a higher class. So, a child might be placed in grade 12 instead of grade 11 because of their birthday.

The schools take great care to ensure that the children’s age, grade, and academic goals all align for the child’s benefit. Typically, K-12 children move from one grade to another yearly. But, if a student fails or performs below expectations, they retake a grade.

Elementary Education In The United States

The different schooling options (private, public, and homeschooling) have made room for variations in education. Children in kindergarten down to 4th-8th grade are all in elementary school.

Students at this stage take all their lessons in one classroom. The only exceptions might be for specialized subjects like a library, art class, or physical education.

The subjects covered at this educational stage are usually basic subjects like math, English, basic science, etc. In the United States, each grade has approximately 3.6 million students. This number is according to a 2001 census.

This curriculum gets selected with textbooks and guides that mirror the learning standards of the state. Recently, schools in different states have started to use the standard core curriculum.

Therefore, the standards of some state schools are different from others because they know that learning is more than having a general curriculum. Some state and private schools allow their teachers to contribute to designing and structuring the curriculum.

There is a clear difference between curricular decisions made in public schools and private schools. Private schools usually have more leeway, while Public schools strictly follow the No Child Left Behind (NOLB) route. This strict following is mainly for elementary and secondary education.

Secondary Education In The United States

The United States secondary school education consists of middle school and High school. Students in the secondary stage of their educational journey are at liberty to move to different classes and choose most subjects.

The grades classified as middle School or junior high School differ from state to state. In some states, middle schoolers include 7th and 8th graders. At the same time, some others have 6th to 9th graders.

High school students take a broad range of subjects and do not specialize in any yet. They also take different courses that are compulsory and get the opportunity to choose 1-3 other subjects (electives) to fill their learning time.

Every state has its requirement for how long students should take certain mandatory subjects. These mandatory requirements don’t always follow a pattern. Students take maths, science, and English classes for about 2-4 years.

High schools also offer Honors, advanced placement, and vocational education courses. These courses are more complex than standard classes. You can see it in the velocity with which the lessons occur.

11th or 12th graders can take Honor or advanced placement courses, depending on the school. Some students take it as early as 9th grade. International schools in the United States offer international school leaving certification to high school students if they studied for it.

How Is The Public School Run?

In the United States of America, the state and local governments are responsible for all the fundamental educational concerns in the country. K-12 students either attend paid private schools or public schools for free.

Public schools stay afloat with funding from the federal, state, and local governments. But keep in mind that public schools in different regions have different amounts of resources available to them. This difference is because local property taxes are the source of schools’ revenue. So, it influences the help they can get.

In the United state public schools, curricular decisions are often the responsibility of the state and local government. The federal government has a limited influence on the running of public schools. They rarely ever get involved.

Jakehttps://talkradionews.com
Jake is a passionate entrepreneur and writer who likes to spend a large chunk of his time researching, reading and writing. He aims to keep web surfers engaged with the latest news and articles on a wide range of topics. When he's not writing, he's busy catching a tan on the beach in Florida.
Previous articleWhy Mythbusters Cancelled? Check Out The Reason
Next articleDoes Microsoft Own Google? Are They The Same Company?

Should I Put My Race On A Job Application? Read Before Taking Action

Why Is Back In Parking Prohibited? Check Out The Reason

Are Insects Animals? What Makes It So?