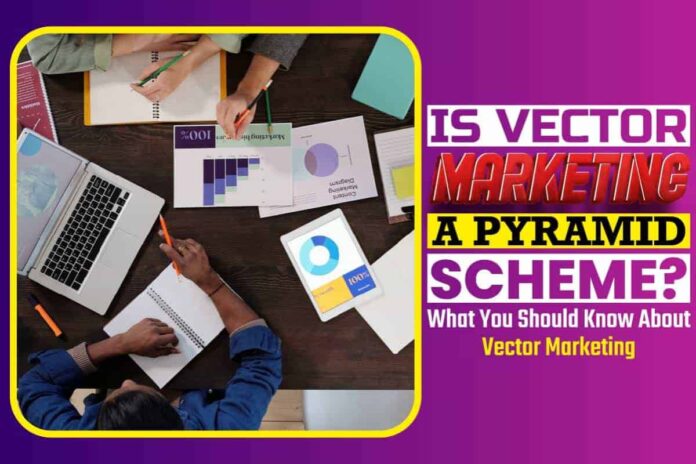 While Vector itself has denied being a multilevel marketing company, many still believe it is another pyramid scheme scam. According to the Los Angeles Times, Vector meets all requirements set by the Federal Trades Commission and can be defined as a multilevel marketing organization. The company is the sales and marketing division of Cutco, a company known for making products like scissors and knives. Many people believe that the company is unethical with its single-level direct sales policies.

So, Is Vector Marketing a Pyramid Scheme?

No, Vector marketing is not a pyramid scheme because it sells a product to consumers.

Vector marketing was founded in 1981 in Philadelphia, Pennsylvania. It is a subsidiary of Cutco corporation known for manufacturing cutleries. The company was set up as a joint venture between Case cutlery and Alcoa.

Vector marketing was set up as an independent marketer and seller of Cutco’s cutleries. In 1985, another company-Alcas purchased Vector in a buyout agreement; hence the founders had to put the company under new management. In 2019 alone, Vector marketing reported a gross profit of $ 273.8 million in sales.

Vector was founded in 1981 in Philadelphia, Pennsylvania. It sells cutleries and some other household tools. The company operates through its representatives that register and become members. Products are sold through home visits, and representatives earn commission from all sales. Many will argue that the company’s sales strategy is quite deceptive. There have also been numerous lawsuits filed against the company, especially over its sales structures and treatment of its salespeople.

Vector sends out job and interview offers that can be similar to other multilevel marketing company offers. Vector marketing has become one of the largest recruiters of undergraduate students in the United States of America.

Anyone can become a distributor, and you don’t need work experience since you will be trained before you commence the job.

What Does A Vector Market Representative Do?

As a representative of this company, you need to set up virtual appointments with potential customers. You will help customers identify the perfect set of Cutco products that meet their needs.

The company believes that most customers who see Cutco products end up buying something; hence, it creates a safety net for its representatives. The company boasts of having more than 15 million American households using their products today.

What Do You Sell For Vector Marketing?

When you learn how to sell and effectively communicate with customers, you will develop a skill that will be relevant wherever you go. This is the reason why Vector marketing conducts introductory training for all representatives. By the time you finish this training, you will have all the confidence to sell your first Cutco cutlery. The skills you develop here will help you achieve success with Cutco products marketing and your future endeavor.

What Are Cutco And Vector Marketing’s Most Popular Products?

Though Vector has a wide range of products it sells nationwide, its Knife block sets remain the most popular.

All products sold by Vector come with the “Forever Guarantee,” and you can sharpen them for free. The ultimate Cutco set comprises 32 pieces plus an Oak block that can be purchased in a cherry or honey finishing. There is also the Homemaker set that comes with 10 pieces of cutleries.

The following are some of the most frequently asked questions about Vector marketing;

1. How do You Make Money with Vector Marketing?

Vector marketing pays its representative weekly through a check, as long as they are working. Reps can earn a base salary of between $15 and $18when they present Cutco products to customers. Though they don’t have to sell the products, they are expected to do their best to convince them to purchase them. The base pay is not an hourly rate, but they get the amount based on the perception that it can take up to 45 minutes or an hour to show a prospective customer the product. Showing the products can be done virtually or in person.

2. How Much Does it Cost to Join Vector Marketing?

Unlike many other MLM businesses, joining Vector marketing doesn’t cost you a dime, but you need to undergo beginner training to become a representative. Upon completing the training, you will get a complimentary sample set of Cutco knives for demonstrations.

You are expected to return any sample product if you quit the Vector marketing program. Failure TO return a complimentary product may mean you will be forced to pay for it.

3. What is Vector’s Approval Rating?

Vector currently has an A+ BBB rating. It is a direct sales multilevel marketing company. But here, you don’t have to recruit members under you as long as you advertise and generate sales. There are more than 5,000 representatives or distributors currently working for Vector marketing.

Vector Marketing has had its fair share of numerous lawsuits, and it seems the cases keep getting worse every few years.

In 1990, for instance, the Arizona State Attorney General sued the company for recruiting some techniques that he termed “Deceptive.” In 1994, a court injunction included an order for the company to stop every form of deceptive recruiting in the state of Wisconsin.

In 2008, Vector marketing was hit with a class-action suit. The case was instituted when it was discovered that they were not paying their sales representatives the minimum wage, as required by law. The company eventually settled the case out of court after paying about $13 million to the victims in 2011.

In 2014, another legal issue came up against the company from several states who accused the company of refusing to pay the minimum wage. The states that brought the suits include; California, New York, Illinois, Ohio, Michigan, Florida, and Missouri. This was one of the most difficult years in the history of Vector Marketing as regards settling legal issues.

In the same 2014, the company was sued by one of its distributors for not getting the proper training. She was drugged and molested while on a sales call. The end of this lawsuit remains a secret until this day, but many believed the company might have settled out of court with the victim.

In 2017, Vector marketing was forced to pay the sum of $6.75 million to settle another major lawsuit. According to the defendants, sales representatives that attended the mandatory training were not paid that year. In the same year, another class-action lawsuit was filed against the company by its division managers. The division managers believed they should be compensated as employees and not contractors.

Though Vector marketing was able to settle itself out of most of these numerous cases, they, however, didn’t help the image of the company. Many potential representatives opted out or didn’t sign up for the program after a perceived bad reputation of the company. From 2018 till now, the company seems to have had some respite from lawsuits, and the annual turnover profit seems to be working in the company’s favor.

Conclusion: Is Vector Marketing A Scam?

No, Vector marketing is not a scam because there are more positives than negatives here. First, it is one of the very few multilevel marketing companies that offer a base salary. Most other companies will only compensate their representatives in the form of commission from sales. Though the company claimed they are not operating a multilevel marketing system, and this is true to some extent because you don’t have to recruit anyone under you. The word of mouth and virtual marketing the representatives deploy seem to make the system look like another MLM.

Making money on Vector marketing is purely dependent on the input you make. In addition to your base salary, you will earn commission on every product you sell. This is a double way of making an income doing what you enjoy doing. Some representatives are okay with their base salaries and go on to generate very few sales at the end of each month. What even makes the Vector marketing system much easier than other MLM companies is that their products are much needed in any home. Kitchen cutleries are essential components that everyone uses from day to day; hence they can be easily marketed to everyone.

Jakehttps://talkradionews.com
Jake is a passionate entrepreneur and writer who likes to spend a large chunk of his time researching, reading and writing. He aims to keep web surfers engaged with the latest news and articles on a wide range of topics. When he's not writing, he's busy catching a tan on the beach in Florida.
Previous article5 Ways Music Can Make You a Better Student
Next articleHow Modern Tech Will Change the Poker Industry

Is Chemical Guys Worth It? Here’s What You Should Know