12 Animals That Can’t Swim! Get To Know About Them 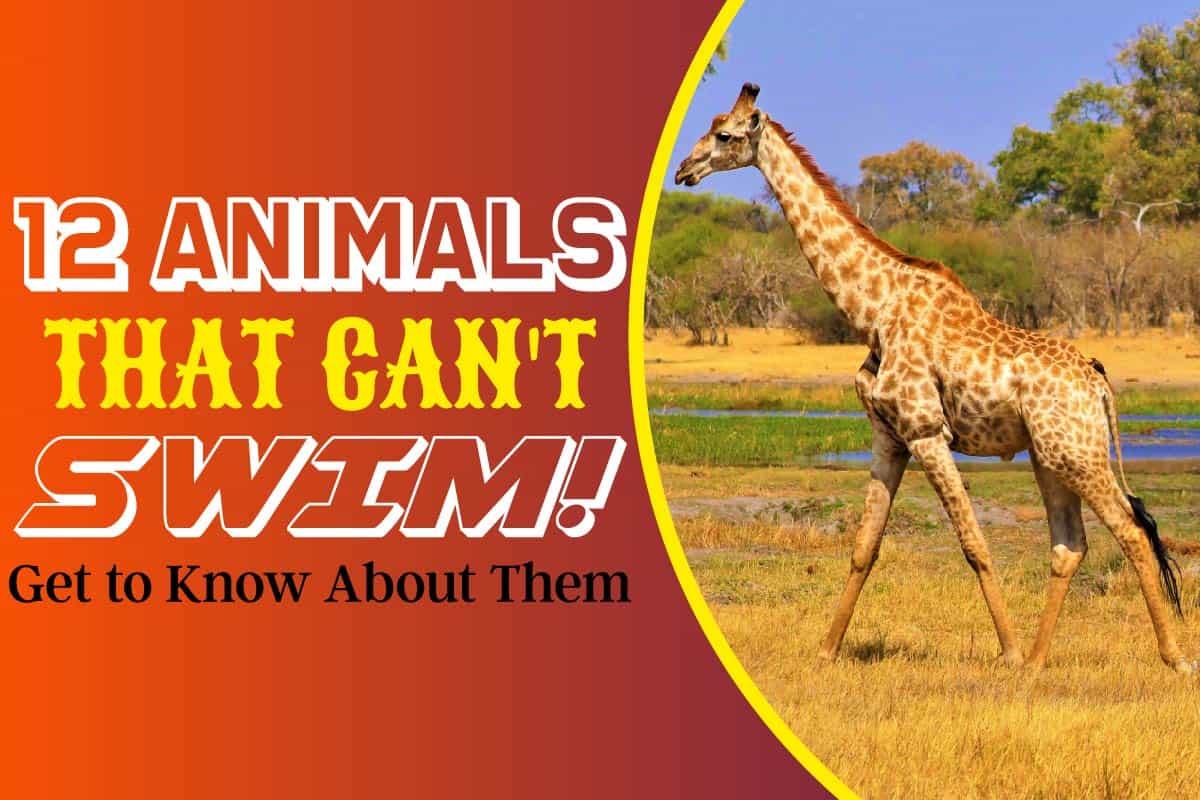 Animals have been known to survive in this world with the help of their different abilities and expertise. Swimming is one such ability that helps different animals to survive underwater.

The major portion of our planet Earth is filled with water, so you might assume that all animals might learn to swim in some way. You will be astonished to find out that there are many interesting animals that can’t swim. Despite their inability to swim, they bear their own survival talents.

You are probably unaware that many animals, including mammals, can’t swim. If you’re curious about these animals, keep reading to find out more about them.

Here is a complete list of the animals that cannot swim underwater:

Surprised with the list? Let’s talk in detail about this list of animals who cannot take a dive into water:

Camels are one of those animals that cannot swim underwater, except a rare breed which is the Kharai breed of Kutch. This breed swims quite well and can live on saline plants for food. Apart from them, no other camel can swim.

Camels grow under environmental conditions with a scarcity of water. This is why they have to drink a high quantity of water at a stretch and later store it in their bloodstream for survival.

So, except for the Kharai breed, no other camel breed can swim.

Giraffes also cannot swim, and you might be guessing the reason already. Giraffes are the tallest mammals in the world, which gives them a disadvantage most of the time.

Giraffes have very long necks and long legs, which does not allow them to move through the water at a steady and rapid rate to swim. With the weight of these long legs, the giraffe loses the energy to advance in a forward and backward motion for swimming.

Their neck would also be uncomfortable to move during swimming, which is also one of the reasons they cannot swim. Thus, due to disproportionate body size, giraffes are unable to swim underwater.

Shocked to find tortoise in the list? Well, it’s true. Tortoises and turtles are both different; while turtles can swim underwater, tortoises can’t swim.

This is because turtles have flippers as part of their feet, which helps them to swim. Turtles also have a lightweight shell that facilitates swimming. However, with tortoises, that is not the case.

Tortoises have feet that are stunted and short. Their shells are quite heavy and domed in structure, which also acts as a barrier to their swimming.

Thie features, which are dissimilar to turtles, are what stops them from swimming underwater.

Another shocking animal that can’t swim is the hippopotamus. Although you might’ve assumed that such a noteworthy animal of South Africa which is always seen in the water, should be able to swim, that is not the case.

Hippopotamuses are not actually swimming when they are in the water; they are actually bouncing. They comprise of very heavy bones, and these bones are filled with floatable fat. The combination of the bones and fat help them stay afloat above the water surface, which is more like bouncing.

Gorillas cannot swim, too, in case you didn’t know. Gorillas can do a lot of things, from learning sign languages to communicating with humans. But one thing that they can’t do is swim.

They can prevent themselves from drowning by using sticks to measure the depth of the water. But they do not have any motor movements to stay afloat above the water. This is why gorillas cannot swim.

When you think about peacocks, the one thing that crosses your mind is their beautiful and colorful feathers. These feathers might be a gorgeous feature they have, but they are futile underwater.

They also possess separate toes and not webbed feet. Ducks can swim with their webbed feet and water-resistant feathers, but peacocks cannot do the same. Their distinct feet and feathers act as a barrier to swimming underwater.

Peacocks also cannot swim underwater since they have to lay eggs and protect their young ones. Snakes are known to prey on peacock eggs and young peachicks. This is another reason why peacocks refrain from water areas.

Ever heard of batfish? They are aquatic animals of the Galapagos Islands, which is why you must be surprised to find them on the list. So, how can aquatic animals that live underwater cannot swim? Crazy, right?

This feature makes them pretty interesting since they are aquatic animals that walk instead of swimming underwater.

You might be surprised to find bulldogs in this list, as most dog breeds are known to swim. However, the bulldog is not one of them.

Bulldogs have brachycephalic traits, which act as a hindrance to swimming. This means bulldogs have short snouts that are not favorable for swimming. They also have a variable weight distribution which is why they find it difficult to swim on their own. However, with a life jacket on, you can make bulldogs stay afloat above the water in case of emergencies.

The black rhinoceros is quite popular due to its multiple talents. However, swimming is not one of them. They are an endangered species and are always at risk of being approached by poachers. Despite being widely popular, they are one of those animals that do not know how to swim underwater.

You should know that rhinoceros are quite heavy and bulky animals. Their mighty size is a hindrance to swimming. With such a heavy body, it gets impossible for a black rhinoceros to stay afloat above water and swim.

Similar to the black rhinoceros, white rhinoceros are also incapable of swimming. They are also pretty large in terms of size, but with a larger body, they comprise of short legs. The combination of a heavy body and small legs acts as a hurdle to swimming underwater.

Confused to find toads in the list of animals that cannot swim? Well, don’t be, because toads are very different from frogs.

You know that frogs can swim because of a lot of different reasons. Frogs have a lightweight body, long legs, and feet that allow them to swim underwater.

However, that is not the case for toads. Toads have a heavy body compared to frogs which act as a barrier to swimming. They also have pretty short legs and feet that do not support their forward and backward movements during swimming.

For this reason, toads are unable to swim.

Owls are one of the best nocturnal hunters out there, but they cannot swim despite all their talents in hunting and surviving.

You might have noticed owls go after their prey near the water, but it is only at the surface level. Anything beyond that is out of reach for owls.

Part of their swimming incapability is their wings. Their wings are not resistant to water, and with water contact, their feathers might lose flight capabilities. This is why owls refrain from going anywhere near water and also why they can’t swim.

Bringing it to the end of the discussion, it is evident that, in reality, most animals cannot swim underwater due to different reasons.

Animals that can’t swim have a defect in their structure, feet, or size, which restrains them from swimming. Other animals are not adaptable to swimming due to their distinct environmental conditions. Although they cannot swim, these animals have their own ways of surviving in their habitats.