Differences Between  DS, 2DS, And 3DS: The Nintendo World 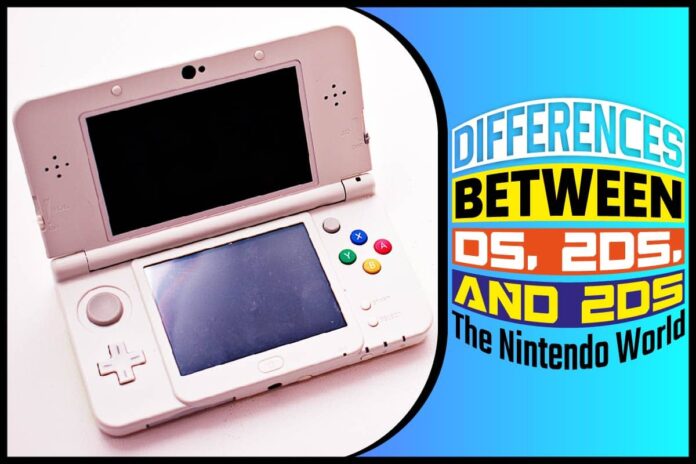 Nintendo, based in Japan, has grown from a humble playing-card company to a multinational giant in the video game industry. Over the years, it has been fascinating how long way the company has come. Nintendo has a fascinating history and has undergone significant change since it first became the world’s largest video game console manufacturer. The company has been at the forefront of the console gaming industry for the last three decades.

More than a decade has passed since Nintendo released a number of the DS series handheld gaming consoles, including the 3DS and the 2DS. Nintendo devices have undergone numerous iterations, making it difficult to determine which one is the best fit for your needs. The following is all about the Nintendo DS,2DS, and 3DS.

Differences Between DS, 2DS, And 3DS

Nintendo is one of the largest video game industries. It has produces the DS, 2DS, and 3ds. All of the three gaming consoles having outstanding features making it challenging to choose one between them. One way you can choose one from the three is by knowing their differences. It has differences in design, size, games, and many others.

However, most gamers use proper names to distinguish between different Nintendo DS builds. The bulkier hardware of the first-generation Nintendo DS is often referred to as the “DS Phat” by fans.  Nintendo officially refers to it as the “original-style” Nintendo DS.

The Sony PSP, the iPhone, and iPod Touch were direct competitors of the Nintendo DS.  Each with its advantages and disadvantages. The Nintendo DS’s primary function is to play games and entertain the masses. Most game systems today provide an authentic multimedia experience.

There are a few surprises in the system. For instance, each Nintendo DS comes preloaded with PictoChat. It is a picture-based chat program allowing a group of people to communicate in real-time. The Nintendo DS can also connect to a Wi-Fi network, allowing competitive online play in specific titles. Some games require only one game card for up to four players.

The Nintendo DS can also download game demos from game stores that have “DS Download Stations.” Nintendo released an Opera browser for the DS in February 2006. However,  It got phased out ever since. The Nintendo DS has a system’s touch-sensitive screen and built-in microphone. Therefore,  it allows developers to create unique games that one cannot wholly replicate on other systems.

The Nintendo DS has a particularly positive reputation for being a family-friendly machine. Games like “Brain Age,” a puzzle game, and “Nintendogs,” a pet simulator, helped propel the DS’s enormous success. It put it in the hands of children, adults, the elderly, experienced gamers, and beginners.

The puzzle and role-playing games on the Nintendo DS are unparalleled. Platformer games include games such as “New Super Mario Bros” and “Mega Man ZX.” These games have proven that the challenge provided by two-dimensional action games transcends generations. Less conventional games abound as well: “Cooking Mama” can help you prepare a meal, and “Let’s Yoga” and “Let’s Pilates” can help you get in shape.

Nintendo has created a game line called “Touch Generations.” It includes a variety of titles aimed at gamers of all ages and skill levels. “Brain Age,” “Elite Beat Agents,” and “Hotel Dusk: Room 215” are some of the “Touch Generations” titles.

The majority of Nintendo DS games cost between $29 and $35. DS games are frequently on sale at retailers such as Walmart and Amazon. Moreover, also chains such as GameStop sell used titles at reduced prices.

The Nintendo 2DS is a low-cost, entry-level handheld gaming console from Nintendo’s 3DS line. It got released at the end of 2013. It’s a member of Nintendo’s DS line of portable gaming consoles, still one of the best.

It is a more affordable alternative to the original 3DS. It has a slate-like form factor that does not fold, unlike the 3DS. The lack of hinges makes it more durable.

However, it also makes it more difficult to store in a pocket or bag. It reduces portability while increasing durability at the same time. It gets powered by a dual-core ARM11 MPCore processor, a single-core ARM9 processor, and a PICA200 custom GPU.

The original Nintendo 3DS is a handheld console released in 2010 as a potential successor to the already popular Nintendo DS. The good thing about it is that it has backward compatibility to play older DS games. It has a dual-screen handheld with a clamshell design.

The clamshell provides it with a significant advantage in terms of portability and ease of use. It is because you can easily stuff it into your bag or pocket. Unlike the 2DS’s non-foldable design, it has hinges, making it prone to breaking during accidental falls.

The following are some of the differences between Nintendo 2DS and Nintendo 3DS.

Both are part of the Nintendo DS series of dual-screen handheld video game consoles. They have nearly identical features and hardware configurations. The slate tile-inspired 2DS, on the other hand, is distinguished by a sleek form factor similar to the 3DS but lacking hinges.

It has matte plastic, which gives it a toy-like appearance, and it’s a little heavier. The 3DS is undoubtedly the best Nintendo system. It is because of the stereoscopic screen that can provide 3D effects without the use of 3D glasses.

The 2DS is the entry-level model of the original 3DS and has identical hardware, such as the dual-screen with similar screen sizes. The upper screen on both models measures 3.53-inch. However, the lower screen of 2DS is slightly smaller at 3.02-inch. Both devices have LCD screens with a resolution of 400240 px, with the lower screen having a resolution of 320240 px. Unlike the 3DS, the 2DS has a plastic screen encasing the console and divides its flat screen in half.

The 2DS took a different approach to design than its predecessors. It ditched the signature clamshell design in favor of a slate-like design that feels strange to hold. Furthermore, unlike the 3DS, 2DS lacks hinges.

The lack of hinges reduces portability in the console while increasing durability in the long run. Moreover, the 2DS is slightly larger than the 3DS, measuring 127mm versus 74mm. Therefore, making it nearly impossible to fit in most pockets or throw in a bag. The clamshell design protects the 3DS’s screen from accidental falls.

The autostereoscopic screen generates stunning stereoscopic images without the use of any 3D glasses. It’s also known as glass-less 3D because it doesn’t require 3D glasses to see, and it produces stunning 3D-depth effects.

Which One Should You Buy?

Which Is More Expensive?

When it comes to buying the Nintendo gaming consoles, price is among the factors you must consider. The most expensive of the three is the 3DS. What makes it expensive is its autostereoscopic feature. This feature allows users to produce 3D effects without wearing 3D glasses.

if you are a gamer, you should own one of these Nintendo gaming consoles. Nintendo has made the gaming world to be a place where people want to be. The DS, 2DS, and 3DS all have exciting features that make it hard for you to choose one. There are differences between the three in size, screen, design, price, and performance.

Jakehttps://talkradionews.com
Jake is a passionate entrepreneur and writer who likes to spend a large chunk of his time researching, reading and writing. He aims to keep web surfers engaged with the latest news and articles on a wide range of topics. When he's not writing, he's busy catching a tan on the beach in Florida.
Previous article5 Ways How AI Is Facilitating Business Operations
Next articleAre Pandas A Threat? The Giant Panda

How to Start a Conversation With a Guy?

Why Are Rolex So Expensive?