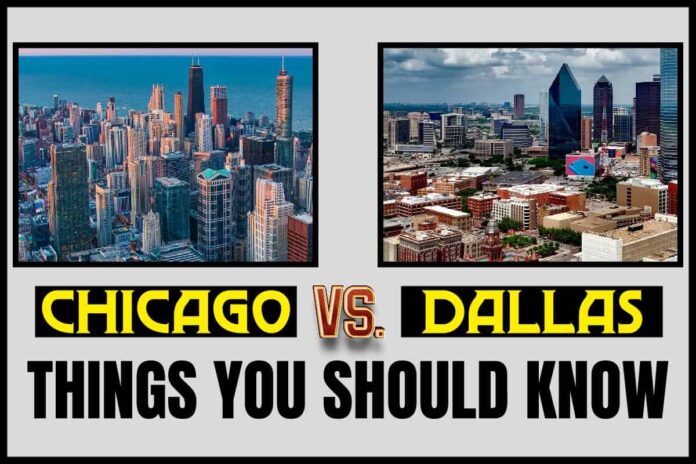 Are you at a point where you have to choose between Chicago and Dallas and need more information to make an informed decision? You’re in the right place!

Both cities are beautiful, boast plenty of things to explore, and have a vibrant nightlife. They could also match any lifestyle. However, there are other features to consider before making a move. These include crime rate, education, healthcare, taxation, job opportunities, cost of living, and housing.

So, which is more suitable to move to and why? What differentiates both cities? Let’s dig deeper. After reading and comparing both cities, you should be able to make a decision.

A Comparison Between Chicago Vs. Dallas

The best way to decide where to reside among the numerous options out there is to make a thorough comparison. How well can you cope in either city, given your current income and other factors? Let’s look at what both cities have to offer.

Cost Of Living – Dallas Vs. Chicago

Firstly, let’s examine the cost of living in both cities. Cost of living is a crucial factor because no one enjoys moving to a new place only to start suffering.

If you’re moving from any part of the United States to either Dallas or Chicago, then you should be confident that your proposed income could sustain you and your family.

Well, Chicago’s cost of living is higher than Dallas’. It’s ranked the 11th most expensive city in the US.

Chicago is on the same level as cities like Boston, Seattle, and San Diego in terms of cost of living.

A typical meal In Dallas should cost around $11 per person. In Chicago, a meal should cost $15. However, how much you’ll end up spending varies based on individual spending habits.

Interestingly, breakfast is less expensive than lunch or dinner. And it’s the same situation in both cities.

In the area of housing, properties in Chicago cost more than in Dallas. If you’re looking to rent an apartment, bear in mind that a two-bedroom would cost you $2,276 per month. But if you’re buying, keep in mind that homes’ typical financial value in Chicago is $299,929.

In Dallas, houses are a bit cheaper, whether you’re buying or renting. If you’re renting, you can find a two-bedroom apartment for $1,270 per month. Homes’ value in Dallas is $270,629.

However, keep in mind that Chicago and Dallas homes’ values are not fixed. It’s adjusted seasonally, and it could depend on several factors.

But the most important thing to remember is that homes in Chicago cost a bit more than homes in Dallas. You can see that from the price comparison here.

In terms of education, Chicago and Dallas are wise choices. You can find a good school in both regions for your kids and yourself. It’s still the same for adults if you wish to further your education.

But then, know that a region’s accumulative spending on education says a lot about the robustness of its educational system. Now, here’s a quick comparison between both cities.

In Chicago, the percentage of people over 25 years who haven’t had a college degree is 10 percent. In Dallas, it’s 10.9 percent.

In addition, the number of students over 25 years who have acquired a professional certificate is 3 percent in Chicago. In Dallas, it’s 2.8 percent.

Chicago boasts a higher number of schools than Dallas. The advantage Dallas has over Chicago is that education is a bit there. So, if you have a large family, your spending on education won’t swallow up a huge chunk of your finances.

Chicago is known to have a world-class public transportation system. Bike Lanes, Chicago Transit Authorities, Metro Commuter Rail, are all available. You’ll also find a taxi with ease to take you to your destination if you don’t wish to use a personal car. You’ll find a huge number of taxis here.

So, Chicago boasts well-developed public transportation and road networks, making it a breeze to move around the city.

On the other hand, Dallas’ transportation system is decent. For the records, this city is home to the longest light rail in the country and boasts a bevy of buses, trolleys, rideshares, and taxis too.

Dallas’s buses and light rail are rapidly growing. It’s safe to say that they are one of the fastest-growing in the country. Additionally, the city’s public transport system facilitates easy access to job areas. Thus, even if you don’t have a personal car, getting to the office won’t be a challenge for you.

However, it’s not easy to drive in Dallas. Why? There are far too many freeways and connections, which can lead to confusion. You’ll also be put off by the number of cars you’ll find on the roads. So, if you’re not a confident driver, then you should consider using public transportation.

You may also want to consider the climatic condition in both regions before deciding where to spend the rest of your life. Let’s share some information about that.

Let’s start with Dallas. The hot seasons in this city last for 3.4 months. It begins in June and ends in September. During the summer period, the average daily temperature can go as high as 88 degrees Fahrenheit.

Dallas’ cool seasons only last for 3 months. It starts in November and ends in February. And the average daily temperature can go below 64 degrees Fahrenheit.

Now, is Dallas dry or humid? Dallas’ climate is humid subtropical, which is a bit shocking. That’s because Dallas is in a region that gets warm and dry winds from north and west during the summertime.

In Chicago, the climatic condition is a bit different. Firstly, its warm season lasts for 3.6 months. It starts in June and ends in September. The average daily temperature you’ll receive can be as high as 73 degrees Fahrenheit.

So, is Chicago dry or humid? The city’s climate is hot-summer humid continental. It experiences all four seasons.

Is taxation a crucial factor to consider before moving to a new city? Yes, it is. It’s good to pay tax since the government depends on it to operate. However, if you move to a city where you have to pay a considerable amount of taxes, you may have little or no savings left by the time you retire.

The amount of tax you’ll pay varies from one city to another. But keep in mind that Dallas doesn’t have a local income tax.

Generally, Texas doesn’t have a state income tax. Its constitution forbids it. What it relies upon instead are use and high sales taxes.

Unlike Dallas, Chicago collects personal income taxes. As long as you’re a resident here, you have to pay federal and state income taxes.

Large cities are rife with dangerous neighborhoods. It happens everywhere and every day.

Consequently, these two cities are not excluded. However, in contrast, Chicago seems to have higher crime rates than Dallas. Chicago currently has 49.9% violent crime. In comparison, Dallas has 37%.

However, not all houses in Dallas and Chicago are prone to these crimes. Both cities still have a host of safe housing options for residents.

This Chicago vs. Dallas comparison shows you things you need to know about both cities. You can use one or more ideas from this post to make an informed decision. So, which is your preferred city?

In Chicago, the cost of living is high compared to Dallas’. Chicago’s crime rate is also higher. But that doesn’t mean that Dallas is crime-free.

Taxation is another factor that one needs to consider before moving into another city. In comparison, Dallas is way cheaper than Chicago in the area of taxation. In Dallas, residents don’t pay income tax. It’s forbidden.

Jakehttps://talkradionews.com
Jake is a passionate entrepreneur and writer who likes to spend a large chunk of his time researching, reading and writing. He aims to keep web surfers engaged with the latest news and articles on a wide range of topics. When he's not writing, he's busy catching a tan on the beach in Florida.
Previous articleWhy Are Fog Lights Yellow: This Is What You Should Know
Next articleQuestion Of The Universe: Is A Worm An Insect?

How Many Coats Of Polyurethane On Wood Countertop Can You Use?

Does Walmart Cash Personal Checks? And Other Money Center Questions

Does AutoZone Do Oil Changes?

Is IBUYPOWER Good? A Detailed Review

How To Copy From Kindle Cloud Reader: The Ultimate Guide